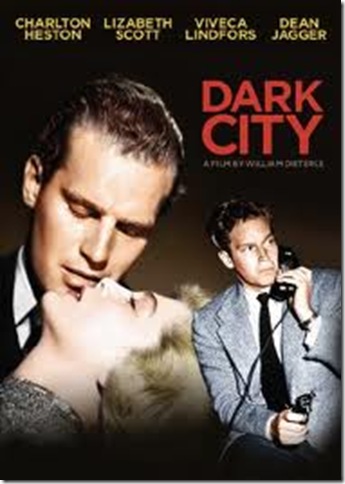 For fans of hard-boiled dialogue, chiaroscuro lighting and moral urban decay, this summer has been Christmas in July, and it doesn’t end with these box sets. The latest noir celebration comes courtesy of Olive Films, which recently unearthed three classics from the Paramount archive. The earliest of these, 1950’s Union Station, is directed by a minor name in the noir pantheon (Rudolph Mate), but it’s a propulsive, pulse-pounding police procedural with William Holden as a railroad lawman trying to solve the case of the kidnapping of a millionaire’s blind daughter. The combative, suspenseful storytelling is full of Langian brutality and complex set pieces: Its characters chase one another in, out and between train cars and up and down unfinished scaffolding. The violence has an unceremonious matter-of-factness, with one ill-fated villain meeting his death via a stampede of cows.

But the true gem here is William Dieterle’s Dark City, perhaps the noirest title ever. It marks the film debut of Charlton Heston, whose linebacker’s shoulders already cut a distinctive, rocklike figure. He plays a two-bit hustler and gambling bookie consumed with guilt over the suicide of a patsy he and his poker-playing pals conned out of five grand. The guilt soon turns to fear – and the textbook noir morphs into proto-slasher horror – as Heston’s coterie of heavies are systematically slain by the dead patsy’s psychopathic brother. Dieterle shows great command of the camera; the poker scene in particular is a memorable montage of close-ups of grimacing, square-jawed fatheads.

Dark City may not be perfect. Dieterle’s choice to reveal the shadow-lurking killer only by the bling on his ring finger – accented with a melodramatically ominous score – is a clunky device even for its time. But the film gets away with sleazy scares one minute and references to Greek mythology the next, and it leaves us cheering for the survival of a two-bit thug.

The weakest entry in this ‘50s trio is Lewis Allen’s Appointment with Danger, an overly talky policier with Alan Ladd as a relentlessly determined cop pursuing the mysterious death of a postal inspector. So much of the story is banal exposition leading to the titular appointment, and the screenplay’s reams of endless jabber make it feel considerably longer than its 89 minutes. I’ve also never been a fan of Ladd’s blank, “unsmiling hardness,” in the words of film historian David Thomson. It may be effective in some parts, but here Ladd is flat and monochromatic, making me yearn for a William Holden, Joel McCrea, or perhaps a Robert Mitchum to bring some emotion into the part. But considering the movie begins with a laughable promotional video for the United States Postal Service, Appointment with Danger is ultimately OK, and it has some grody dialogue I won’t soon forget: “Go swallow a germ,” spits one criminal to his squawking dame. Now that’s noir. 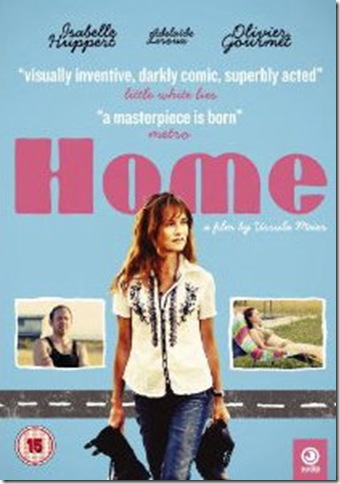 A potent allegory about the unintended consequences of industrial development, first-time Swiss director Ursula Meier’s Home follows Marthe (Isabelle Huppert) and Michel (Olivier Gourmet), parents of three who live in an isolated home next to an abandoned strip of highway, which they’ve turned into an outdoor extension of their house. But when the public land is finally repaved for the construction of fully functioning multilane highway, the family’s world begins to crumble. The loss of privacy is one thing, and practical concerns abound, from how to transfer food and supplies from the roadside to the house amid steady traffic, to the kids making their way to school, to sleeping through the constant barrage of noise – not to mention the possibilities of exhaust fumes and other contaminants affecting the family’s health. Marthe, in particular, can’t handle their new home life but refuses to leave, eventually prompting Michel to imprison the family in walls of cement to block out the noise (and, for most part, oxygen). Changing tones dramatically from its lighthearted opening, Home is a dark and disturbing study of a nuclear family’s collective breakdown that had me thinking back to Michael Haneke’s corrosive 1989 drama The Seventh Continent. Meier, by contrast, at least provides her characters with some light at the end of the highway tunnel. 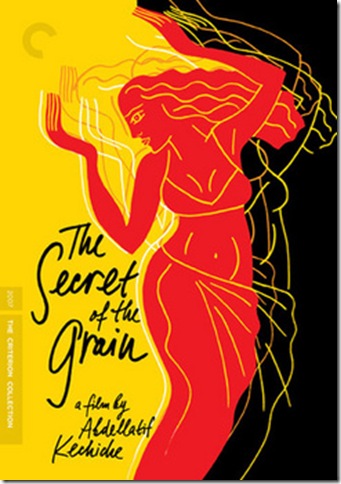 The Secret of the Grain (Criterion)

For a 2½-hour movie, Abdellatif Kechiche’s The Secret of the Grain has relatively few scenes, because each ones plays out like a domestic epic in miniature, building toward a kinetic and unforgettable climax. The story concerns a French-Kurdish family whose sad-faced patriarch, recently nudged out of his longtime construction job, decides to convert a dilapidated houseboat into a thriving restaurant. He encounters resistance all the way, from costs to licensing issues to interfamilial quarrels, with his possible future daughter-in-law his only tried-and-true partner and spokesperson. In his hectic, bustling family scenes, Kechiche has his characters talk over one another in a seemingly scriptless cacophony, brilliantly exhuming Altman and Cassavetes. Not to mention it’s a great food movie, joining the scrumptious pantheon of Babette’s Feast and Big Night. The Secret of the Grain is not without its low-key tragedies, but the film’s tone can best be described as hopeful pragmatism; the movie reflects a world in which downsizing and outsourcing are rampant, but with enough community pride and togetherness, goals can be achieved even when the deck is stacked against you. Criterion’s two-disc set features a new interview with the director and film scholar Ludovic Cortade, an excerpt from a television broadcast on the movie, a new essay by critic Wesley Morris and more. 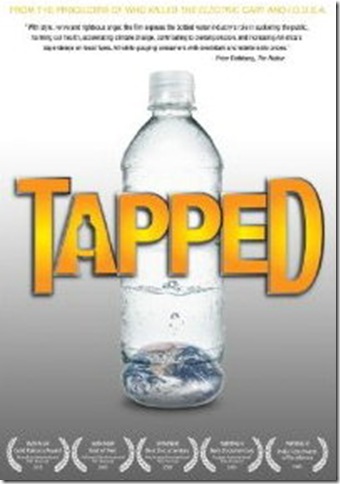 Following to the T the agitprop documentary formula popularized by An Inconvenient Truth, Tapped is the latest feature-length attack on a modern American convenience. Co-directed by Stephanie Soechtig and Jason Lindsey, the 80-minute film identifies bottled water as an evil scourge that is damaging our health (via the harmful chemicals in PET, which is in our plastic water bottles), depleting our natural resources and turning our oceans into soups of discarded plastic (so says one of the emotional, pedigreed experts). Moreover, bottled water is impure – despite the false advertising of its supposedly virginal nature, it’s 40 percent tap water – and like most corporately controlled industries, it’s amoral: Tapped is most effective in its journalistic exposing of the Nestle corporation’s water mining in Maine and other water-fertile states, where, thanks to a legal loophole called absolute dominion, the company is permitted to steal the region’s natural water supply, even when massive droughts force fire trucks to provide basic drinking water. Convincing and possibly even lifestyle-changing, Tapped works better emotionally than intellectually or cinematically, where the directors’ condescending treatment of bottled water executives has more than a whiff of Michael Moore-style manipulation and “gotcha” childishness.

Film: Playwright August Wilson began his chronicle of the African-American experience throughout the … END_OF_DOCUMENT_TOKEN_TO_BE_REPLACED

Film: Just in time with the opening of movie theaters in Palm Beach County comes the season’s most … END_OF_DOCUMENT_TOKEN_TO_BE_REPLACED

Music: The very last concert Franz Joseph Haydn attended in his life was in March 1808, about a year … END_OF_DOCUMENT_TOKEN_TO_BE_REPLACED