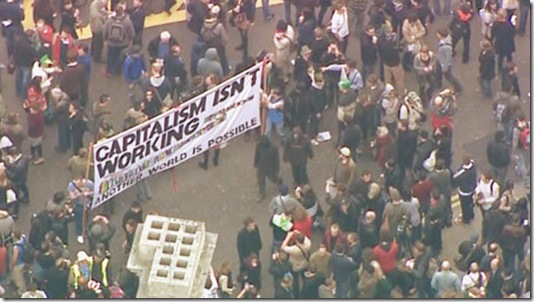 Here’s the long and short of it: Michael Winterbottom and Mat Whitecross’ documentary The Shock Doctrine (Zeitgeist, $26.99) attempts to explain, in 80 minutes, what journalist Naomi Klein proposed in her 600-page best-seller of the same name: that the neoliberal, free-market capitalistic ideas of Milton Friedman are the root cause of our economic perils yesterday, today and tomorrow, whether it’s in South America, Wall Street or the Middle East.

Intellectual compression of this magnitude is a tall order ­– some might say an impossible order – and many areas of Klein’s book get short shrift. Whitecross and Winterbottom rush through important passages about the harmful corporatization of the post-Katrina and post-Indian Ocean tsunami recoveries, while spending too much time on the author’s unconvincing connections between radical sensory-deprivation experiments of the 1950s and the exported economic theories of the so-called Chicago School, spearheaded by Friedman.

But as a handy Cliff’s Notes adaptation of Klein’s polemic, this is a tantalizing film. The Shock Doctrine is a sobering survey across a half-century of economic terrorism; when accompanied by stark archival footage, it makes for a well-paced, comprehensive thriller with clear good guys (John Maynard Keynes, Salvador Allende, surprisingly Richard Nixon) and clear bad guys (Augusto Pinochet, Donald Rumsfeld and Margaret Thatcher, with Friedman positioned as the demonic wizard behind the curtain). Causality is explained ad nauseam, and conclusions are spelled out like summaries at the end of chapters, which I suppose is necessary in a feature of such brevity.

Winterbottom is more famous for his narrative features (The Claim, Code 46, etc.), but he is no stranger to docudrama. His 2006 film The Road to Guantanamo, about a trio of innocent Muslims spuriously shackled in the titular prison, is one of the best cinematic indictments of the Bush Administration’s extraordinary-rendition policies. The Muslims’ story is recounted, briefly, in The Shock Doctrine, along with a number of other bullet-point topics that have been explored more fully in other docs, from the horrible ramifications of the 1976 Argentinean coup to the private-contractor hell of Paul Bremer’s post-war Iraqi occupation.

The “newness” here isn’t in the isolated catastrophes themselves but in the connective tissue – the repeated use of the term “shock” in varied settings – that binds them across borders, language and culture. The Shock Doctrine falters most during its seemingly arbitrary cutaways to scenes from Klein’s book tour; as with feature filmmaking, the directors would have benefited from keeping the screenwriter out of the assembly process.

But its strongest asset remains its evenhanded presentation of its thesis. The Shock Doctrine isn’t nearly as researched or probing as The Corporation or Charles Ferguson’s documentaries (No End in Sight, Inside Job), but it borrows their understated grammar. There is never that sense of hyperventilated panic that made films like Countdown to Zero collapse under their own hysteria. The Shock Doctrine is offered more as an academic argument augmented by historical record. It seems to say: Consider this information, contest its merits if you wish and go forth. Viewers of opposing political and economic viewpoints will have much to debate when the credits roll. 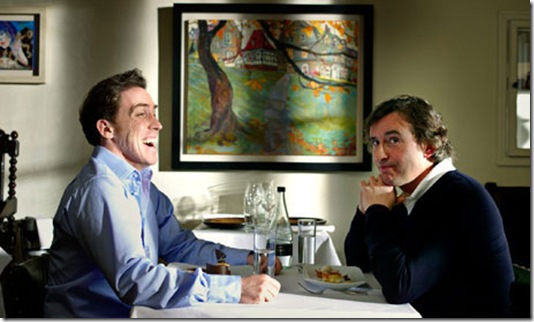 Oct. 11: From one Michael Winterbottom feature to another: This week saw the release of The Trip (IFC, $16.99), one of the best films of this past summer. Shortened from an apparent miniseries, the movie reunites British comic stalwarts and real-life buddies Steve Coogan and Rob Brydon – who shone brightly for Winterbottom in Tristram Shandy: A Cock and Bull Story – in a largely improvised road movie through bucolic U.K. countrysides. The Trip is recommended for the dueling celebrity impressions alone – wait till you hear both funnymen tackle Michael Caine, Hugh Grant, Woody Allen and others. But there’s pain beneath the puns; the film functions as a potent study of friendship while casting a critical eye on the semiautobiographical Coogan character.

Also on tap this week is the reigning champion of 2011, Terrence Malick’s staggering and stupefying The Tree of Life (Fox, $24.99 for Blu-ray/DVD combo pack). Sure to divide critics and audiences for decades, this is, so far, the most important film to see this year, whether you like it or not. This combo pack has just one special feature – a supplement called Exploring the Tree of Life – but I smell a fully loaded Criterion reissue in the not-too-distant future. I also recommend this year’s Sundance favorite Terri (Fox, $20.99 Blu-ray and $16.99), a brave dramedy about the relationship between an overweight high-school misfit and his strange vice principal (John C. Reilly) that, inexplicably, never even opened theatrically in South Florida.

On the retro front, check out the Blu-ray release of the omnibus film Boccaccio ’70 (Kino, $32.49), a quartet of lengthy shorts by Italian masters plumbing Boccaccio’s Decameron for inspiration. The films, directed by Mario Monicello, Federico Fellini, Luchino Visconti and Vittorio De Sica, are some of the directors’ most sexually provocative works, and the final product clocks in at an imposing 204 minutes. 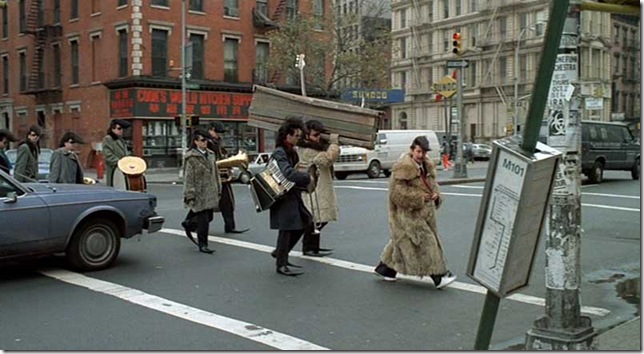 Oct. 18: The Fellini fun doesn’t stop there; this week. Raro Video issues the Blu-ray release of I Clowns ($20.99). Typical of late-period Fellini, the movie is a surrealist phantasmagoria, eschewing conventional narrative in favor of a strange, dreamy approach that gives way, stranger still, into a documentary-like aesthetic. Fellini called the final product a “docu-comedy.” And, as its title suggests, it’s all about clowns, a concept the should make some happy and many others frightened.

But my favorite pick up this week is the three-disc box set Aki Kaurismaki’s Leningrad Cowboys (Criterion, $40.49). In 1989, deadpan Finnish auteur Kaurismaki made the cult classic Leningrad Cowboys Go America, about a fictional, musically inept ragtag rock band’s tour of the United States, which included a hilarious cameo by Jim Jarmusch, a kindred spirit to Kaurismaki’s low-key style. For years, this has been one of my favorite movies not released on DVD, so I’m thrilled about this. The Criterion Eclipse release also includes the little-seen 1994 sequel Leningrad Cowboys Meet Moses and the concert movie Total Balalaika Show, from the same year, which documents the by-then real-life Leningrad Cowboys at an appearance in Helsinki.

Also of note this week are Baaria (Image, $18.99 Blu-ray and DVD), Guiseppe Tornatore’s epic, Amarcord-like journey through his (and Italy’s) complex past; the Blu-ray premiere of Martin Scorcese’s bloody reimagining of Cape Fear (Universal, $14.99), and Paul Mazurksy’s autobiographical movie satire Alex in Wonderland (Warner Archive, $26.99), which casts Donald Sutherland as a commercial filmmaker desperate to break into art-house cinema … a move that culminates in a meeting with Federico Fellini (yet another Fellini reference this month!). 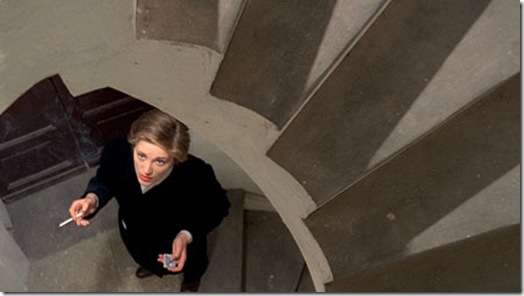 Oct. 25: This week, Criterion unveils Identification of a Woman ($20.99 Blu-ray, $16.99 DVD), a late-period Michelangelo Antonioni movie that has long deserved its due. It’s not considered one of his most transcendent pictures, but this seemingly autobiographical take on a blocked filmmaker’s sexual adventures with two enigmatic women is certainly one of the most compelling art-house provocations of the vanilla ‘80s, highlighted by a masterful, fog-drenched set piece. The disc includes a 1982 television interview with Antonioni and a new essay by critic John Powers.

Also, don’t miss Lu Chuan’s historical Chinese epic City of Life and Death, in luminous black-and-white CinemaScope, which is sure to be included in many critics’ top 10 lists at the end of this year. This release includes a feature-length documentary on the making of the movie. Elsewhere, Richard Linklater’s Gen-X masterpiece Dazed and Confused gets the Blu-ray treatment (Criterion, $27.99), along with 1974’s The Conversation (Lionsgate, $17.99), for my money the best movie Francis Ford Coppola has ever made. Also look out for The Countess (MPI, $22.49), the third directorial feature from French actress Julie Delpy, about the spiritual bloodlust of a 17th-century Hungarian countess, along with the Blu-ray debuts of two cult horror flicks from giallo director Lucio Fulci: Zombie and House by the Cemetery (Blue Underground, $22.49 and $15.99 respectively), just in time for Halloween. 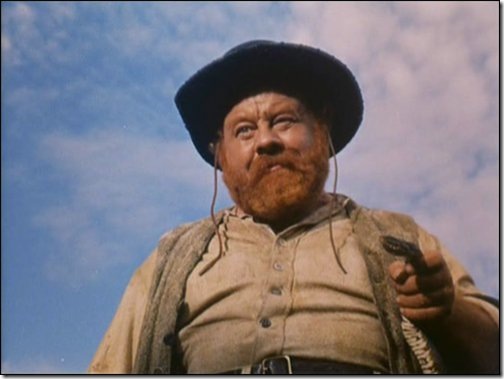 TCM Watch: Every Tuesday this month, TCM has been paying tribute to the great director Nicholas Ray on what would be his 100th birthday. This has meant, so far, a trove of rarely screened Ray features, including Born to Be Bad, Johnny Guitar and The Lusty Men. The fun continues Oct. 18 with 1958’s Wind Across the Everglades (11:30 p.m.), an unforgettable and flat-out bizarre Florida-shot adventure; and Hot Blood (3:15 a.m.), a 1956 musical with Jane Russell and Cornel Wilde.

On Oct. 25, experience the rarest Ray product of all: We Can’t Go Home Again (11 p.m.). Shot just a few years before the director’s death, this is an experimental movie filmed with his students at SUNY Binghamton that even IMDB knows nothing about. The Ray retrospective concludes at 12:45 a.m. with Don’t Expect Too Much, a brand-new documentary on Ray’s life and career that includes contributions from Victor Erice and Jim Jarmusch.

On Nov. 1, kick off the month with a couple of unreleased favorites, collected under the theme of “Writer/director/star.” The night includes Jour de Fete (3 a.m.), the first feature from French comedy titan Jacques Tati, a movie unavailable on DVD in America; and Jerry Lewis’ Three On a Couch (4:30 a.m.), a comedy about psychiatry that, to my knowledge, has not been released on any format, anywhere.

Film: Playwright August Wilson began his chronicle of the African-American experience throughout the … END_OF_DOCUMENT_TOKEN_TO_BE_REPLACED

Film: Just in time with the opening of movie theaters in Palm Beach County comes the season’s most … END_OF_DOCUMENT_TOKEN_TO_BE_REPLACED

Music: The very last concert Franz Joseph Haydn attended in his life was in March 1808, about a year … END_OF_DOCUMENT_TOKEN_TO_BE_REPLACED