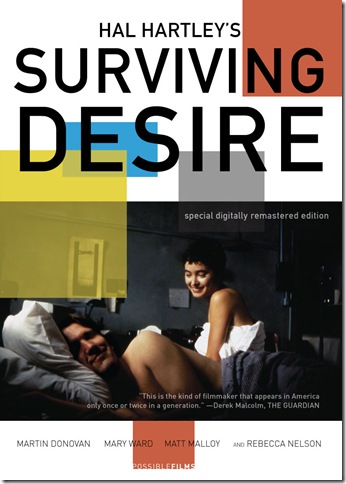 It’s not hyperbole to suggest that my cinephilia in general and my specific interest in writing about films are the result of one director’s work: Hal Hartley.

Known for his insightful, quirky movies about hyper-literate drifters and outcasts who converge on Long Island, Hartley was one of the earliest mavericks of the contemporary American independent cinema, alongside Jim Jarmusch, Richard Linklater and Spike Lee. My introduction to Hartley in my formative college years was the kind of career-altering epiphany that only happens a handful of times in somebody’s life.

Through Hartley, I discovered Wim Wenders (and through Wenders, Rainer Werner Fassbinder; and through Fassbinder, Douglas Sirk); Jean-Luc Godard (and through Godard, the French New Wave, Nicholas Ray and Samuel Fuller); and Robert Bresson (and through Bresson, Carl Theodor Dreyer). The rest is film history.

Hartley was a prolific writer-director throughout the 1990s, and he developed a cult following among indie rockers, arthouse attendees and nu-bohemians. A true auteur, his films are as instantly identifiable as anything by Hitchcock, Godard or Cassavetes, and like most uncompromising artists, his work tended to polarize. After the commercial and critical failure of his revisionist Beauty and the Beast parable No Such Thing in 2001, his films became increasingly difficult to fund and distribute. He’s released just two features since, moving to Berlin in 2005 partly because his work was better appreciated in Europe.

Undaunted, Hartley is back on DVD shelves – and, briefly, back on our shores – for a mini-revival of his films past and present. At the IFC Film Center in New York recently, he introduced screenings of his 1991 feature Surviving Desire as well as a program of his five most recent shorts, all of which have just been issued on DVD from Microcinema.

Looking at Surviving Desire once again – I’ve been the proud owner of the out-of-print Wellspring release for years – is like reentering an former home I hadn’t visited in years. Made for public television, Hartley’s hourlong experiment is, on the surface, a movie about an intellectually constipated professor (Martin Donovan, Hartley’s earliest onscreen surrogate) who falls in love with a flighty student (Mary Ward) who’s only interested in seducing him for literary material.

But nobody watches Hartley movies for the plots. Surviving Desire is really a profound meditation on love, attraction, faith, inspiration and whatever other theoretical concepts float around the director’s dialectical miasma of a script. Brilliant lines and clashing non-sequiturs zing by like a machine gun’s rat-a-tat, the highbrow and lowbrow coexisting harmoniously.

Characters read philosophy books on camera, try to comprehend Dostoevsky, engage in impromptu dance choreography, accidently marry vagrants on the street and walk past public rock ‘n’ roll serenades. Weird off-screen sound cues and deliberately constrictive visuals further set this classic apart, a great introduction to early Hartley that, hopefully, will make newbies want to look at his other masterpieces from the period, The Unbelievable Truth (1989) and Trust (1990).

The image quality of Microcinema’s Surviving Desire disc is supposedly digitally remastered with color correction supervised by Hartley, but the difference from the original release is negligible. The only supplemental addition is the 11-minute featurette Upon Reflection: Surviving Desire, a funny and entertaining look at the movie’s production and the director’s overriding themes. 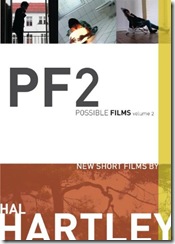 The second Hartley release of the month, Possible Films: Volume 2, collects five movies, ranging from 3 to 28 minutes long, which the filmmaker shot in and around his Berlin apartment in 2008 and 2009. There’s nothing here quite as ambitious or socially conscious as his most recent features – the cool sci-fi dystopia The Girl From Monday (2005) and the spy-movie deconstruction Fay Grim (2006). But these shorts prove that Hartley has been far from inactive in Berlin; he’s still creating art, if on a smaller scale than before.

Like Fay Grim, nearly every shot in this collection is a canted, or slanted, angle, calling attention to the formalism and suggesting that something is perpetually askew. The shorts all deal in some capacity with modern media, the artistic process and communication, and all are cut from the same fold of cloth. In an interview on his website, www.possiblefilms.com, Hartley referred to the shorts, collectively, as a suite.

The shorts consist of A/Muse, which follows an aspiring actress as she campaigns to become Hartley’s next onscreen muse; Implied Harmonies, a documentary about Hartley’s involvement filming the video portion of composer Louis Andriessen’s epic multimedia opera La Commedia; The Apologies, about a playwright working on a musical version of The Odyssey who lends his apartment to an ex-girlfriend for an afternoon; Adventure, which finds Hartley and wife Miho Nikaido candidly analyzing their marriage while traveling to Tokyo, New York, Istanbul and Berlin; and Accomplice, a spy thriller in miniature about a woman asked to pirate a rare videotape.

If there’s something not completely satisfying about these shorts, it’s their inherent brevity. Hartley is too talented a mind to stop mass-producing movies for theatrical distribution. A little reflective solitude away from the noxious movie industry is a great thing; more artists should do it to refuel their imaginations. But Hartley has been away from the game long enough. Word has it he’s working on an omnibus film called Moving the Arts, along with directors such as Jia Zhang-Ke and Atom Egoyan. Here’s hoping it leads to the kind of exposure Hartley earned in his ‘90s heyday. 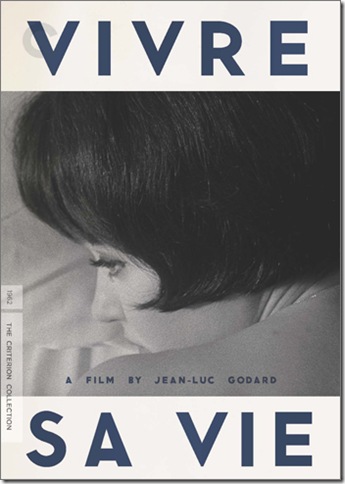 The country’s greatest DVD distributor finally releases one of the greatest films of the French New Wave, and it’s a vast improvement over the previous edition by Fox Lorber.

The most memorable collaboration – or cinematic dance, if you will — between director Jean-Luc Godard and star/wife Anna Karina, My Life to Live is an account of a girl’s descent into prostitution, balancing dispassionate, documentary detail with groundbreaking theatrical formalism. Equal parts boundary-pushing cinematic experiment and powerful social critique, Vivre Sa Vie is the kind of film people write theses about and still manage to run out of space. It’s an epochal work of art and an endless wellspring of depth that still astonishes no matter how many times you see it.

Australian film writer Adrian Martin offers a passionate, invigorating commentary track, and the bonus features are delectable. These include a 40-page booklet, excerpts from a 1961 French television broadcast about prostitution, a 45-minute 2004 interview with French film scholar Jean Narboni and, best of all, a 1962 TV segment on Karina in which the interviewer asks her some very weird and visibly uncomfortable questions – such as “Do you think you’re ugly?” 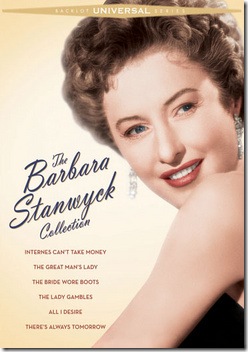 This six-disc collection goes a long way to display the versatility of one of our greatest actresses ever (by the American Film Institute’s estimate, she was No. 11), spotlighting movies that never turn up in most Stanwyck “Best of” lists. What a joy to finally have on DVD films such as 1937’s Internes Can’t Take Money, which marked the first appearance of Dr. Kildare (played here by Joel McCrea); 1942’s The Great Man’s Lady, which starred Stanwyck as the 100-year-old (!) widow of a legendary leader; and 1949’s The Lady Gambles, one of the earliest Hollywood pictures to deal with gambling addiction.

The two brightest gems in this set are the pair of mid-career Douglas Sirk melodramas that many have waited years to arrive on DVD: All I Desire (1953), which finds Stanwyck, as an aging actress, returning home to the family she abandoned 10 years prior, and There’s Always Tomorrow (1956), about an affair between a married toy manufacturer (Fred MacMurray) and Stanwyck’s lonely fashion designer. 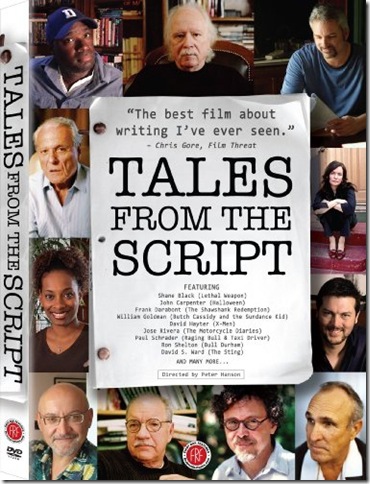 Tales From the Script

Subjects range from a general lack of respect for the profession to studio executives hacking apart their work, to the perpetual struggle to meeting actor’s and director’s needs to the scourge of the focus group and working in a “post-content era,” where an overreliance on franchise films and familiar generic tropes discourages new ideas. Screenwriters compare their work to everything from dance to war to heavy gambling over the course of 105 minutes, but the most memorable interviews are the personal stories of triumph and dejection, whether it’s Bucket List writer Justin Zackham sharing his sweet success story or BloodRayne scribe Guinevere Turner discussing the complete butchering of her script by notorious hack director Uwe Boll.

Film: Playwright August Wilson began his chronicle of the African-American experience throughout the … END_OF_DOCUMENT_TOKEN_TO_BE_REPLACED

Film: Just in time with the opening of movie theaters in Palm Beach County comes the season’s most … END_OF_DOCUMENT_TOKEN_TO_BE_REPLACED

Music: The very last concert Franz Joseph Haydn attended in his life was in March 1808, about a year … END_OF_DOCUMENT_TOKEN_TO_BE_REPLACED