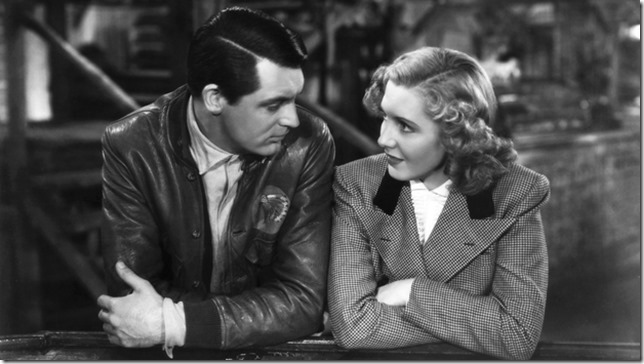 Cary Grant and Jean Arthur in Only Angels Have Wings (1939).

Only Angels Have Wings: Howard Hawks’ 1939 masterpiece (Criterion, $26.19 Blu-ray, $19.69 DVD) is set in an exoticized South American airfield, where Cary Grant’s emotionally crippled American expat runs a commercial aviation business. He’s accustomed to sending pilots off into treacherous conditions and, often, watching them return in pieces. It’s left him numb to grief, with a hardened heart and a phobia of domesticity. He is, as his longtime bestie “Kid” (Thomas Mitchell) tells Jean Arthur’s potential paramour, “He’s a good guy for gals to stay away from.”

Only Angels Have Wings, with its harrowing aerial effects and its tense balance of chatter and silence down below, offers another empathetic example of a Hawksian masculine compound under siege from life’s inevitable changes. The airfield is a temporary waystation of lost souls nose-diving toward their elegiac end. Over a week of screen time, “Kid” is forced into retirement because of weakening vision; bones break in at least two pilots, grounding them; an aviator with a cowardly reputation played by Richard Barthelmess returns in shadowy attire, looking for any kind of redemptive work he can get. Grant, in high-hitched pants, a leather bomber jacket and a wide-brimmed sombrero that is practically its own architectural element, attempts to keep order amid the chaos, as narrative dominoes fall in Shakespearean formation.

I’ve seen Only Angels Have Wings at least three times, and I could easily watch it again tomorrow and revel in its unorthodox combination of thrilling adventure film, sobering drama and raucous screwball comedy: It’s a Hawks greatest-hits collection, all in one film, and its striking convergence of rapidly conveyed crises predates Aaron Sorkin’s sophisticated bustle by more than 50 years.

Criterion’s reissue understands all of this, buttressing this classic with insightful extras. Film scholar David Thomson’s affectionate tribute marvelously breaks the film down into its constituent parts, summarizing the appeal of Hawks’ movies by noting their locations as places where “it might be fun to be — that is the general feeling of a Hawks film.” In an insider-y audio Q&A with Peter Bogdanovich from 1972, Hawks discusses his technical choices, in language far simpler than his erudite interviewer, i.e. “It’s more interesting to light one side and not the other side.” And in the fascinating featurette Howard Hawks and his Aviation Movies, film scholars Craig Barron and Ben Burtt discuss the realistic attention to detail that Hawks, a former World War I pilot, brought to his staging of the flight scenes and airplane crashes in Only Angels, Ceiling Zero and The Dawn Patrol. 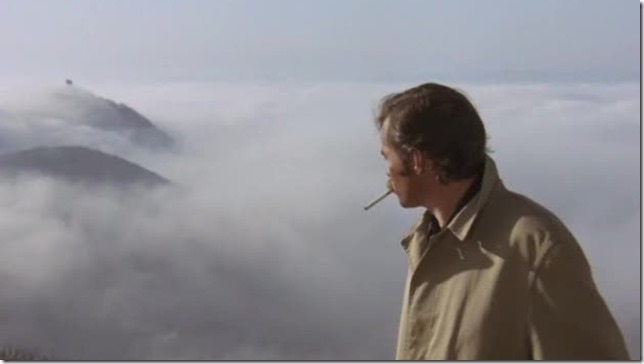 Dead Pigeon on Beethoven Street: Let’s first acknowledge that Dead Pigeon on Beethoven Street (Olive, $13.99 Blu-ray, $11.99 DVD) is the best title imaginable for a winking detective movie. But perfect titles don’t necessarily make splendid films. Shot in West Germany, with a German crew, for a German television show, Samuel Fuller’s 1974 curiosity tracks rumpled private investigator Sandy (Glenn Corbett) through a mostly drab and depopulated Deutschland in search of his partner’s killer. His investigation leads to an international blackmail ring and a seductive femme fatale who drugs dignitaries and poses them in sundry pictures. Sandy covertly joins her operation, planning to double-cross the double-crossers.

In The American Cinema, Andrew Sarris filed Fuller under “the Far Side of Paradise.” Dead Pigeon on Beethoven Street, restored in 2015 to its 127-minute director’s cut, is the really far side, perhaps the Fuller film in which he had most absorbed the techniques of the French New Wave rebels who admired him, from the Godardian use of onscreen text, inserted stills and intertextual movie references (the brief clip of a German-dubbed Rio Bravo is a delight) to the punctuated zooms of Jean-Pierre Melville.

And the movie bookends really well, starting with a hospital melee in which a suspect, dressed as a police officer, pushes a paraplegic down a stairwell with typical Fuller brutalism. The anarchic climax is set in the effete blackmailer’s study, which is full of decorative weapons that wind up in walls and in people, and which leads to a bravura finish of betrayals and surprises.

It’s the 100 minutes in the middle that can be hard to swallow — the tedious routine of Sandy’s methodical immersion into the extortion ring, the lumbering exchanges of leaden dialogue, the diversions within the diversions. Fuller lingers on uninteresting shots the way a stoned person lingers on his own hand; if you’re not high with him, you may start to wonder what you’re looking at. Resembling Jim Jarmusch’s weaker esoterica, Dead Pigeon plods where it should thrill, an unfocused dirge for a director who knew better than most how to cut to a chase. At least you’ve always got Can, the celebrated Krautrock band, whose cool and feverish score raises the stakes during scenes that could use all the help they could get. 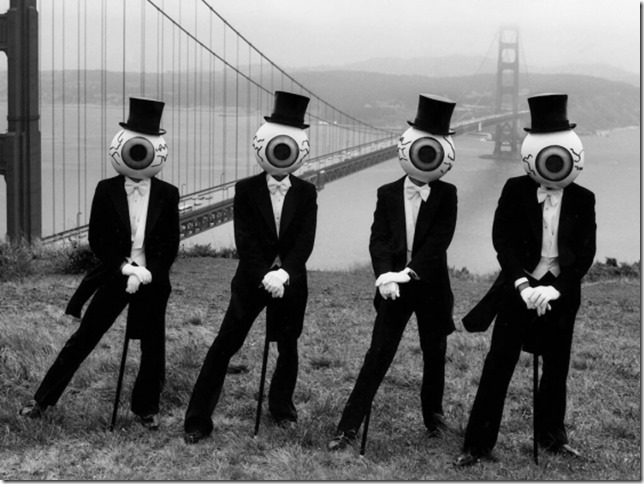 Theory of Obscurity: The unclassifiable performance-art collective known as The Residents are the subject of this affectionate biography (Film Movement, $24.99 Blu-ray, $14.49 DVD), which plumbs the three-piece outfit without revealing the mystery of the group’s tailored 45-year anonymity. Bolstered by interviews from celebrity collaborators and fans like Penn Jillette, Matt Groening and Primus, along with Residents “representatives” Homer Flynn, John Kennedy and Jay Clem, Theory of Obscurity traces the experimental troupe’s unlikely conception in Shreveport through its cult success, its star-crossed tours, its cryptic iconography, its early adoption of new media and its 2014 world tour, whose performances suggest the most demented Christmas concert you’ve ever seen.

Directed by Don Hardy, the film is perhaps too straightforward in structure and style for a band as uncompromisingly weird as The Residents, and it could have at least addressed the rumors that its management team is in fact composed of the musicians themselves. To its credit, this entertaining love letter ultimately poses existential, abstract questions about identity and collectivism vs. egotism. Its most memorable passages, aside from the music, consist of the unusual plaudits of Residents devotees.

The band is compared to everything from wrestlers to superheroes to ancient humans; one admirer notes that “You don’t listen to the Residents if you want to do the dishes;” and Primus says his first reaction to the Residents is that it’s “the music they’re probably playing in Hell.” Jillette puts it simply and aptly: The Residents represent “the U.S. at its best.” 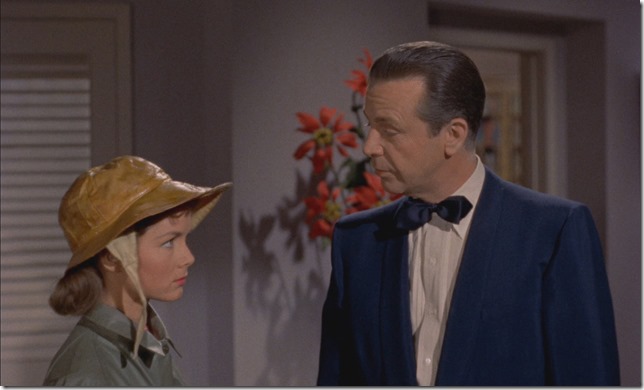 Susan Slept Here: Frank Tashlin’s best work was still ahead of him when he directed 1954’s Susan Slept Here (Warner, $17.99 Blu-ray, $17.02 DVD), a marriage-of-convenience comedy so predictable you could watch it muted and follow every development, no matter how ludicrous.

Dick Powell, engaged to Anne Francis’ film actress, plays Mark Christopher, a screenwriter of trifling escapism and former Oscar glory who fancies himself, a la Joel McRea in Sullivan’s Travels, as an earnest tragedian. Stuck in a creative rut, he is soon provided a hook for his next script: a juvenile delinquent named Susan (Debbie Reynolds), picked up by the local constabulary after she breaks a beer bottle over the head of a sailor. Pitying the reckless 17-year-old, the police officers drop her at Mark’s bachelor pad on Christmas Eve for inspiration for a script about underage crime — and to offer the girl a holiday reprieve before booking her.

The risqué nature of the love interests’ prompt bonding is toned down, in part because Tashlin, for all his formal inventiveness, was no moral subversive: He’s as innocent as a Sunday school teacher, even when Susan ropes the older man under the mistletoe for a chaste smooch. Besides, Reynolds is as much “17” as Powell’s character is “35:” These are just two adults falling in love, full stop. The film’s merits derive from its quick-witted Hollywood in-jokes — Mark’s Oscar statuette narrates the movie, and at one point Susan uses it as a nutcracker — and from a delightful dream sequence that references An American in Paris and borders on Dadaism, betraying Tashlin’s animation background. The palette is ʼ50s-Technicolor bright, and it looks great on Blu-ray.

Meet the Hitlers: Matt Ogens’ 2014 documentary (Virgil Films, $13.99 DVD) follows around a few people who, for whatever reason, bear the Christian or surname Hitler. Most carriers of the most notorious last name in world history would have legally changed it, but these individuals wear their monikers as acts of almost heroic defiance, despite the looks of incomprehension and revulsion they receive every time they display an ID.

These include a widowed weapons enthusiast in Salt Lake City, a teenager in suburban St. Louis, an Ecuadorean immigrant laboring in Connecticut and a German mariner with an Islamic head tattoo. Ogens also spends time with a hipster artist in Portland who repurposes Hitler memorabilia into subversive photography; the journalist David Gardner, who attempts to track down the last living descendants of Adolf Hitler, now living in seclusion in upstate New York; and the famous case of Heath Campbell, the New Jersey Neo-Nazi who named his son Adolf Hitler Campbell.

That Ogens manages to humanize this derelict degenerate is an accomplishment and a half.

Certainly, the Campbell portions of Meet the Hitlers, and the questions they raise over freedom of speech and child safety, are the meatiest segments of Ogens’ film. The movie missteps only in its lack of context (i.e. there are no figures on how many Hitlers have existed, and then changed their names, since the rise of Nazism) and the inordinate screen time granted to Gardner, whose quest never really goes anywhere. The rest of the Hitlers offer a diverse cross-section of the contemporary populace, each of them eventually confronting the baggage of their name and the issues of ancestry, identity or isolation it has wrought. Absurdly funny at times, Meet the Hitlers is ultimately more substantial, and tragic, than it initially seems.

Film: Playwright August Wilson began his chronicle of the African-American experience throughout the … END_OF_DOCUMENT_TOKEN_TO_BE_REPLACED

Film: Just in time with the opening of movie theaters in Palm Beach County comes the season’s most … END_OF_DOCUMENT_TOKEN_TO_BE_REPLACED

Music: The very last concert Franz Joseph Haydn attended in his life was in March 1808, about a year … END_OF_DOCUMENT_TOKEN_TO_BE_REPLACED