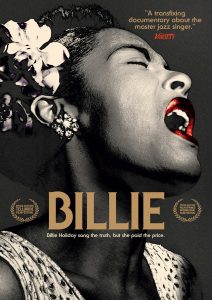 Two documentaries about the Golden Age of jazz, new on video from Kino Lorber and its affiliates, spotlight both the agonies and ecstasies of the lives of its performers. Both are essential, but if you’re going to make a double feature out of them, it’s best to get the tough one out of the way first.

James Erskine’s arresting Billie ($13.99 DVD) charts the tragic life of Billie Holiday through the prism of one of Lady Day’s most important biographers. In the 1970s, freelance journalist Linda Kuehl spent seven years interviewing nearly 200 of Holiday’s friends, family, colleagues and contemporaries, only to die under mysterious circumstances before her book could be completed. But her rich trove of audio interviews provides innumerable insights into her tortured subject and the social and cultural mores of the Jim Crow era — and her voice becomes the skeleton for Erskine to supplement her work with archival film clips and images.

The result is a portrait of the greatest jazz singer that is beyond “warts and all.” We learn that Holiday turned tricks as a young woman, cussed like a sailor and became hooked first on marijuana and then, at the behest of the cruel men in her life, harder substances. She suffered the constant indignities of life on the chitlin’ circuit, a period of whitewashing, subjugation and exclusion, as white artists stole and polished the acts of Black entertainers. Harassed by federal law enforcement eager to make an example out of an African-American celebrity, she was actually imprisoned for a year for possession of marijuana, a reality unthinkable for the melanin-lacking performers of her, or any, time. She died at 44 with $750 to her name.

Unabashedly libidinous, and with a poor track record for choosing partners, Holiday is painfully judged by the men — and they’re pretty much all men — who speak into Kuehl’s recorder. I winced at the number of times Holiday, long dead and unable to defend herself, is put on the couch by Kuehl’s interviewees. She was “really a psychopath;” “she loved the punishment” doled out by her abusive boyfriends; “she was only happy when she was unhappy.”

The viewer of Billie yearns for the book that never was. Kuehl’s untimely demise, ruled a suicide outside a Washington, D.C., hotel following a concert by Count Basie, with whom Kuehl reportedly was romantically linked, reminded me of Michelle McNamara, the crime writer whose life was cut short before the completion of her magnum opus I’ll Be Gone in the Dark. Erskine essentially chases one ghost who was chasing another, deftly entwining biographer and subject.

Tellingly, though, what I’ll take most from Billie is an extended, single-camera close-up of Lady Day performing “Strange Fruit,” arguably the most important song of the 1930s. It is harrowing, heart-stopping and as vital a three minutes as ever put to record; it is Holiday’s legacy crystallized.

Which brings us to happier territory, and Bert Stern’s concert film Jazz on a Summer’s Day ($19.89 Blu-ray, $13.99 DVD), an exuberant celebration of the performance of this indelible art form. Filmed at the 1958 Newport Jazz Festival, it’s a flawless introduction to the greats of the time. We get to hear Jimmy Giuffre wailing on the clarinet, Thelonious Monk performing “Blue Monk” and a gloriously scatting Anita O’Day.

Chuck Berry delivers a roiling “Sweet Little Sixteen,” and Dinah Washington’s “All of Me” approaches the sublime. Mahalia Jackson’s midnight headline is literally a religious experience. Stern’s camera is often so close to the performers you can see the beads of sweat dripping from their noses.

But Stern, a renowned fashion photographer who shot the film verité-style and on the cheap, was more than a chronicler of a historic festival. He worked with editor Aram Avakian to forge new ground in the syntax of the concert doc, associatively cutting to and away from the music, but always in harmony with it — whether it’s abstract visions of rippling water in Newport’s nearby marina or riveting aerial photography of the America’s Cup yacht races happening just offshore. Stern is also an astute people-watcher, capturing audiences immersed in the music and oblivious to the camera.

Newport in 1958 comes across as a fairly wholesome idyll, and the effect of Stern’s and Avakian’s vision is that, for one weekend anyway, jazz was not just a genre performed onstage; it was embedded into the fabric of the city. It’s easy to get swept up in the electricity of it all, yearning, as all music lovers are in concert-starved 2021, for the return of this glorious, if temporary, symbiosis.

Film: Playwright August Wilson began his chronicle of the African-American experience throughout the … END_OF_DOCUMENT_TOKEN_TO_BE_REPLACED

Film: Just in time with the opening of movie theaters in Palm Beach County comes the season’s most … END_OF_DOCUMENT_TOKEN_TO_BE_REPLACED

Music: The very last concert Franz Joseph Haydn attended in his life was in March 1808, about a year … END_OF_DOCUMENT_TOKEN_TO_BE_REPLACED