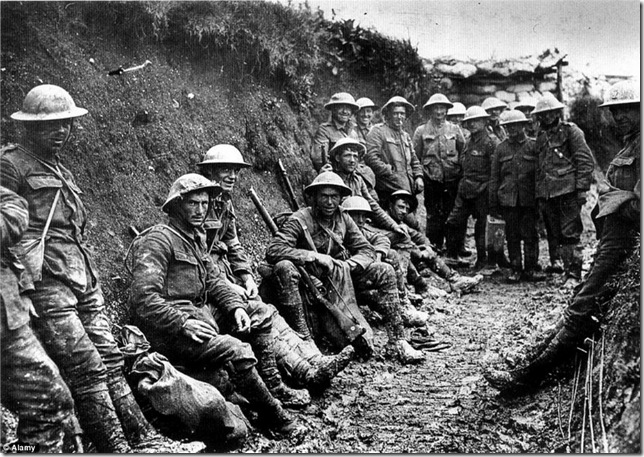 French soldiers in the trenches during World War I.

Imagine a world in which Great Britain and Germany are the major powers, and the United States and Russia are only minor players on the global scene.

It’s a world of relatively conservative politics, where there was no World War II, no Holocaust, and no one but their families had ever heard of Adolf Hitler or Vladimir Ulyanov (Lenin). That we don’t live in such a world is the direct result of a war that was in the middle of its four-year upheaval 100 years ago, and that remade the globe so thoroughly that we have yet to come to terms with it.

Take, for example, the current chaos in Syria.

“There were many ways in which the First World War settled nothing,” said Jay Winter, one of the world’s leading experts on the conflict, recently retired from 15 years of teaching at Yale. “It didn’t resolve the great problems that existed before, and it created new ones. It reshuffled the explosive material that was deposited, especially in the Middle East but not only in the Middle East, to make it inevitable that there would be further conflicts.

“The way the Middle East was carved up was in classic colonial fashion, so that the European powers could create failed states they could control,” Winter said. “And that’s what [Russian leader Vladimir] Putin’s doing right now. He’s put his foot in, saying, ‘You can’t make peace without me.’ Well, guess what? That’s what happened in the First World War: They made peace without Russia, because Russia was in the middle of the Bolshevik Revolution. It’s exactly the same.

“And the whole range of other parallels, the places near Aleppo that are now scenes of unbelievable suffering, are the same places where refugee camps for the Armenian genocide were placed,” he said. “It’s not even displaced; it’s in exactly the same spot where millions of people fleeing brutality of all kinds sought some kind of safe haven.”

World War I, in other words, is as relevant today as it ever was.

Winter will discuss the legacy of the First World War for our current, already bloody century Saturday afternoon at the Festival of the Arts Boca as part of its letters events.

This year marks Winter’s 50th year of studying the Great War. He recently finished editing The Cambridge History of The First World War, published in 2014 by the Cambridge University Press in three huge volumes. A total of 72 people worked on the project: “It was like being in charge of a very large orchestra,” he said. 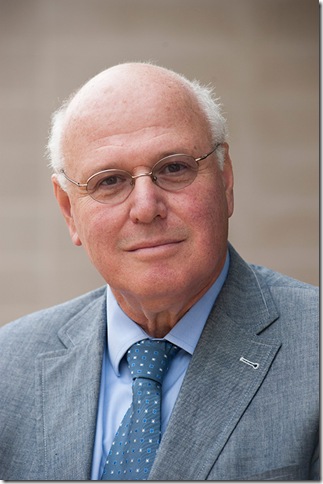 A native of New York City, Winter, 70, holds degrees from Columbia and Cambridge, has written 14 books and edited a further 16, primarily about World War I, and won an Emmy and a Peabody in 1997 for his work as co-writer of the excellent PBS series The Great War and the Shaping of the 20th Century. He also has taught at the Hebrew University of Jerusalem and the University of Warwick in England, as well as at his alma maters of Columbia and Cambridge.

Currently a resident of Paris, he and his wife live not far from the scene of the November 2015 attacks by Islamic State-allied terrorists that killed 130 people and injured nearly 400 more.

“Everything is jittery. The tourism industry has taken a real plunge. There’s a bitterness about the lack of assimilation of young Muslims,” he said. “Everyone believes it’s going to happen again. It’s just when and where.”

And the current migrant wave from Syria has added another difficult factor.

“What has happened in France that makes this dangerous is that this set of killings has fused with the fear of refugees from the Middle East,” he said. “There is a fear that the refugee flow contains within it future bombers, and that turns the politics of refugee treatment to the right, and makes it much harder for people to establish credentials as asylum-seekers.”

This, too, is in its way a legacy of the war, specifically the end of the Ottoman Empire and its replacement by a modern Turkey at the hands of Kemal Ataturk, who changed the country’s mode of dress to Western styles and reformed the alphabet and language.

“But he also eliminated the caliphate, the notion that the head of the Ottoman Empire is the head of Islam, or at least Sunni Islam,” Winter said. “When he eliminated that … this caused a crisis in Islam: Who has the last word? And the group of people who were very worried about the imperial takeover of the Middle East … worried about that as a threat to Islam, because the puppets that ruled these states didn’t do anything to counter them.

“They met in Cairo in 1926, and created what we now know as the Muslim Brotherhood,” he said. “The Muslim Brotherhood is the granddaddy of al-Qaida. It comes directly out of the crisis in Islam … it could explain something about ISIS, and indeed the dozens of little ISISes that are all around. They emerged from an Islamic world turned totally upside down by the First World War. And nobody’s found a solution.”

Winter said that angle from which to view World War I is part and parcel of the Cambridge history, which takes a transnational, global view of the war, which formally began in August 1914 with the German Empire’s invasion of Belgium. After three unimaginably sanguinary years in a stalemate on the trenches of the Western Front, the United States entered the war in April 1917, helping with its continual replenishment of fresh manpower to hasten the war to its conclusion in November 1918.

“The United States didn’t suffer the way the other combatants did. The United States took a bloody nose; it wasn’t a wound that lasts for generations,” he said. And while 53,000 is not a small number, those soldiers died in a relatively brief period of about six months, and while those months were brutal and awful, they were over quickly, he said.

“The First World War isn’t built into U.S. family histories the way it is in Europe,” he said.

When Winter first began studying the war 50 years ago, it was generally seen as a Western European conflict, with fighting in Eastern Europe mentioned in passing as a prelude to the Russian Revolution. But today’s globalized technological culture has helped shed light on the fact that it was a much wider event.

“What the First World War did was to remind us, and now we have the eyes to see, that this is a global world,” he said. “All the other conflicts which are central to our understanding of the war were completely occluded. But now we can see that a global world of violence was created in 1914, and we’re still in it.” 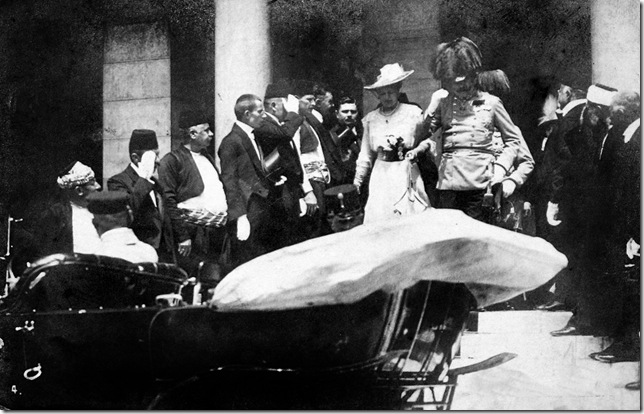 The war, which began as a punitive reprisal against Serbia for the assassination in June 1914 at Sarajevo in Bosnia of the Archduke Franz Ferdinand, heir to the throne of the Austro-Hungarian Empire, soon spiraled out of the control of its instigators. The countries involved had confidently believed the war would be of short duration.

“You men will be home before the leaves fall from the trees,” Kaiser Wilhelm II is reported to have told a group of young, eager German troops in August 1914.

“The people who launched the war were too stupid or morally blind to realize the consequences of what they were doing. They were ordinary politicians, but the word ‘ordinary’ is the operative one there,” Winter said. “And what they did was unleash extraordinary violence without the capacity of controlling it. They couldn’t turn it off … Once it got going, it went on and on and on, to an extent that the world had never seen before.”

But some of the directors of the war realized very quickly that the fight had escaped their control.

“My guess is that the German high command knew very early on that they were on a losing track,” he said. “And only their great military traditions, leadership, command structure and discipline kept them in the war for four years.”

The war was also lengthened by a spate of new technologies that made the wars of the 19th century seem like quaint scuffles by comparison.

“The second industrial revolution of metallurgy, light engineering and chemistry … produced the biggest arsenal of explosive shells, which of course by 1918 became shells loaded with chemical weapons,” he said. “All combatant countries, including the United States, used chemical weapons in the war.”

The war at heart was less the end of a long period of Enlightenment thinking that was extinguished in a moment of madness than it was another example of imperial war-making, Winter said.

“It was not an Enlightenment world, it was an imperial world. And imperial powers behave with major, unlimited brutality when they feel it’s the right thing to do, like Putin in Syria,” he said. “But the important thing is that what had changed was the technology of killing. And that gave tools to these major combatant states that radically transformed the institutions of war.”

Before the war, imperial powers had visited brutality on subject non-white populations. But as the war progressed, and massive amounts of killing technology were brought to bear on the powers themselves, war itself degenerated, he said. 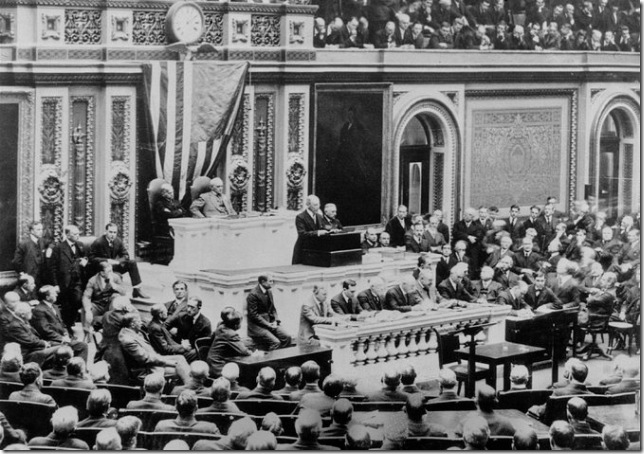 There were, and are, major lessons to draw from the war, Winter says, one of them coming out of the American entrance into the fighting.

“The world must be made safe for democracy. Its peace must be planted upon the tested foundations of political liberty,” President Woodrow Wilson told Congress on April 2, 1917, as he asked lawmakers to declare war on Germany. “We desire no conquest, no dominion. We seek no indemnities for ourselves, no material compensation for the sacrifices we shall freely make. We are but one of the champions of the rights of mankind.”

But that proved to be unrealistic.

“You never establish democracy through war. That was Woodrow Wilson’s idea: the First World War is a war to make democracy happen. But you don’t do it through war. It never works,” Winter said. “The only way it works is if you totally level a country, like Japan. But war in the sense of defeating an army and coming to a peace conference is never the way to establish democracy.

“The Wilsonian legacy of going to war for democracy was clearly the basis of George W. Bush’s strategy in Iraq. It’s an attempt to say that military power is the only way to get rid of these thugs like Saddam Hussein,” he said. “And they did that. But they didn’t install democracy.”

Another key lesson of World War I is that war is “never limited to soldiers.”

“It’s about damaging civilians. And the people who run foreign policy — you don’t have to be Donald Trump to talk about using overwhelming force to project American power — must own up and be honest about it … that war means killing civilians,” Winter said. “It means centrally killing civilians, not accidentally. The more these military operations proliferate, the more civilians are going to get killed.

“It’s knowing that war is something probably uncontrollable, and secondly that it isn’t guided by the Geneva Conventions or any other limitations. It’s about the facts on the ground and the force of the opposition, not about any legal controls or moral controls,” he said.

Film: Playwright August Wilson began his chronicle of the African-American experience throughout the … END_OF_DOCUMENT_TOKEN_TO_BE_REPLACED

Film: Just in time with the opening of movie theaters in Palm Beach County comes the season’s most … END_OF_DOCUMENT_TOKEN_TO_BE_REPLACED

Music: The very last concert Franz Joseph Haydn attended in his life was in March 1808, about a year … END_OF_DOCUMENT_TOKEN_TO_BE_REPLACED