Several theater companies went out of business in 2015, while others moved to more comfortable digs, hoping their audiences would follow. Of those that stayed put, many pushed themselves by producing challenging works, particularly mega-musicals and powerful new dramas.

There was too much quality happening to contain the year in 10 productions, so here instead (in my subjective opinion, in descending order) are the 12 best of 2015:

1. Les Misérables, Maltz Jupiter Theatre — After countless local engagements of the touring version, this epic musical of Victor Hugo’s French history lesson got a new look and a vocally powerful cast that rendered the complex tale with exceptional clarity. Mark Martino demonstrated why he is the Maltz’s go-to director for major challenges, with great scenic design work from Paul Tate DePoo III.

2. Daniel’s Husband, City Island Stage — First developed at Jan McArt’s Lynn University reading series, then produced at the gay-themed company’s Fort Lauderdale stage and then revived in December at the Levis JCC, South Florida playwright Michael McKeever went topical with a tale that hinged on the evolving status of marriage equality. Recognizing that not every gay person wants the conventionality of marriage, he spun a worst-case-scenario of a gay couple that balks at being wed, then suffers the consequences after a devastating medical setback.

3. Hello, Dolly!, The Wick Theatre — Fresh from his cross-dressing triumph in La Cage aux Folles, Lee Roy Reams directed and starred — as Dolly Levi — in a groundbreaking production of the Jerry Herman musical about a meddling matchmaker who focuses on herself as her client. Reams was the reason to see the otherwise traditional production, though Lewis J. Stadlen was also a standout as her quarry, a curmudgeonly Yonkers merchant.

4. Sex with Strangers, The Arts Garage — A new creative team of artistic director Keith Garsson and resident director Genie Croft debuted and hit the ground running with this intriguing two-hander about a pair of novelists, one old-school and the other new media, who are wary of each other yet quickly end up in bed together. So popular was it that it transferred for an extended run in Manalapan, helped undoubtedly by the attention-getting title.

5. Billy Elliot, Maltz Jupiter — The bigger the challenge, the more this Jupiter company excels, it seems, as it offered an astonishingly accomplished production of the Elton John-Lee Hall musical of the pre-teen from Northern England who discovers and pursues a love for ballet. The Maltz found a pair of young ringers to rotate in the title role and SFX Inc. to fly them. The results simply soared.

6. Pippin, Kravis Center — Of all the reconceived musicals, this Tony-laden revival stands out for placing the anachronistic story of King Charlemagne’s restless son inside a circus tent amid narrative-furthering variety acts. The Stephen Schwartz score still sounds great and the production featured — for the first time anywhere — Adrienne Barbeau as Pippin’s aerialist grandma.

7. The History Boys, Palm Beach Dramaworks — Dense with literary references and academic humor, this British memory play by Alan Bennett looks at a class of university-bound students caught in a tug-of-war between education for its own sake and “teaching to the test.” Director J. Barry Lewis was fortunate to have the services of actor Colin McPhillamy as a quirky, flawed instructor who shaped impressionable minds, played by eight relatively new, but verbally nimble young men as the Oxford and Cambridge wannabes. 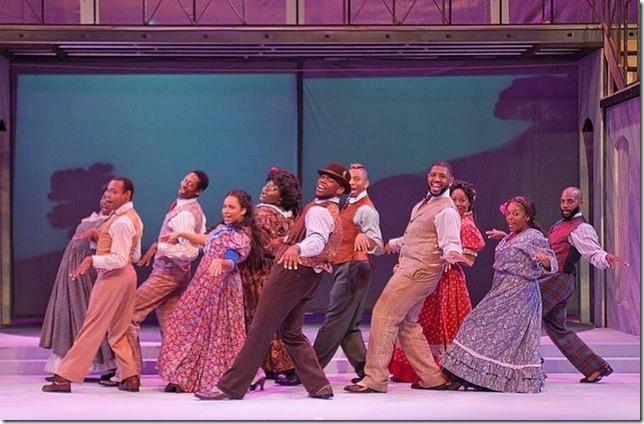 8. Ragtime, Actors Playhouse — The Maltz is not the only company to take on huge-cast musicals with significant casting challenges. Director David Arisco and his cast of almost 40 performers presented the region’s first homegrown production of the 1999 show based on E.L. Doctorow’s novel of fictional and real characters intertwined in America’s melting pot at the turn of the 20thcentury. Balance and focus were the hallmarks of Arisco’s work, a high point in the company’s history, thanks to stellar work from Melissa Minyard as insecure, but increasingly liberated Mother; fiery, noble Don Juan Seward II as reluctant terrorist Coalhouse Walker Jr.; and Tally Session as resourceful Tateh, who will do anything to protect his young daughter.

9. Casa Valentina, GableStage — Before Harvey Fierstein became rich writing the books to Broadway musicals, he wrote, pardon the expression, “straight” plays, usually illuminating the gay world. A year-and-a-half ago, he returned to Broadway with a non-musical drama about a secretive bungalow colony in the Catskills where heterosexual men with a penchant for cross-dressing could come and indulge themselves away from the public eye. Nevertheless, the outside world is threatened by these men and an imminent attempt to close the place down leads to increased tensions among the guests. Joe Adler casting eye remained flawless, as he built a strong ensemble, arguably with Wayne LeGette and Cliff Burgess as delicately attractive in Ellis Tillman’s well-engineered gowns.

10. Bonnie and Clyde, Slow Burn Theatre — The company known for reconsidering underappreciated musicals took on Frank Wildhorn’s latest Broadway flop and showed it actually had plenty of firepower beyond the guns toted by the real-life title characters. The book shed light on the desperation of the Great Depression, but the emphasis was on the steamy love story between two show business-obsessed young people who happen to rob banks.

11. Glengarry Glen Ross, Maltz Jupiter — Yes, David Mamet writes profanely, exactly as his characters — a bunch of desperate real estate hawkers — would talk. So get over it, folks. If the language got in your way, you missed a high-testosterone production with an ensemble of some of the area’s best actors.

12. Summer Musical Reading Series, Palm Beach Dramaworks — Musicals can be dramatic too, as this company demonstrated again this summer with its increasingly staged, but well-sung concert-like presentations of Stephen Sondheim’s A Little Night Music and Tom Jones and Harvey Schmidt’s 110 in the Shade, musical adaptations of Smiles of a Summer Night and The Rainmaker.

Film: Playwright August Wilson began his chronicle of the African-American experience throughout the … END_OF_DOCUMENT_TOKEN_TO_BE_REPLACED

Film: Just in time with the opening of movie theaters in Palm Beach County comes the season’s most … END_OF_DOCUMENT_TOKEN_TO_BE_REPLACED

Music: The very last concert Franz Joseph Haydn attended in his life was in March 1808, about a year … END_OF_DOCUMENT_TOKEN_TO_BE_REPLACED