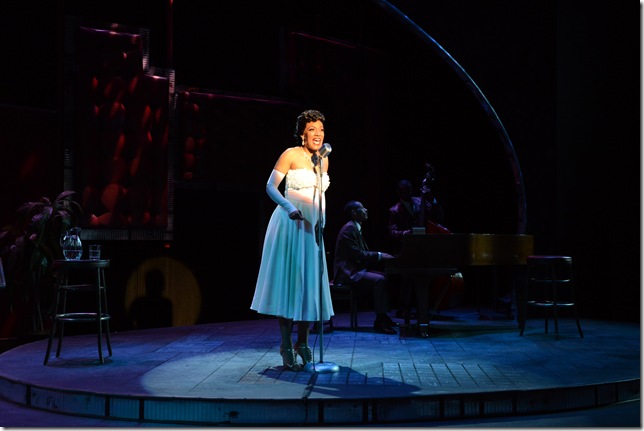 With many a stage biography of a show business legend, there is the rise to stardom from humble roots and then the frequently inevitable descent in the second half of his or her life. Lady Day at Emerson’s Bar & Grill, an intermissionless biographical nightclub act of the great jazz singer-songwriter Billie Holiday – born Eleanora Fagan – is almost entirely descent.

The Billie depicted is a few months away from her death in 1959, addicted as she is to heroin and alcohol. Still, she is a fighter, determined to get through a dozen or so of the songs with which she has been closely associated, without being knocked off her feet.

So here she stands, wobbly but unbowed, back at a seedy lounge in South Philly where she appeared in  the early days of her career, in the city where Billie was once tried and convicted of drug possession, leading to a year-long imprisonment and a revoking of her license to perform in cabarets. Her life is currently in shambles, yet despite it all, that clarion, pain-laced singing voice remains triumphant.

At Palm Beach Dramaworks, the stand-in for Holiday is Tracey Conyer Lee, an impressive performer who manages to channel the legendary vocalist without attempting an impersonation. Coaxed and cajoled by Holiday’s longtime pianist, Jimmy Powers (Brian P. Whitted), she struggles through her set of blues-tinged numbers, including such signature numbers as “God Bless the Child” and “Strange Fruit,” other dour songs of lost love and regret (“I Wonder Where Our Love Has Gone,” “Foolin’ Myself”) and even a few upbeat tunes (“What a Little Moonlight Can Do,” “T’ain’t Nobody’s Business If I Do”).

Between numbers, Holiday bears her soul to us, sifting through her personal life as if at a confessional, an unlikely occurrence for the famously guarded singer. Lanie Robertson’s play is well-researched and skillfully written, even if it falls into the static and artificial traps of the one-person show genre.

Still, there is plenty of reason to head to Dramaworks during the next two weeks, chiefly to see Lee’s tour de force performance. She sings quite well, but it is the portrait of the dissipated woman trying to rally herself to perform that is so striking. And when, late in the evening, she heads offstage for a heroin fix, Whitted fills in with a jaunty jazz riff on the piano. Director J. Barry Lewis guides the two of them through the play-with-music, doing what he can to finesse the one-person show landmines, succeeding by taking a back seat to the impressive Lee. 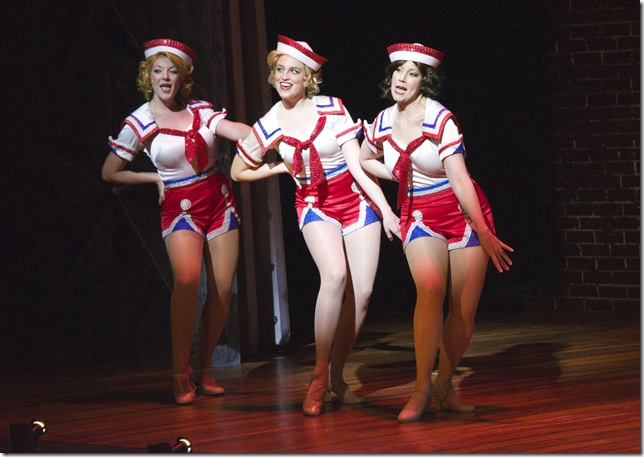 In its two short seasons, Boca Raton’s Wick Theatre has demonstrated its ability to pull off such large-scale, classic musicals as La Cage aux Folles and Man of La Mancha. Still to be determined, though, was whether it could do as well with a compact, high-style cult favorite show such as 1968’s Dames at Sea.

The diminutive size of the show is its main joke, since it winks at the overpopulated, precision production numbers by Busby Berkeley and plays with the hokey plots of such vintage movie musicals as Golddiggers of 1933 and 42nd Street, all with a tap-happy cast of only six.

Managing such a task calls for exceptional performers who can carry and elevate less-than-first-rate material. (The original off-Broadway production of Dames at Sea, for instance, introduced a dynamo kewpie doll named Bernadette Peters.) At the Wick, the cast is skilled, but merely mortal, and unable to keep the mirth bubbling over the show’s brief, but feels longer 90 minutes.

Typical of the company is squeaky-voiced, blonde Lindsay Bethea as Ruby (as in Ruby Keeler, a Berkeley mainstay), an agile tapper and pleasant enough singer, but with insufficient charisma to handle the leading role chores. Shades of 42ndStreet, Ruby arrives in New York from Utah and within 24 hours she lands a chorus job in a Broadway show and falls madly in love with a songwriting sailor (Alex Jorth) named Dick (as in Dick Powell).

Things are going so well for Ruby, it is soon time for a setback. The theater they are about to open in is suddenly scheduled to be demolished, but the show’s star, brittle diva Mona Kent (Laura Hodos) persuades a naval captain with whom she has a history to let them perform aboard his battleship.

The first act is largely a lead-in to the show at sea, and it never catches fire, despite the efforts of director Michael Ursua and especially choreographer Angela Morando-Taylor. Act two is considerably more lively, opening with the title tune and some snazzy tapping by Jorth and Blake Spellacy as his sailor sidekick, Lucky. Also upping the cleverness quotient is “The Beguine,” a duet for Mona and the Captain (Gabriel Zenone) with some wince-inducing rhymes for “Pensacola.” Eventually heartbreak comes to Ruby, but it is mainly a song cue (“Raining in My Heart”). All of this is mere preface to the finale, where Ruby must fill in for a seasick Mona, catapulting her to stardom with her tapping, baton twirling and cartwheels.

Bethea needs to wow us, but she is overshadowed by the naturally comic Hodos and Alison McCartan as Ruby’s roommate, a more proficient dancer. Visually, the production relies on projections by Josieu Jean, opening with movie-style credits and ending the first act with a wrecker’s ball. The first act scenery looks oddly unfinished, but after intermission the design work improves with a center stage battleship bridge that houses musical director Caryl Fantel and her snappy four-piece band.

Dames at Sea is not one of the Wick’s best efforts, but it is light and frothy. Hardly a must-see show, but it might suffice for an undemanding evening’s entertainment.

Film: Playwright August Wilson began his chronicle of the African-American experience throughout the … END_OF_DOCUMENT_TOKEN_TO_BE_REPLACED

Film: Just in time with the opening of movie theaters in Palm Beach County comes the season’s most … END_OF_DOCUMENT_TOKEN_TO_BE_REPLACED

Music: The very last concert Franz Joseph Haydn attended in his life was in March 1808, about a year … END_OF_DOCUMENT_TOKEN_TO_BE_REPLACED