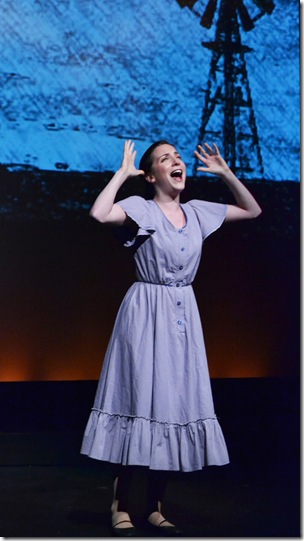 The musical team of composer Harvey Schmidt and lyricist Tom Jones hit the jackpot their first time out with an intimate, endearing love story, off-Broadway’s The Fantasticks. But they wanted Broadway success, so they next adapted N. Richard Nash’s The Rainmaker on a larger scale, with a full, though essentially superfluous, chorus of townfolk, dramatic Agnes de Mille choreography and Broadway-scale orchestrations.

The year was 1963, the show was 110 in the Shade, and lightning did not strike twice for the songwriting team. Although the score was recognized for its countrified lilt, the production remained in the shadow of such blockbusters as Hello, Dolly! and Funny Girl, managing to eke out a run of 330 performances.

Eight years ago, 110 in the Shade returned to Broadway in a revival that starred the luminous Audra McDonald as the show’s blossoming wallflower, Lizzie Curry. Now, Palm Beach Dramaworks gives it the company’s popular staged concert treatment, chiefly to showcase the soaring soprano voice of Jessica Hershberg (Rosabella in last summer’s Most Happy Fella).

Although director Clive Cholerton’s bare-bones production has many elements worth recommending, Hershberg is certainly the main one. She compels us to care for Lizzy, a physically plain woman drifting into spinsterhood, sporting a severe self-image deficiency.

But that is about to change with the arrival of Starbuck (Cooper Grodin), a smooth-talking drifter who shows up, claiming to be able to bring rain to her drought-stricken Texas town. It seems likely that Starbuck is a con man, but if he can make Lizzy believe in herself, he would be worth the $100 retainer Lizzy’s dad (William Parry) paid him.

Hershberg is so touching as the emotionally wounded Lizzy, largely because she gets the best of the Schmidt and Jones score to sing. She has us from her initial want song (“Love, Don’t Turn Away”), and cements our empathy for the characters with an angry solo about her romantic prospects (“Old Maid”), an out-of-character, letting-her-hair-down number (“Raunchy”) and a lilting tune of happiness within her reach (“Simple Little Things”).

It is easy to see why she is drawn to Grodin, even as we instinctively do not trust Starbuck, alternately callous and tender. As he delivers “The Rain Song” with revival meeting bravado, just try not to think of Prof. Harold Hill and his sales job with “Trouble.” Parry — last summer’s Zorba — is protective and paternal as Lizzie’s dad, Nick Duckart and Clay Cartland lend solid support as Lizzie’s caring siblings and Shane R. Tanner adds a few grace notes of gravity as the town sheriff, a more likely match for Lizzie.

Cholerton really needs a new word for this production format, which is hardly a “concert.” Over the years, they have become increasingly staged and memorized, with the music stands positioned around the performance area a mere formality. For 110 in the Shade, Michelle Petrucci adds a few nice de Mille-esque dance steps, Howard Breitbart and his four-piece band supply a flavorful accompaniment and Sean Lawson’s grainy photo conversion projections are a mood and locale-rich substitute for a set.

Dramaworks’ summer concerts are not necessarily “theater to think about,” but they do strike the heart and give the audience something to hum on the way home. And in Hershberg, the troupe features a performer to marvel at. 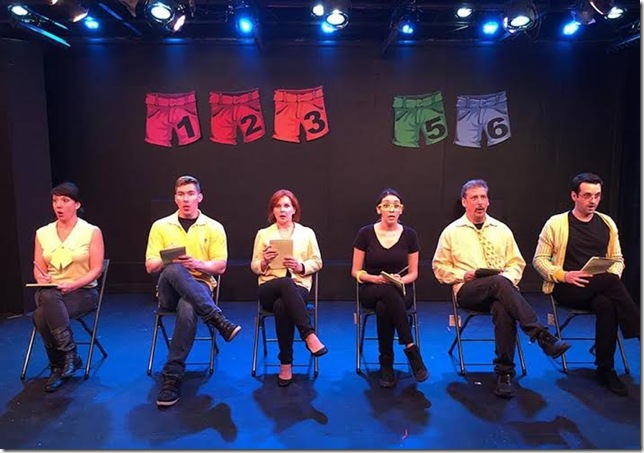 For the third — pardon the expression — “straight” year, the gay-oriented Fort Lauderdale theater company City Island Stage has joined forces with Miami’s City Theatre for an evening of short plays with an LGBTQ theme. In fact, in one of them — Michael McKeever’s verbally clever The Agenda — winking fun is made of the politically correct alphabet soup in today’s lesbian-gay-bisexual-transgender-queer terminology.

Like City Theatre’s Summer Shorts, of which Shorts Gone Wild 3 is a spin-off, the emphasis is on comedy, but often pointed humor with a socio-political spin, and occasionally a dramatic tone. A cast of six sprints through the eight scenes — four by South Florida writers — on a mostly bare stage, with the emphasis on the texts and the performers.

The order of the playlets is determined by the audience, an interactive device involving numbers picked out of a hat. Cast members joke about complaints that the order is rigged, which is unlikely, yet at the performance I attended the only two scenes with the entire company in them were selected for the opening and closing positions. Hmm, that’s a little suspicious.

The quality of the material is quite high and while often about gay characters, usually of a universal nature that theatergoers of all orientations can relate. The strongest piece, a two-hander called The One, by Sheri Wilner, concerns a couple from high school (Nikki Fridh, Antonio Amadeo) reuniting and sifting through their past together, long after he has come out of the closet and is on the verge of marrying.

Gay marriage is the topic de jour for several of the plays, including Paul Rudnick’s My Husband, a comic scene between a stereotypical Jewish mother (Christina Groom) and her unattached gay son (Craig Moody) whom she pressures to get married for her own social standing. The scene is cute, but too dependent on one-liners.

Anthropology, by Patricia Cotter, finds two former lovers (Fridh, Gladys Ramirez) meeting unexpectedly and awkwardly in the anthropology section of a book store. One has recently returned from her honeymoon, but the other has clearly never gotten over their relationship. Both Anthropology and My Husband were performed in Summer Shorts in recent years, somewhat more capably.

Two area directors — Michael Leeds and Stuart Meltzer — try their hands as playwrights and both acquit themselves well. Leeds’ I’m Going First looks at two gay partners (Amadeo, Larry Buzzeo) dragging their feet before going into church for a memorial service of a friend, bantering between themselves about which of them will die first and how the survivor will cope. The light tone darkens effectively as we learn that the Buzzeo character has been waiting for the results of a suspicious biopsy.

Meltzer’s scene, Quiche and Quinoa, takes place in a restaurant where a high-maintenance woman (Groom) has assembled her best — and bitchiest — friends (Fridh, Buzzeo) for an emergency lunch for a surprise announcement. Suspense and laughter ensue.

Also from the area is playwright Tony Finstrom, whose Oldest Living Chorus Boy (Buzzeo) reminisces about his bygone career, which included such classic Broadway flops as Kelly and Jennie, as the rest of the cast recreate his memories. The scene is aimed at those with an affection for Broadway trivia.

As with Summer Shorts, the energy of the performers helps considerably and the cumulative effect is an enjoyable evening of theater. “Wild” may be overstating the case, but Shorts Gone Wild 3 is certainly entertaining.

Film: Playwright August Wilson began his chronicle of the African-American experience throughout the … END_OF_DOCUMENT_TOKEN_TO_BE_REPLACED

Film: Just in time with the opening of movie theaters in Palm Beach County comes the season’s most … END_OF_DOCUMENT_TOKEN_TO_BE_REPLACED

Music: The very last concert Franz Joseph Haydn attended in his life was in March 1808, about a year … END_OF_DOCUMENT_TOKEN_TO_BE_REPLACED