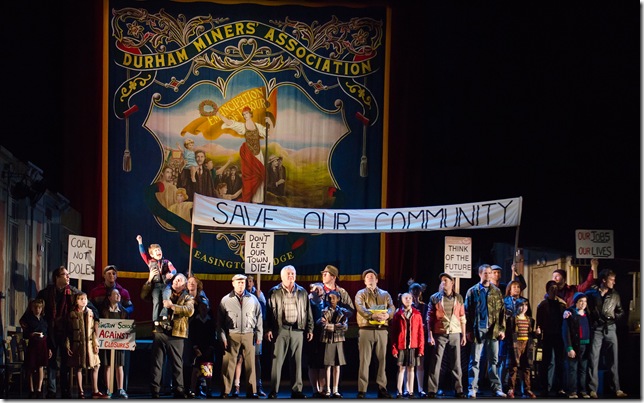 It is OK to be different and to follow your dreams. Sentiments like that seem banal in a contemporary urban context, but for a 10-year-old son of a Northern England coal miner who yearns to be a ballet dancer such aspirations are the stuff of involving drama. Or perhaps musical theater.

They are, of course, the dilemma of Billy Elliot, the youngster first encountered in the 2000 film, directed by Stephen Daldry from a screenplay by Lee Hall. They, along with the movie’s choreographer Peter Darling and rock- songwriter-turned-theater-composer Elton John have — pardon the expression — mined this material once again for the stage, in an involving musical that captivated London, won 10 Tony Awards on Broadway and has received similar success for the well-cast and expertly produced road company now at West Palm Beach’s Kravis Center through Sunday.

The challenge for a production like this is ever greater than for the movie — to find a young talent that can not only master the classical ballet, tap, character dance and even hip-hop that Darling has devised, but perform it week in and week out.

Casting directors combed the nation’s dance studios for such remarkable youngsters, four of whom take on the title role in rotation. And judging from the energetic, unflappable work of Noah Parets, 13, seen at Tuesday’s opening night performance, Billy Elliot is in very good hands. And feet.

What gives Billy’s quest additional drama and gravitas is that it occurs amid the British national mineworkers’ strike of the mid-1980s, at a time when Prime Minister Margaret Thatcher was attempting to bust that union. Billy’s father and brother are both miners, so money is scarce for the Elliots for necessities, let alone the 50 pence for ballet class.

Parets — and the three other Billys, including Boca Raton’s Mitchell Tobin — carries the show on his tiny shoulders, though there are several solid performers in key supporting roles. As Billy’s dad, Rich Hebert makes the transition from uncomprehending and gruff to soft-hearted, with some nice comic touches in the Royal Ballet auditon sequence. Janet Dickinson is on-target as the boy’s chain-smoking ballet mentor and Sam Poon is a genuine scene-stealer as Billy’s flamboyant pal Michael, particularly on the gay-friendly duet, Expressing Yourself.

If it had not been for the soft economy, Billy Elliot would probably still be running on Broadway. It is anything but a formulaic show; indeed, it is surely the first great musical of this century. 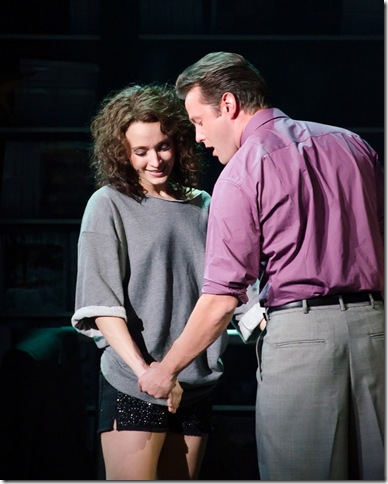 Downpour of water over the heroine in a steamy dance routine. Check.

For fans of the iconic 1983 movie Flashdance, certain images need to be there as it gets adapted for the theater, and Flashdance the Musical hits all those marks. It also has too many subplots, secondary characters and a few redundant new songs, about par for a show slowly making its way to Broadway.

On the plus side, Flashdance has plenty of flashy, sensuous dance, thanks to choreographer Sergio Trujillo (Jersey Boys, Memphis), who demonstrates an awareness of how to re-invent a movie for the stage in his directorial debut.

The show now playing at the Broward Center in Fort Lauderdale is reportedly much revised since its initial false start in London in 2008. It loses its momentum in the second act as the show veers away from steel mill welder and dancer wannabe Alex (svelte, kinetic Emily Padgett, coiffed in a wig of brunette ringlets like the movie’s Jennifer Beals), but that seems fixable with editing as Flashdance continues its shakedown tour.

By a quirk of scheduling, the show arrives in South Florida at the same time as Billy Elliot, with which it has several superficial similarities. Both are about young dancers with unschooled talent who dream of academy training. Both stories take place amid a blue-collar industry in economic jeopardy. And both are strong in dance, either moving the story along or for its own sake.

Pittsburgh steel worker Alex welds by day and dances erotically — albeit clothed — in a local club by night. But oh, how she yearns to go to the Shipley Academy and learn what all those girls in tutus and hair buns know. Besides, the steel mill has fallen on hard times and layoffs are imminent, to be handed out by the young, handsome grandson of the mill owner who just happens to be attracted to Alex.

As with the movie, the story line is far-fetched at best, but Trujillo distracts us from thinking too much about it. Besides, Padgett is so appealing that we root for her and her dreams, however improbable.

Everyone seems to want something, though, including her naïve pal Gloria (Kelly Felthous) who gets lured to a sleazy strip club in search of stardom and her painfully unfunny boyfriend (David R. Gordon) who wants to be a stand-up comic. Then there’s Alex’s boss, Nick (Matthew Hydzik), who needs to prove he can manage the mill, but wants to be friends with his expendable workers. And the club owner (Matthew Henerson) who is trying not to go out of business. And on and on.

The handful of songs from the movie — Maniac, Gloria, What a Feeling — are back, augmented by about 20 others by Robbie Roth and Robert Cary, mostly in an ’80s rock vein. Roth has a good ear for that period sound, but the lyrics — at least those that are intelligible —lack invention.

Klara Zieglerova’s muscular, mobile set design merge well with Peter Nigrini’s projections to form an attractive, versatile physical production. Broadway audiences have embraced less well constructed musicals based on movies from this era, like Footloose or Saturday Night Fever, so there is every reason to think they will flock to Flashdance, too. 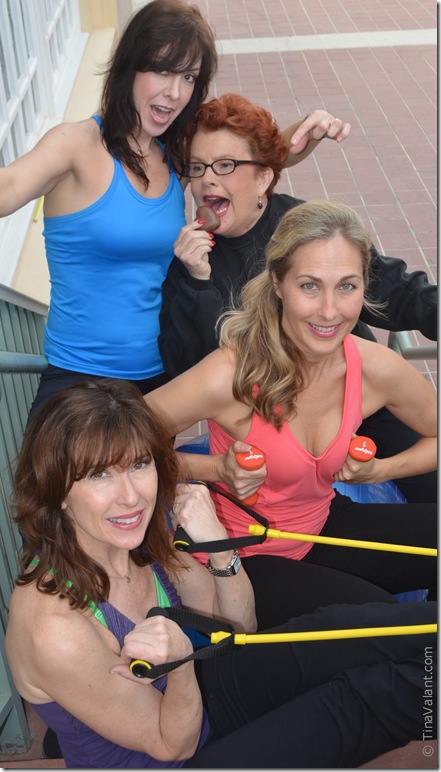 Plaza Theatre producer Alan Jacobson insists he was not trying to emulate the mega-successful girl-power song-parody revue Menopause, the Musical when he wrote Waist Watchers, the Musical, but the two shows could not be more similar if he had overlaid one on top of the other and used a template.

That is not necessarily a bad thing. Your reaction to Waist Watchers probably will echo your opinion of the earlier show, and judging from the frenzied, almost entirely female audience I was among in Manalapan recently, The Plaza has a commercial hit on its hands. The theater has already extended the show’s run into May, and plans are afoot to keep bringing it back as long as the demand exists.

OK, so Waist Watchers ain’t art. That was never the promise when Jacobson took over the playhouse used for so many years by Florida Stage.

Although it is not exclusively geared to women like Menopause is, Waist Watchers does have an all-female cast and talks about food and weight issues as if they were primarily the concern of women. As a marketing decision, Jacobson was probably on-target, judging from the matinee crowd I watched greet each familiar tune with squeals of glee, join in with little prompting to hand-and-arm aerobic exercises and ultimately jump to their feet with admiration at the final curtain.

The show is set in a gym locker room, where the four-member cast sing about the difficulties of dieting, food obsessions, plastic surgery and their eternal efforts to look good in order to attract or retain their men.

Director Andy Rogow, who has been attached to the show since it premiered six years ago under the title Food Fight, knows the importance of casting talented, energetic women who are committed to selling this only intermittently entertaining material.

The cast is led by Katie Angell Thomas as the drill sergeant-like gym instructor and the Plaza’s resident dynamo Missy McArdle as the older, out-of-shape client, who has to learn — author’s message! — to be satisfied with her own body type. Filling out the cast are Jeanne Bennett and Shelley Keelor as two well-toned workout enthusiasts with other personal challenges.

McArdle seems to have the show’s best numbers or she delivers them more disarmingly than the others. She certainly earns a rousing reaction from the audience singing the wistful If I Were a Size Two, sung, naturally, to the tune of Fiddler on the Roof’s If I Were a Rich Man.

It is one of some two dozen songs based on pop music hits and Broadway standards. Unfortunately, once the lyric’s initial spoofing twist is stated, the rest of the number is usually just repetition. Still, the cast delivers the score with gusto, aided by Kevin Black’s athletic choreography.

Some shows, like Menopause and Waist Watchers, are geared to their target audiences, with little expectation of critical respect. So the Plaza will have to settle for a box office success, chuckling all the way to the bank.

Film: Playwright August Wilson began his chronicle of the African-American experience throughout the … END_OF_DOCUMENT_TOKEN_TO_BE_REPLACED

Film: Just in time with the opening of movie theaters in Palm Beach County comes the season’s most … END_OF_DOCUMENT_TOKEN_TO_BE_REPLACED

Music: The very last concert Franz Joseph Haydn attended in his life was in March 1808, about a year … END_OF_DOCUMENT_TOKEN_TO_BE_REPLACED