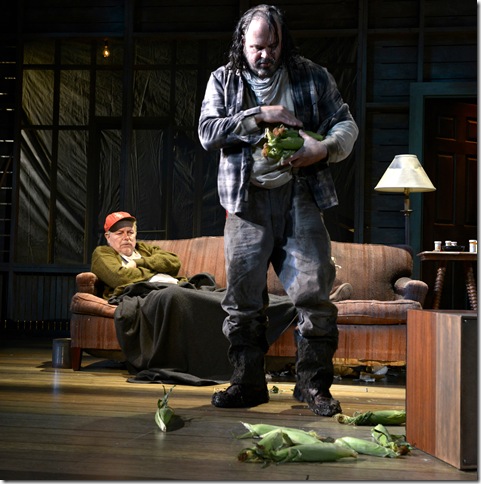 Diving headlong once again into the murky pool of absurdist theater, Palm Beach Dramaworks — the home of “theater to think about” — offers up Sam Shepard’s Buried Child, which features few concrete ideas but many stark dramatic images calculated to elicit emotional reactions.

With such plays as Fool for Love and True West, Shepard has demonstrated a fascination with the precarious American family unit. The same is evident in Buried Child, about a prodigal grandson’s return from New York to the rundown Illinois farm of his youth. The only problem — well, hardly the only problem — is that none of his relatives recognize him.

If your view of Americana is closer to the optimism and sentimentality of Norman Rockwell, you are certainly in for a jolt from Shepard’s opposing perspective. His initial image of decay is couch potato Dodge (Rob Donohoe), slumped over watching television, sucking on cigarettes, coughing and wheezing between bellowed belligerence aimed at his wife Halle (Angie Radosh) upstairs.

In walks his son Tilden (Paul Tei), a slow-witted hulk carrying an armload of corn, grown out of season from a field that has long been infertile. It is an arresting visual, topped by his dumping the corn on the floor, shucking it and wallowing among the husks. Then there is Tilden’s snarling, hobbled brother Bradley (David Nail), whose leg had been severed by a chainsaw. And you think your family has problems?

The main event, however, is the arrival of grandson Vince (Cliff Burgess), Tilden’s son, who returns to the fold with his girlfriend Shelly (Olivia Gilliatt), after six years away. The play is something of an inkblot test for theatergoers to make of it what they will. Woven throughout are references to the title child, whose demise remains as much a mystery as the connection of its burial in the field is to the sudden harvest.

Even if the play leaves you scratching your head, director J. Barry Lewis’s production contains several performances to admire. Donohoe is usually an understated presence onstage, but here he is explosive and riveting as decrepit Dodge. Conversely, Tei tends toward bravura acting, but is all the more compelling as Tilden for his near-catatonic approach. And when Vince exits, leaving Shelly to fend for herself amid this house of strange men, Gilliatt comes on strong as the pivotal outsider.

Buried Child is the kind of play that will surely divide audiences, but if you have a taste for the absurd, particularly the darkly dramatic sort, this production should pull you in, grab you by the throat and leave you shaken. 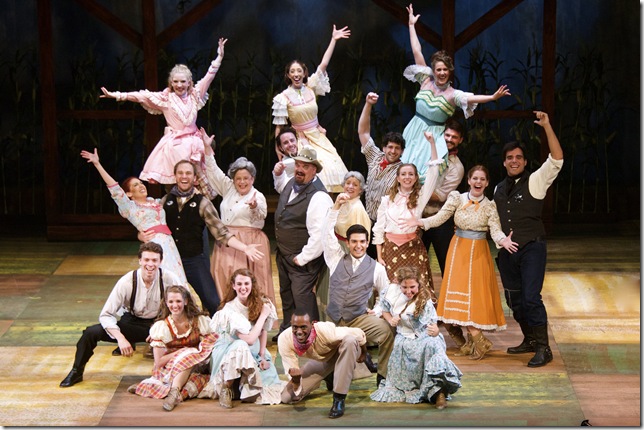 There are few musicals more classic that Oklahoma!, the 1943 first collaboration between Richard Rodgers and Oscar Hammerstein II, one of the earliest shows to integrate fully story, song and dance. And Boca Raton’s Wick Theatre gives it a traditional production, with choreography based on Agnes de Mille’s original steps and a sturdy staging faithful to the period by the company’s most reliable director Norb Joerder (La Cage aux Folles, Mame).

What was experimental, even daring, 70 years ago has understandably grown conventional, but the songs of Oklahoma! have since become standards of the American songbook. With remarkable assurance, the show starts without a flashy opening number, but instead a woman sitting center stage in a rocker, silently churning butter while a cowboy enters and sings about the beautiful morning.

That cowboy, Curly McLain, soon declares his romantic interest in farm owner Laurey Williams, who coquettishly plays hard to get, claiming to be just as interested in Jud Fry, the hulking foreman. Rather than wrestle or duel over her, the two men bid for her hand, or at least for her box lunch.

Laurey’s quandary is expressed in de Mille’s “Dream Sequence,” a lyrical, then dramatic dance that was innovative when new, but now feels quaint. Acknowledging the differences in attention spans between today’s audiences and those of 1943, Joerder lops a few minutes off the dance, a welcome bit of heresy.

Casting for youth, Joerder imports courtly Ian Parmenter as Curly, an “aw, shucks” type with a booming singing voice, and comely Lindsey Bliven as Laurey, who matches him note for note. Establishing a formula that would continue throughout their careers, Rodgers and Hammerstein counter the leads with a supporting comic couple, light-on-his-feet Alex Jorth as dimwitted Will Parker and Leah Sessa, too shrill for my taste, as randy Ado Annie.

Dramatic musicals were exceedingly rare in the early ’40s and a dark, dangerous character like Jud was virtually unheard of. Perhaps that is why he remains the most compelling element of Oklahoma!, embodied here by a brooding Shane Tanner.

Joerder tips his hat to modern technology with the Wick’s new projection system, which allows stagewide images on the front curtain that can change locales instantly. On the other hand, the company has started to rely again on recorded music tracks, an unwise cost saving. 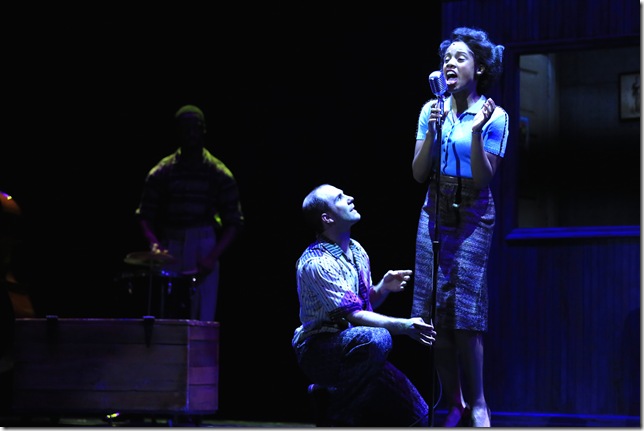 Some years are very competitive for the best musical Tony Award, and then there are years like 2010. That was when Memphis walked off with the top Broadway prize, beating a very weak field of American Idiot, Million Dollar Quartet and Fela.

But win it did — as well as for best score and best book — so naturally it has spawned a road tour, parked at the Kravis Center this week. Ambitiously, with a script by Joe DiPietro and a score by David Bryan (of Bon Jovi), it tells a story of racial strife and eventual progress in racial co-existence in the title Southern city, as well as the evolution of pop music in the early days of rock ’n’ roll.

You could think of Memphis as a cross between Dreamgirls and Hairspray and those two better shows probably will come to mind as you watch. Still, it makes for a high energy, infectious evening, with an appealing cast that will have you caring about their characters, even as they struggle against the musical’s frequent clichés.

The show centers on Huey Calhoun (Daniel S. Hines), a fictional version of Dewey Phillips, a local white disc jockey who popularized black music by helping it cross the racial divide on the airwaves.

As Memphis has it, he stumbled into an all-black club one night, lured by the sounds of songstress Felicia Farrell (Zuri Washington), with whom he is instantly smitten. The clientele doesn’t want him there and they sure don’t want him attaching himself to Felicia. But he sits down at the piano and disarms them by singing about “The Music of My Soul,” undoubtedly a simplification of what really occurred.

Huey is depicted as an uneducated but ambitious goofball, who talks his way into a job selling records at a department store, then a better one at a radio station, quickly becoming the highest-rated disc jockey in town. Despite his celebrity, he and Felicia learn they have to keep their relationship secret, a lesson learned at the receiving end of a baseball bat.

Hines somehow makes Huey’s rapid rise credible and with a voice like Washington has, you can sense that Felicia will be going places. Bryan democratically deals out solos to several supporting players. There’s a bartender (Jonathan David Randle) who suddenly gains back his voice after being mute for years, and the radio station janitor (Rendell Debose), whose sole purpose in the show is to explode with a number called “Big Love.” And expect to take an instant dislike to Huey’s racist mom (Pat Sibley), until a spotlight hits her and she launches into a good time gospel number.

So it goes with Memphis. It seems to want to impart a serious statement about race relations, but when the chips are down, it settles for audience-friendly entertainment.

Music: The very last concert Franz Joseph Haydn attended in his life was in March 1808, about a year … END_OF_DOCUMENT_TOKEN_TO_BE_REPLACED

Film: Major League Baseball culminates each season with the World Series, but to find the true … END_OF_DOCUMENT_TOKEN_TO_BE_REPLACED