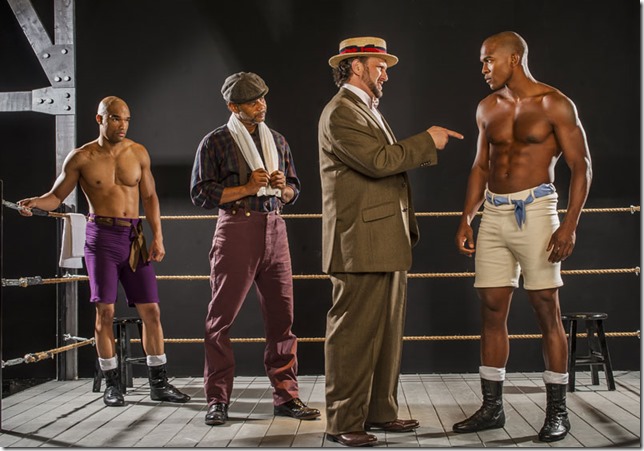 There are many ways to tell a story, as demonstrated by the compact, yet high-energy The Royale, now receiving a knockout production at GableStage. It covers essentially the same ground as the sprawling, epic The Great White Hope, the 1969 Pulitzer Prize winner by Howard Sackler.

Both plays offer fictional looks at the first African-American heavyweight champion and the challenges he faced inside and outside of the boxing ring. The earlier play had a cast of dozens, where The Royale — written by Miami native Marco Ramirez — conveys a similar account with only five actors and a running time of less than 70 minutes, without ever feeling like this tale of celebrity, racism and the price of victory shortchanges its themes.

In The Royale, real-life boxer Jack Johnson has morphed into Jay Jackson, a dapper, self-confident, talented fighter having difficulty getting major matches and moving up the boxing ladder to the title because of his skin color. As played by charismatic, well-toned Aygemang Clay in his professional stage debut, it is hard not to think of Muhammad Ali, even if his career had not been recapped so extensively because of his recent death.

The Jackson that Ramirez envisions has a similar swagger and verbal quickness, which both aids his ascension to prominence and becomes a source of resentment by the white world.

But fight Jackson does, staged powerfully by director Joseph Adler, with the aid of fight choreographer Rudi Goblen and boxing coach Bert Rodriguez. In their stylized approach, boxing is not a contact sport, as Clay and his initial opponent — and later sparring partner — Ryan George are shown facing off against each other, facing the audience, split-screen style. At least as important to the action is the rhythmic clapping and foot stomping of the boxers as further simulation of the pugilistic action.

Narrating the play and hyping each fight is the reliable Gregg Weiner as Jackson’s manager-promoter Max, who sees the financial potential in his client, as well as the probable danger in pushing him past racial roadblocks. Veteran actor André Gainey manages to break through the clichés in his wise, old trainer character and Shein Mompremier makes an impressive GableStage debut as Jackson’s sister, initially reserved and sedate, and later anything but that as she, in effect, climbs into the ring.

The Royale opened earlier this year at New York’s Lincoln Center, where it was critically acclaimed. Adler quickly snapped up the rights for the area premiere and demonstrates what a taut, thought-provoking, hard-hitting drama Ramirez has devised. 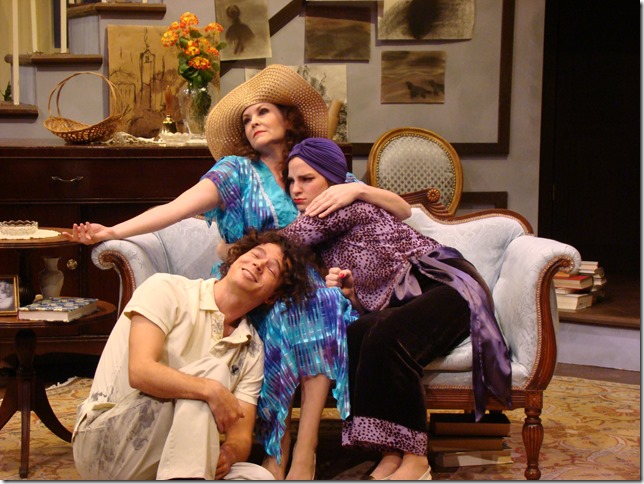 In his early comedy, 1925’s Hay Fever, the droll playwright with “a talent to amuse,” Noel Coward, both celebrates and satirizes theater folk. Yes, he suggests, they are terribly self-absorbed and self-indulgent, but surely we would rather spend time with them than those dull souls without an artistic bone in their bodies.

So he takes us to the British country home of the fictional Bliss family. Foremost among them is Judith Bliss, a grande dame of the stage who recently did the unthinkable — announcing her retirement from the glamour of the theater. Possibly getting her to rethink that decision is her house husband David, a middling novelist who reads his deathless prose to anyone who will listen. And there are their two grown — though not matured — offspring, Sorel and Simon, who lounge about the house striking histrionic poses.

Each of the Blisses has invited a guest of the opposite sex to spend the weekend, a comic clash of sensibilities. The high point of their time together is when the guests are forced to play arcane word games and judged hopelessly inadequate for the task by the Bliss clan. Then there is the potential for romance in the air, but it goes nowhere, for the Blisses could never love anyone but themselves. So they return to their egotistical preoccupations, while the guests pack their bags and slink away.

That’s about it for Hay Fever’s plot, which places the burden of a production’s success on the performers. They must delineate the chasm between the arty types and the civilians, which is exactly what the cast of Florida Atlantic University’s Festival Rep 2016 has difficulty doing.

Assistant professor Kathryn Lee Johnston sets the right tone of hauteur as diva Judith, but so many of the graduate student actors slip into a broad sitcom style that negates the play’s purpose.

They could learn from Shannon Ouellette, who has a relatively small role as Clara the housemaid, but makes the most of each brief appearance with light, deft touches. The same goes for aptly awkward Ross Frawley and Brianna Handy, earning laughs getting frazzled in the word game sequence. Samantha Kaufman and Jordon Armstrong, however, are handed juicy supporting opportunities as the Bliss kids, but both overdo the arty posturing and the British accents.

Score points for scenic designer Thomas M. Shorrock, who contributes a well-appointed living room set, complete with a dramatic entrance-worthy staircase, even if it goes underutilized by director Jean-Louis Baldet. The other technical credits, including Larry Bauman’s costumes and Guy Haubrich’s lighting, are also assets to the production.

As some wag once said on his death bed, “Dying is easy, but comedy is hard.” He might have added, “And Noel Coward is even harder.” At least FAU took on the challenge, even if the results are awfully uneven.

Film: Playwright August Wilson began his chronicle of the African-American experience throughout the … END_OF_DOCUMENT_TOKEN_TO_BE_REPLACED

Film: Just in time with the opening of movie theaters in Palm Beach County comes the season’s most … END_OF_DOCUMENT_TOKEN_TO_BE_REPLACED

Music: The very last concert Franz Joseph Haydn attended in his life was in March 1808, about a year … END_OF_DOCUMENT_TOKEN_TO_BE_REPLACED