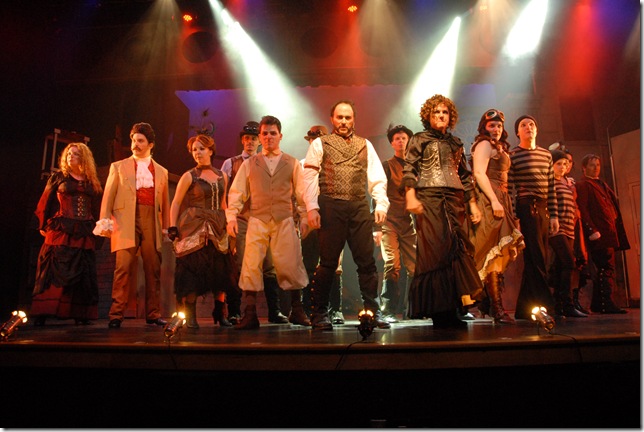 Stephen Sondheim is drawn to unconventional source material for his musicals, so it is hardly surprising that Slow Burn Theatre Company ― which gravitates towards the offbeat and challenging ― has an affinity for his shows.

Now ending its fourth season, it tackles the great composer-lyricist’s masterwork, Sweeney Todd, The Demon Barber of Fleet Street, a grisly but undeniably melodic Grand Guignol thriller that seemed so daring for Broadway when it first landed there in 1979.

But it not only won nine Tony Awards then, it has since been revived twice on Broadway, become a staple of opera companies around the country and was brought to malls and multiplexes by Tim Burton. It was probably inevitable that Slow Burn’s resident director-choreographer Patrick Fitzwater would produce Sweeney Todd, and he delivers it with all of the show’s full-throttle intensity, even if it is arguably the most mainstream musical from the non-union, low-budget, but wildly talented troupe.

He did not have to go far to find his Sweeney, the unjustly convicted barber who returns to London after serving time in Australia, obsessed with revenge against the crooked, lecherous Judge Turpin. Here he is played by co-artistic director Matthew Korinko, a strong brooding presence in good, deep voice, giving his best Slow Burn performance yet.

As Sond-heads know, Sweeney soon links up with the adoring Nellie Lovett (Karen Chandler), who rents him the room above her failing pie shop to re-establish his tonsorial parlor. Waiting to lure the judge into his chair, he keeps in practice by slitting the throats of his customers. Nellie then persuades him not to waste the corpses, but to allow her to use them as met pie filling, a scheme they trill about in the jaunty waltz, A Little Priest, the first act finale.

Discovering and casting untested talent is a particular talent of Fitzwater’s, which he demonstrated with the two young performers he found for the conjoined twins of Side Show. One of them, Kaela Antolino, is back as Todd’s empty-headed daughter Johanna, exercising her lovely soprano on the showy Green Finch and Linnet Bird. Fitzwater’s latest find is Boca high schooler Bruno Vida, making his professional debut as hair tonic shill Tobias, who croons the ironic lullaby Not While I’m Around.

The entire score ― and Slow Burn performs the entire score, including a couple of numbers often excised for time or taste ― is rendered deftly by conductor-keyboardist Manny Schvartzman and his six-man band. That’s not a lot of musicians for this symphonic score, but it is actually an augmented size compared to past Slow Burn combos.

And the company has a loyal design team that invariably works wonders on a shoestring budget. Ian T. Almeida supplies an intricate two-level set which we see from a variety of angles thanks to a manually operated revolve. Rick Pena’s costumes take a page from the show’s traditions, but also tip their caps to the steampunk literary movement.

The Broadway Sweeney Todd and all subsequent productions had minimal choreography, but Fitzwater has found ways to inject a bit more into the show with the music hall ensemble. Without shortchanging the show’s macabre aspects, this is an audience-friendly take on the material, and one more reason why you really need to head to far west Boca and get to know Slow Burn Theatre Company. 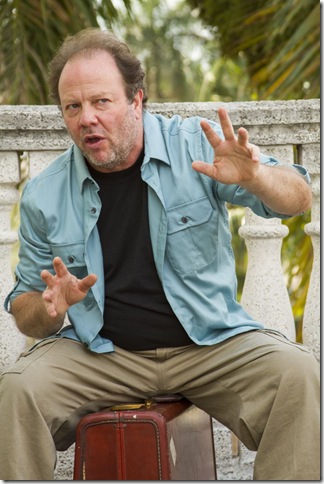 Homer’s epic account of the Trojan War, The Iliad, seems unlikely source material to be adapted to and contained by the stage. Yet actor Denis O’Hare and director Lisa Peterson not only figured out how to turn that trick, but also manage to extend the work’s reach to include and indict many more modern conflicts as well.

Called An Iliad, the written classic has become a one-man recitation in language both contemporary and conversational. OK, the solo character, known only as The Poet, does occasionally lapse into Greek, but that happens just for the sake of verbal atmosphere.

The theater piece premiered last year off-Broadway and has now been brought to South Florida by the fledgling Outré Theatre Company. It enlists the services of Avi Hoffman, who knows his way around one-man shows, but is usually seen in more ingratiating, audience-friendly fare.

Here, he is angry and deeply burdened by the responsibility of traveling from town to town, telling whoever will listen about the horrors of war. Ostensibly, he addresses the conflict between the great Achilles and the mighty Hector, but the slide projections that accompany his talk clearly link events in ancient Troy to our Civil War, Vietnam and, of course, those twin playing fields of terrorism and nation building, Iraq and Afghanistan. Although Homer’s original poem was largely a glorification of war, this version gives the tale an unmistakable anti-war spin.

Like Sisyphus, who was doomed to roll a boulder up a mountain for all eternity, The Poet’s lot is to recite his word pictures of human destruction until the world wises up and stops repeating its brutal mistakes. He would be advised not to hold his breath waiting for that to occur.

As staged by Outré’s artistic director Skye Whitcomb, An Iliad is anything but a static exercise. Hoffman wanders the stage, up, over and around Sean McClelland’s cluttered, war-torn ramparts set. At 100 intermission-less minutes, the play is a physical workout for the actor as well as a verbal one, including a sequence in which he sprints laps around the treacherously tiered environment.

An Iliad is an ambitious choice for Outré, but unlike the company’s opening show ― the musical The Wild Party ― it does not overreach in its physical production requirements. It may, however, have overreached in seriousness and substance and overestimated the Boca theatergoing audience.

The matinee I was at was very sparsely attended. Hoffman still gave a performance of impressive ferocity, but at the curtain call he acknowledged the disappointing turnout, wordlessly counting the audience, which barely took more than one hand.

Still, Outré and Hoffman both demonstrated what they are capable of. Those who miss it do so at their own peril. They would be missing a worthy new work, a new theater company deserving of attention and what will probably be one of the standout performances of the year.

Film: Playwright August Wilson began his chronicle of the African-American experience throughout the … END_OF_DOCUMENT_TOKEN_TO_BE_REPLACED

Film: Just in time with the opening of movie theaters in Palm Beach County comes the season’s most … END_OF_DOCUMENT_TOKEN_TO_BE_REPLACED

Music: The very last concert Franz Joseph Haydn attended in his life was in March 1808, about a year … END_OF_DOCUMENT_TOKEN_TO_BE_REPLACED