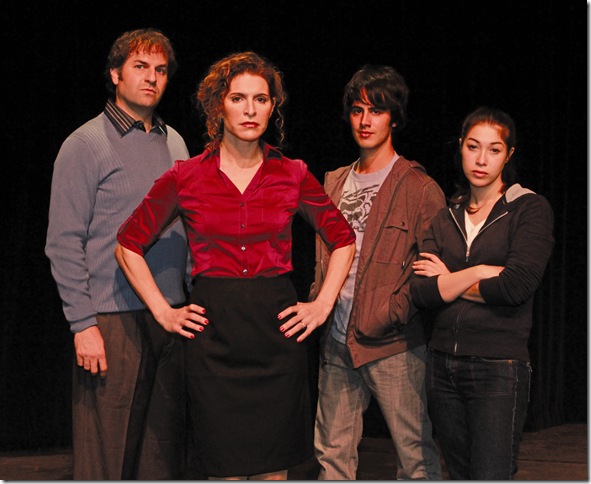 With so many musicals these days based on popular movies, it is hardly normal to encounter a show based on an original story, let alone the dramatic tale of a family mired in the grip of a member’s bipolar mental disorder.

Call it instead Next to Normal, the 2010 Pulitzer Prize-winning musical from the talented new songwriting team of Tom Kitt and Brian Yorkey. While they are mindful of the basic tenets of musical theater, there is little that is traditional about this gut-wrenching, emotionally jolting show that places the audience in the middle of a troubled family dynamic.

And while Actors’ Playhouse and its artistic director David Arisco produce traditional large-scale musicals such as Hairspray or Les Miserables very well, the company’s creative juices seem particularly stimulated when it leaves the mainstream. Think of Floyd Collins, Violet or Songs For a New World and add to them what is perhaps a new qualitative high for all concerned, Next to Normal.

Quick, what rhymes with “electro-convulsive therapy”? Yorkey’s lyrics dip into medical jargon, but at their core they sing about the human struggle for connection and that societal standard we deem normalcy. And if, because of a chemical or pharmacological imbalance, normalcy is not an option, the next best thing will do.

Certainly suburban housewife and mother Diana Goodman seems unable to cope with daily life, as the show’s ironic opening number, Just Another Day, puts it. In fact, Diana’s manic-depressive responses to everyday chores are taking a toll on her family — her caring, but clueless architect husband Dan, her neglected teenage daughter Natalie and her son Gabe, who may just be the root cause of Diana’s mental instability.

Much of the show’s plot concerns the efforts to find an answer for Diana’s dilemma, through the doctors who prescribe various mood-numbing drugs and, eventually, shock treatment. No, Next to Normal is not geared to the escapism entertainment crowd, but it is riveting theater, with its emotional impact only heightened by the musical through line.

The vocal demands of Kitt’s rock music and the acting demands of Yorkey’s script call for exceptionally skilled performers, and director Arisco has them. Even those who have enjoyed Jodie Langel as Eva Peron in Evita and the Narrator in Joseph and the Amazing Technicolor Dreamcoat at the Maltz Jupiter Theatre may be surprised by the polar opposites of fragility and power she brings to Diana. She conveys such heart-breaking mental confusion amid some full-throttle arias. It was an award-winning role on Broadway and could well be so again here.

Nor is there a weak link in the supporting cast, led by Eddy Rioseco’s rock star-like Gabe, explosively prowling the stage with I’m Alive. Sarah Amengual is more subdued as Natalie, but she too makes the most of a spotlight number (Superboy and the Invisible Girl). Mark Sanders (husband Dan) is the production’s anchor of sanity, Ben Liebert impresses as the boy friend Natalie keeps pushing away and Nick Duckart is deliciously subversive as the various doctors on Diana’s case.

Musical director Eric Alsford reportedly championed the show choice, and he leads the six-piece band with gusto. Because the score is probably unfamiliar to most of the audience and the rock sound calls for much amplification, perhaps the show’s most crucial support comes from sound designer Alexander Herrin, who has managed an aural balance that keeps the lyrics clear and vibrant.

Although its production requirements are considerable, Next to Normal will be done a great deal at regional theaters around the country this year. It is hard to believe that many of them will be as memorable as the current show at Actors’ Playhouse. 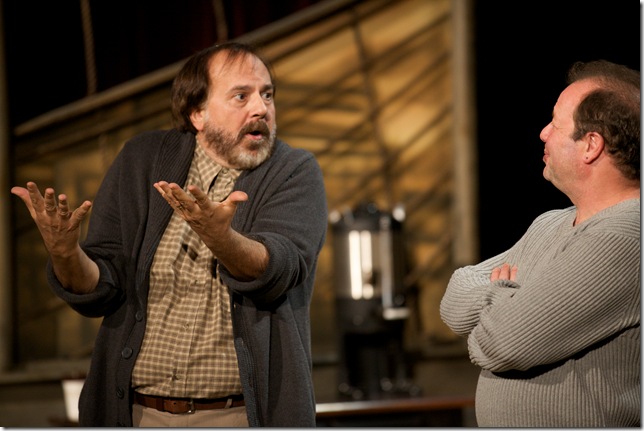 Donald Margulies was not new on the theater scene in 2000 when he won the Pulitzer Prize for Dinner with Friends, but if the committee had only waited five more years, I suspect they would have recommended him instead for the superior Brooklyn Boy. This semi-autobiographical play looks at the American grasp for success and the toll it takes on a novelist who exploits his geographic and ethnic roots, which he had long turned away from in his private life.

The script is a worthy choice to inaugurate Parade Productions, a promising new troupe that performs at the Studio at Mizner Park, a no-frills space carved out of the second floor of the former International Museum of Cartoon Art in Boca Raton. It suggests the good taste of artistic director Kim St. Leon and her dedication to entertaining works of substance, even if the production is somewhat erratic in its casting.

Certainly it is solid in its central role, novelist Eric Weiss — Ricky to his old friends back in Brooklyn — played by area favorite Avi Hoffman in one of his best performances in memory. Weiss, a self-loathing Jew, has turned his back on his religion, is impatient with his father who lies dying of cancer in a Brooklyn hospital and pays attention to his shiksa wife Nina only when she demands a divorce from him. In short, Eric is not particularly endearing, but Hoffman manages to earn some audience empathy for him with his own natural likeability.

It is after a visit to the hospital, with his new best-selling book — also titled Brooklyn Boy — in hand, eager for father’s approval, that Eric confronts his past. In the hospital cafeteria, he encounters a childhood friend, Ira Zimmer (the engaging, ethnically authentic Michael Gioia), who becomes annoyed at Eric’s condescending attitude about his native borough, but flattered that he inspired a minor character in the novel.

Ira will return for the moving conclusion of the second act, but before he does, Margulies sends Eric off on book tour to Los Angeles, where he is a stranger in a strange land fending off a young, attractive groupie in his hotel room. And later, it a scene that is too broad and obvious, he takes a meeting about a movie adaptation of his novel and learns how crass Hollywood can be. Director St. Leon should have guided her actors to play against the comedy instead of taking a sitcom approach, but Brooklyn Boy still snaps back with an impact as Margulies and Eric return to firmer ground on the East Coast.

Credit Parade Productions with the smarts to hire scenic designer Sean McClelland, who comes up with a multi-location unit dominated by the Brooklyn Bridge. It is a visual reminder that no matter where he goes, Eric remains under the gravitational pull of his hometown.

Overall, the evening is uneven, but the play’s strengths are sufficient to overcome such weaknesses. Parade is a welcome addition to the theatrical landscape, though it has announced a cautious approach to establishing itself, with its next production expected a year from now.

Film: Just in time with the opening of movie theaters in Palm Beach County comes the season’s most … END_OF_DOCUMENT_TOKEN_TO_BE_REPLACED

Music: The very last concert Franz Joseph Haydn attended in his life was in March 1808, about a year … END_OF_DOCUMENT_TOKEN_TO_BE_REPLACED