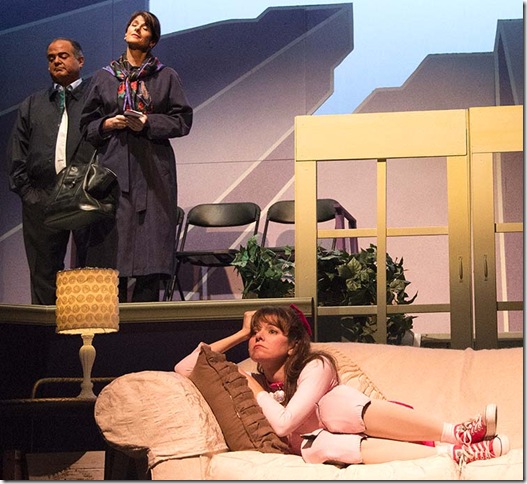 Playwright A.R. Gurney turned 65 the year he wrote the canine comedy Sylvia, so it is completely understandable that he had male menopause on his mind. Taking a break from his usual pre-occupation with the cultural peculiarities of WASPs, he gives us a peculiar romance ― between a guy mired in the crisis of midlife and a stray mixed-breed mutt.

Now on view at the Boca Raton Theatre Guild in a mostly satisfying production, Sylvia concerns a New Yorker named Greg (Keith Garsson) who hates his job selling money market accounts and is unhappy in his marriage to Kate (Patti Gardner). She teaches Shakespeare to underprivileged kids, a career which is blossoming while Greg’s is going sour.

Enter Sylvia, yapping loudly, jumping on the furniture, shaking up the lives of these two empty nesters. Greg is completely smitten with the pooch who showers him with unconditional love, and Kate is adamantly against this unkempt disruption in their lives.

Conveniently, Gurney lets us hear Sylvia’s thoughts, and when she speaks, Greg and Kate have no difficulty understanding her. It is a lazy theatrical convention, but the basis for much of the play’s humor, so just accept it.

The success of a production of Sylvia depends on the actress in the title role, and Jacqueline Laggy does an adequate, but unexceptional job. Amusing early on, with her flea-scratching and other doggy moves, she fails to build an arc for the character, so the performance grows repetitious. Still, you can see why Greg has become so enamored of Sylvia.

As Greg, Garsson is kind of a puppy doggish schnook. Patti Gardner, the cast’s only Equity performer, makes more of Kate’s one-note exasperation that is there on the page. She is a standout in an offbeat musical theater moment, when the three leading characters break into a rendition of Cole Porter’s Ev’ry Time We Say Goodbye.

Genie Croft directs the production effectively, making good use of Sean McClelland’s attractive two-level set. Still, the Theatre Guild show leaves a gnawing impression that there is a funnier play lurking within Sylvia than the company fetches. 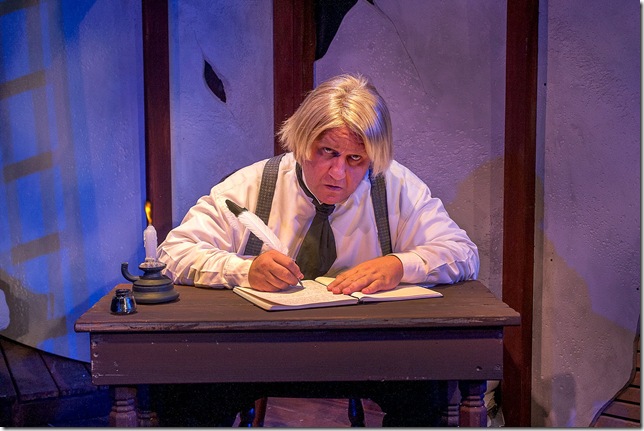 It is possible that Oscar-winning actor and occasional writer Geoffrey Rush signed on to help David Holman and Neil Armfield adapt Russian Nikolai Gogol’s short story of a lowly bureaucrat drifting into madness for the tale’s caustic social message. But it is more likely that Rush became involved because he recognized the theatrical potential in playing the central character.

For that is how things play out at Plantation’s Mosaic Theatre, which imports The Diary of a Madman to launch its 12th season. Yes, there is a potent satirical point to this portrait of a lackey scribbling his way to insanity, but it is overshadowed by the tour de force performance by the estimable Ken Clement as ninth-grade civil servant Poprishchin, a man who is wildly entertaining even as he loses his grip on reality.

The two-act, two-hour play features occasional appearances by the porcelain-skinned Betsy Graver as three different characters Poprishchin’s life, both real and imagined. But for the most part, The Diary is an absurdist monologue, with Clement masterfully delivering gobs of gibberish as he scrawls his life experience in his personal journal.

Like many underlings, Poprishchin feels deeply underappreciated. He is, after all, the only minor functionary able to maintain the boss’s quill pens. Why he is not sufficiently recognized for this skill is a matter of great bitterness to him. We take in the character’s outpourings of increasingly frantic bile, but over time we find ourselves more interested in Clement’s rants than what he is ranting.

Still, it is a hypnotic performance arc that Clement and director Richard Jay Simon have charted. It leads us through a series of blackout sketches to a sobering conclusion, in which madness is no joke. From our 21st-century perspective, this portrait of a mentally deranged worker ant cannot have the surprise it much have had in Gogol’s time, but theatrically it has plenty of dramatic punch.

That impact is aided by the Mosaic design team, including Douglas Grinn, who crafts Poprishchin’s dilapidated quarters, K. Blair Brown and her threadbare, moth-eaten costumes, and John Hall, whose lighting charts the shadows of Poprishchin’s descent. In all, this is a Diary worth unlocking and peering into its comic abyss. 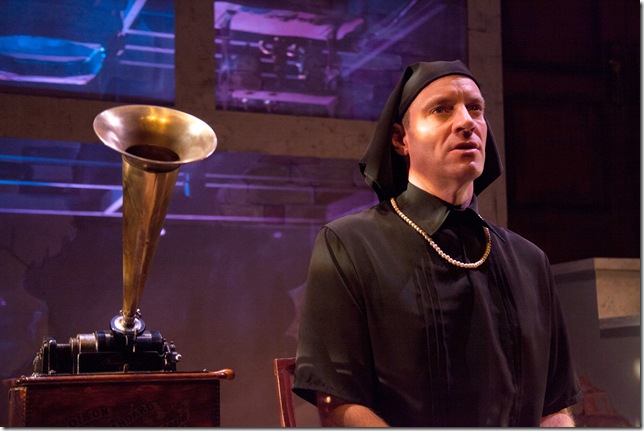 Most of us have endured some hardships in the long economic downturn we are digging out of, but surely they pale next to the survival saga of Charlotte von Mahlsdorf, the subject of the one-man Pulitzer Prize and Tony Award-winning play I Am My Own Wife.

Now on at Miami’s Arsht Center in a Zoetic Stage production featuring Tom Wahl as von Mahlsdorf and another 30 characters of so, it is an evening built solidly on first-rate writing and a superb performance.

In the early 1990s, soon after the Berlin Wall fell, playwright Doug Wright (Quills) became fascinated with von Mahlsdorf’s history and persuaded her to sit for a series of interviews on how she managed to outsmart ― or at least outlast ― the Nazi scourge as well as her East German Communist oppressors. It would be an achievement for any woman, let alone one who came into the world as a guy, one Lothar Berfelde, and then defied conventions by becoming transgendered and living his/her adult life as a woman.

Wright sensed he had a powerful theatrical subject, but he was stymied for a way to tell it effectively until he injected himself into the play. Sharing his artistic frustrations with his audiences, he becomes a stand-in for them on the bumpy road to discovery.

In addition to von Mahlsdorf and Wright, Wahl crowds the Arsht Carnival Studio Theater stage with such impersonations as Charlotte’s favorite aunt, who encourages the child’s gender curiosity, the father Charlotte killed while a youngster, a fellow antiques collector with a similar affection for gramophones, ornate clocks and furniture, assorted Nazis and members of the Stasi, the East German secret police and others.

Wahl immerses himself in these characterizations, but none more fully than Charlotte. Wearing a severe black dress, a string of pearls, orthopedic shoes and a black kerchief on his skull, he is the picture of grandmotherly demeanor, demure until he opens his mouth and stories of suffered brutality pour out.

Zoetic makes good use of the Arsht Studio space, imposing a traditional proscenium set-up on which Michael McKeever has designed a see-through scenic representation of Charlotte’s home/museum, a series of memory box treasures. It is always difficult knowing where the credit belongs for a one-person play between the performer and director, but both Wahl and his collaborator, Stuart Meltzer, have rendered this exceptional play with all of its considerable impact.

Film: Just in time with the opening of movie theaters in Palm Beach County comes the season’s most … END_OF_DOCUMENT_TOKEN_TO_BE_REPLACED

Music: The very last concert Franz Joseph Haydn attended in his life was in March 1808, about a year … END_OF_DOCUMENT_TOKEN_TO_BE_REPLACED