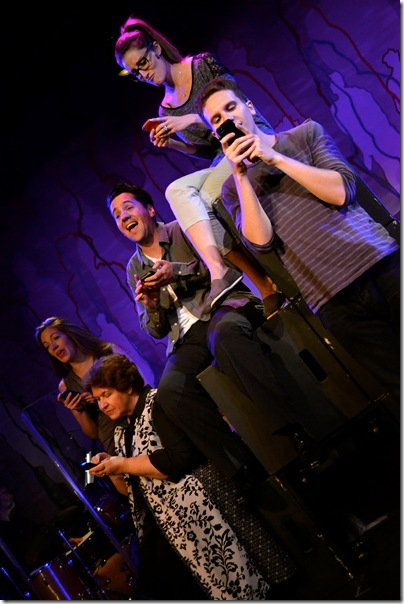 For more than 25 years, Lou Tyrrell has been discovering and showcasing new, young playwrights, developing their work for productions in South Florida and perhaps beyond.

While the industry already knows Daniel Maté — the recipient of this year’s Kleban Prize for most promising new lyricist and other awards — it is Tyrrell who has given Maté his first fully staged professional production. But judging from the abundant quality of the song cycle in The Longing and the Short of It, it is inevitable Maté’s work will become widely known and acclaimed.

The show makes a fine introduction to Maté’s words and music, being a collection of 23 eclectic numbers, many in a jazzy idiom and almost all featuring brash, contemporary, conversational lyrics, rich with wordplay, pop references and unexpected, often internal, rhymes. Lean in, open your ears and savor his smart-mouthed look at the difficulties of making lasting human connections in today’s world.

Maté’s humor is welcome, since most of his character’s stories — each a self-contained playlet — are so downbeat. Pain oozes throughout much of the show, as does Maté’s talent. These do not seem to be people you want to spend an evening with, yet you probably will find yourself identifying with their woes.

Director Max Friedman has a nimble company of six performers, divided into pairs of 20-somethings, 30-ish folks and a couple representing the 50s, though ultimately little is made of the age differences or the pairings. A standout in the cast is Elizabeth Dimon, either because she was dealt two of the better solos (Starting S..t With You and When I Get Enlightened) or she delivers them so well. Also above par are Broadway veteran John Herrera, the slyly comic Henry Gainza (negotiating the shoals of a first encounter on We Don’t Have to Date) and the throaty, bespectacled Alix Paige who, among other things, takes the leads on a hip throwaway number about Facebook.

But make no mistake, the star of the evening is Maté, even if he remains offstage. He may not be optimistic about the state of relationships, but he represents a reason to feel good about the future of the musical theater. And you can say you saw his work first in Delray Beach. 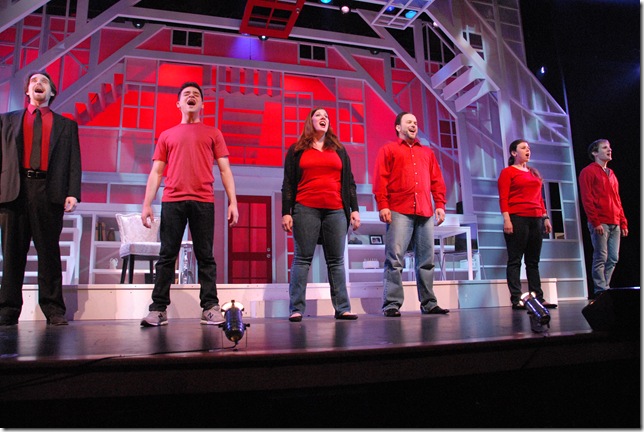 So many South Florida theater companies have talked about becoming bi-county, having a second space to move successful productions while exposing their work to an entirely new audience. Usually, that idea ends in the talking stage, but scrappy Slow Burn Theatre Company has gone ahead and done it.

This week begins its ongoing relationship with the Aventura Arts & Cultural Center, which presents the group’s solid rendering of the 2010 Pulitzer Prize-winning musical Next to Normal, every bit as edgy and unconventional as the rest of its offerings during Slow Burn’s first four years.

With the show, Miami-Dade County theatergoers get their first exposure to the work of director-choreographer Patrick Fitzwater, who does not flinch at the dark story of the suburban Goodmans, who grapple with their bi-polar housewife and mother, Diana.

Book writer and lyricist Brian Yorkey takes us through the pill-pushing obsession that is today’s mental healthcare, through to the other extreme of electro-convulsive therapy, surely a first in the annals of musical theater. He and composer Tom Kitt collaborate on a driving rock score, ranging from the opening glimpse of the family’s morning routine (Just Another Day) to son Gabe’s cry for attention (I’m Alive) to several of Diana’s manic-depressive super-charged arias.

As Diana, Sharyn Peoples has the vocal chops, but she does not dominate the production as others in the role have. Maybe that is Fitzwater’s vision of the show, a more ensemble piece that allows Matthew Korinko as Diana’s stressed-out but caring husband Dan, and Anne Chamberlain and Bruno Vida as her teenage kids, to make a more indelible impression. Certainly the show and Slow Burn’s take on it are memorable, as is Sean McClelland’s scenic design, featuring upside-down stairs, horizontal doors and other divergences from reality in the style of M.C. Esher. 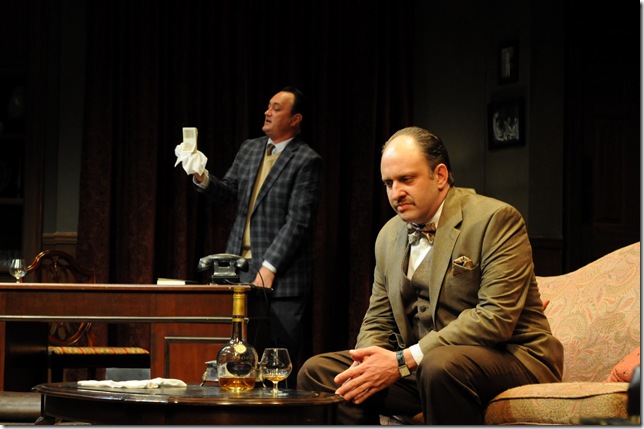 No theater company in the region has been as successful lately as the Maltz Jupiter Theatre. It swept the Carbonell Awards in musical categories earlier this year, it has set a new record for its subscriptions this season, and it just completed an impressive expansion project that enlarges its lobby and creates a new premium seating area and lounge.

Unfortunately, it also stubbed its toe opening its season with a 60-year-old thriller chestnut, Dial ‘M’ for Murder.

Written by Frederick Knott (who later would score big with Wait Until Dark,) Dial ‘M’ opened on Broadway when television — a medium that would make such stage crime yarns all but obsolete — was becoming popular in homes. Maybe audiences had more patience back then, but it is hard to deny that for today’s theatergoers, the play comes off as needlessly wordy and possesses too many plot twists for its own good.

Dial ‘M’ — do young people even know what a dial telephone is? — concerns Tony, a cash-strapped former tennis pro who tries to pull off a perfect murder, scheming against his unfaithful, wealthy wife Margot. Naturally, his plans go awry, as Margot manages to stab her would-be killer with a pair of scissors, and Tony has to think on his feet, improvising to keep his alibi from disintegrating.

Fans of TV police procedurals are bound to be ahead of unraveling events, but at least they will be diverted by Colin McPhillamy as Inspector Hubbard, a precursor to Lt. Columbo, crumpled raincoat and all, a master detective who always has just one more question. McPhillamy (seen in Dramaworks’ Copenhagen and Pitmen Painters) affects the breezy, winking style this production could have used a lot more of, while the rest of the cast— including local mainstays Todd Allen Durkin, Jim Ballard and Gregg Weiner — come off as unpersuasively wooden.

And in a pointless bit of name-dropping, the Maltz bills the show as Alfred Hitchcock’s Dial ‘M’ for Murder, simply because he directed the 1954 movie version. Still, director J. Barry Lewis devises the best laugh of the evening as the rotund master of suspense makes his signature cameo appearance in the show.

Film: Playwright August Wilson began his chronicle of the African-American experience throughout the … END_OF_DOCUMENT_TOKEN_TO_BE_REPLACED

Film: Just in time with the opening of movie theaters in Palm Beach County comes the season’s most … END_OF_DOCUMENT_TOKEN_TO_BE_REPLACED

Music: The very last concert Franz Joseph Haydn attended in his life was in March 1808, about a year … END_OF_DOCUMENT_TOKEN_TO_BE_REPLACED