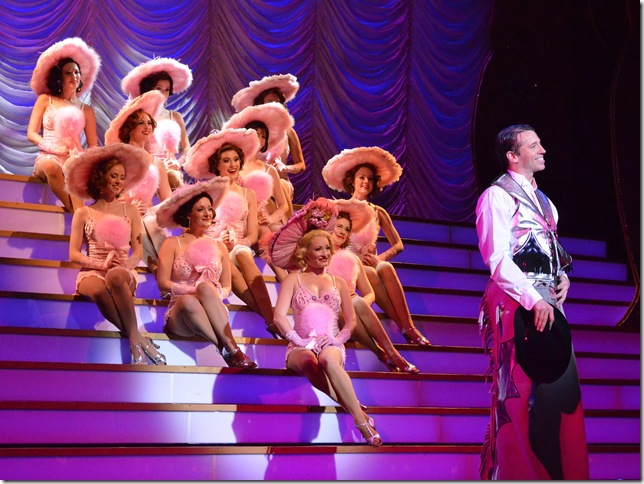 If I were programming the Maltz Jupiter Theatre, I would also be looking for vehicles for the dynamic Matt Loehr, who has earned Carbonell Awards for each of his three previous appearances there (Crazy for You, Hello, Dolly!, The Music Man).

While he is too high-energy to be an ideal fit to play cowboy-humorist-philosopher Will Rogers, the laconic “poet lariat” of the nation, he is still the reason to see the Maltz’s lavish production of the underwritten yet Tony Award-winning The Will Rogers Follies: A Life in Revue.

The show reunites Loehr with director Mark Martino and choreographer Shea Sullivan, who do their best to distract us from the fact that Rogers’s life had little drama, certainly not enough to build an evening’s entertainment around.

Book writer Peter Stone tries hard, conceiving the biography as if it were an extravaganza by Florenz Ziegfeld. The impresario was never much concerned with facts, you see, and if Rogers’s first meeting with his bride-to-be Betty seems insufficiently interesting, he blithely relocates it from prosaic Oologah, Okla., to the surface of the moon. And so it goes, anything to distract Ziegfeld’s audience – and the Maltz Jupiter’s – from realizing that there is no there there in the show.

Still, Shea understands the appeal of tap dancing and Loehr excels at it, so in this production Rogers is a tapper, OK? Believe me, you do not want to argue with that unauthentic decision. She also has 10 leggy chorus girls at her disposal, who wow us with the knockout opening number, “Will-A-Mania,” before Loehr ever steps onstage. It is topped only by a clever bit of choreography, “Favorite Son,” an intricate, high-speed game of seated pattycake. You will probably notice that  neither sequence means much, but they are both very enjoyable viewing.

The songwriting team of Cy Coleman, Betty Comden and Adolph Green — all urban sophisticates — was also an odd choice for this assignment. They do a professional job with the score, but it seems unlikely that you will be able to recall any of it the following morning.

But go to see Loehr, who is exceedingly talented and charismatic. He even learned a few rope tricks — Rogers’s forte — messing up just enough to convince us that his lasso is legitimate. Laura Hodos is very welcome as Rogers’s wife, even if her character is largely an anti-show biz scold. Elise Kinnon is attractive eye candy as the lead chorus girl designated as Ziegfeld’s Favorite and James Young is a grumpy delight as Clem, Rogers’s dad.

Design-wise, the Maltz has overdone itself. Paul Tate dePoo III’s set is dominated by a stage-wide staircase, lit with an ever-changing rainbow of light-emitting diodes by Paul Black. Best of all, though, are Gail Baldoni’s “Follies” costumes, even if — or maybe because — the chorus’s wardrobe is rather scanty.

If only the show were worthy of such visual flair. 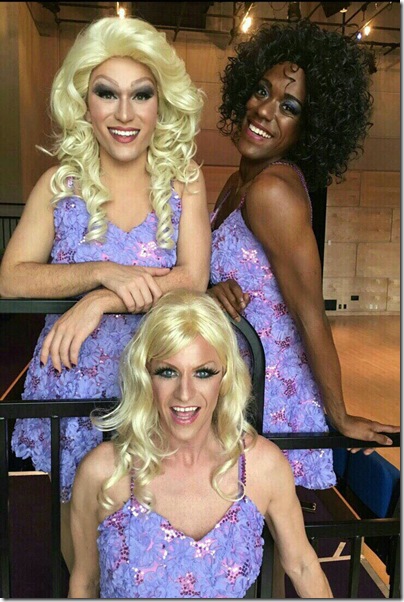 My first encounter with Diva Diaries was in 2003, when a young Andrew Kato and his writing partner John Mercurio brought their soap opera drag show to the Broward Center’s Amaturo Theater. It seemed a worthy start for a project that clearly could use further development.

Flash forward to 2016, where Kato is now the producing artistic director of the Maltz Jupiter Theatre and Mercurio has written several other musicals, including the acclaimed Academy, but not that one breakthrough commercial success that would bring him the attention he deserves. And while Diva Diaries had received several productions in those intervening years — and presumably several more rewrites — a new encounter back at the Broward Center suggests that the show is still not quite ready for prime time.

The show, written by Kato with real-life drag queen Jem Jender, is a cross between La Cage aux Folles and Follies, with a little Priscilla, Queen of the Desert thrown in too. It takes place on the final performance of a trio of cross-dressing divas of advanced age — Cleareen (Brian Padgett), Damsel (Johnny Butler) and Randee (Jason McCollum) — as the club where they have toiled for decades, Pandora’s Box, is about to meet the wrecking ball.

As they wait to go onstage, they reminisce, relive old resentments, nostalgically and ruefully sift through their pasts, as they recall their former, younger selves who materialize — Young Cleareen (David Vogel), Young Damsel (Keagan Tanner), Young Randee (Ryan Brown) — and run through some of their old routines. No longer lean or spry, the older trio faces an uncertain future, but for this one night, they do their best to avoid dire thoughts of what lies ahead for them.

If the idea is hardly original, it is emotionally potent and Mercurio has a good ear for the disco sound. If the impression left by this production is that his music dominates over his lyrics, that is due in part to the singers’ diction woes and the errant mix between their voices and the pre-recorded accompaniment at the already acoustically dubious Abdo New River Room.

There is much to like in Diva Diaries, but this production is hardly the definitive showcase for the material that its authors are seeking. 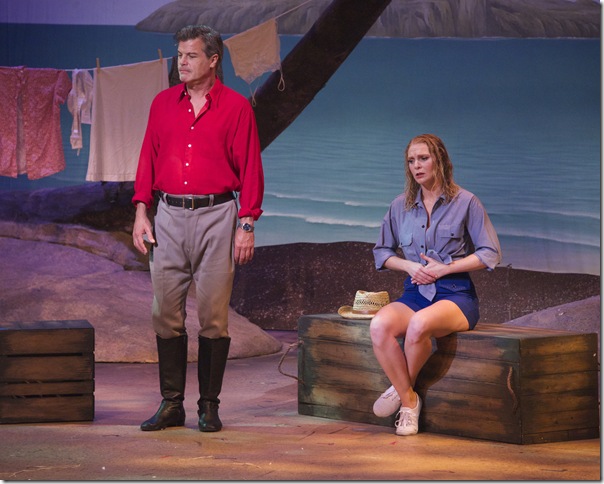 Richard Rodgers and Oscar Hammerstein II brought the musical into the modern era, bolstering the form dramatically and investing it with serious themes like racial prejudice, without stinting on the romance or lushly melodic songs.

All of their achievements are much in evidence in their third collaboration, 1949’s South Pacific, now onstage at Boca Raton’s Wick Theatre. As the company’s managing executive producer has often announced, this show is the most requested in audience polls. And this well-sung, traditional presentation is likely to satisfy that understandable preference.

Both the romance and negative bias are evident in the relationship between French plantation owner Emile De Becque (Nat Chandler) and a self-described “hick from the sticks,” Navy nurse Nellie Forbush (Adrienne Hick). She falls in love with him, but balks when she learns that he produced two children with a Polynesian woman.

And in the formulaic secondary love story, Princeton-educated lieutenant Joe Cable (Marc Koeck) is smitten by an island girl, Liat (Jen Chia), but his prejudices get in the way of their happiness together.

The show is based on James Michener’s Pulitzer-winning Tales of the South Pacific, adapted by Hammerstein and original director, Joshua Logan. There is plenty of plot, much of it crammed into the second act as World War II rages — offstage. Much has changed in the efficiency of storytelling in musicals in the 66 years since South Pacific was written, so even though director Norb Joerder moves matters along well, the enchanted evening still clocks in at an often sluggish three hours.

Still, those who voted for the show probably wanted to hear the score, full of songs now thought of as classic standards. Chandler caresses such ballads as “Some Enchanted Evening” and “This Nearly Was Mine.” The bubbly Hick handles boisterous numbers like “A Wonderful Guy” and “Honey Bun” with verve. The entrepreneurial Bloody Mary (Amy Jo Phillips) beautifully evokes the mystery of “Bali Hai.” and Koeck delivers the intended gut-punch of “You’ve Got to Be Carefully Taught.”

Josieu Jean projections are becoming a Wick signature as his location-setting animated visuals demonstrate. Unfortunately, so is the pre-recorded musical accompaniment, which prevents the spontaneity of live performance.

Film: Playwright August Wilson began his chronicle of the African-American experience throughout the … END_OF_DOCUMENT_TOKEN_TO_BE_REPLACED

Film: Just in time with the opening of movie theaters in Palm Beach County comes the season’s most … END_OF_DOCUMENT_TOKEN_TO_BE_REPLACED

Music: The very last concert Franz Joseph Haydn attended in his life was in March 1808, about a year … END_OF_DOCUMENT_TOKEN_TO_BE_REPLACED