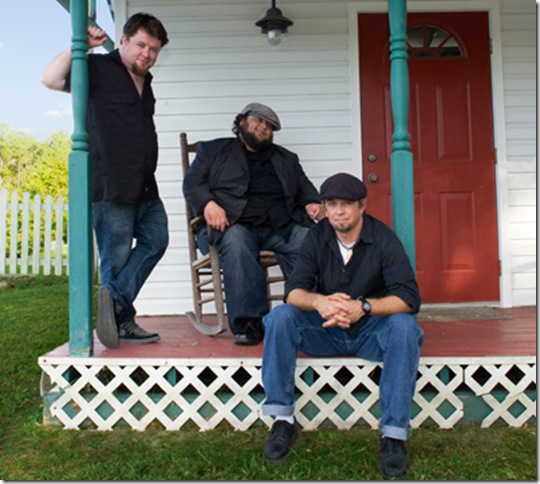 Bandleaders in general, and blues bandleaders in particular, are notorious lone wolves — stereotypical alpha males who often seek stardom by being songwriters, lead vocalists and their band’s primary soloists and dominating the spotlight.

So how is it that three of them, all rising young blues stars with their own bands, combined forces to create a regional all-star group? The answer lies in the name of that group, Southern Hospitality (www.southernhospitalityband.com.)

Southern Hospitality released its debut CD Easy Livin’ — produced by renowned blues vocalist-guitarist Tab Benoit and recorded at his Benoit’s Whiskey Bayou Studio in Louisiana — on the heralded blues label Blind Pig Records and recently returned from a most unusual and inclement second tour of Europe.

“It was cool,” Soars said in an unintended understatement. “Most of it was through Norway and Germany, and the last four days involved a flight four hours north to a little island called Longyearbyen, north of Oslo and close to Iceland, for the Dark Season Blues Festival. It’s about as close to the North Pole as you can fly, and the temperature was 40-below zero. It’s covered in snow and ice, it looks like you’re on the moon, and there’s 3,000 polar bears on the island.

“But there’s also 2,000 people who live there to do mining and scientific research, and they have this festival before it goes dark 24/7 for three months,” Soars continued. “The audiences, like most Europeans, were very attentive, more so than American audiences. And there were a lot of bands from over there that played the blues very well.”

The seeds for Southern Hospitality were sown in July of 2011, when the three bandleaders were playing a Florida blues festival with their own acts. An impromptu post-festival jam inspired the South Florida Blues Society to approach the trio about playing its Legendary Rhythm & Blues Cruise pre-party.

Fowler already was entertaining thoughts about putting such a side group together with Soars, as the two had become friends and mutual admirers, and it was Soars who thought of Wainwright as a good fit after their several jams together.

“My own band is a trio with guitar, bass and drums,” Soars said. “With Southern Hospitality, there’s all that, plus another guitar and keyboards, and we’re doing all these vocal harmonies, so it’s different…. We trade off lead vocals, and there are even some tunes that each of us sings parts of. And we all influence each other, which sets this band further apart from our solo projects.”

The quintet’s debut performance was an opening slot for iconic blues guitarist Buddy Guy at the Heritage Music Blues Festival in Wheeling, W.Va., in August of 2011. And the audience reaction signaled to the new group, which its producer Benoit calls “the future of roots music,” something special had occurred.

“The response was unbelievable,” Soars said. “It was really the catalyst to move this band forward. We hadn’t even had time to rehearse beforehand. We all just flew in on the day of the show from different places and sat backstage and patched together a set list. And a magical thing happened. We were having so much fun, and vibing off of each other, and the people there noticed it and got into it just as much as we were. Our second CD may be a live recording from when we play that same festival next year.”

The contrasts within Southern Hospitality are what give the edge to its otherwise kindred spirits. Fowler and Wainwright both have gospel-tinged, soulful, clean-toned singing voices, while Soars is a growler. And the keyboardist adds both textural electric lines and acoustic piano parts that recently earned him a second consecutive nomination from the Blues Foundation for the Pinetop Perkins Award as best blues pianist.

Even the two guitarists have more differences than similarities. Sure, they both play electric and use a slide, but Soars usually does the latter on a two-string cigar box guitar that he customized with his brother. In 2009, Soars’ band beat out competition from around the world to win the Blues Foundation’s International Blues Challenge in Memphis, and he took home its Albert King Award as best guitarist, to boot.

Soars developed his unorthodox guitar style by cutting his teeth on metallic rock in the ’90s with area bands Raped Ape, Paingod and Divine Empire, and he still plays occasional solo and duo shows of the challenging gypsy-jazz material that has confounded guitarists since Django Reinhardt wowed crowds with it in the World War II era.

Fowler’s specialty instruments are the dobro and lap steel guitar, and he was the bandleader who already was a Blind Pig Records artist. He primarily brings a country influence to the blues on his multiple axes.

“We’re all pretty stylistically diverse,” Soars said. “Victor’s rooted in the blues tradition, but he also used to sing for an Alice in Chains grunge tribute band. Damon is into the swampy blues vibe, but he loves Hank Williams and Willie Nelson and keeps turning me on to great country guitarists I’d never heard before.”

“Damon and J.P. are definitely different stylists,” Peet added. “But they complement each other so well that you almost don’t notice. It’s seamless. And they’re definitely influencing each other. I’m constantly hearing Damon play something onstage that I can tell was J.P.-influenced, and vice versa. And Victor is versatile enough to play any keyboard. If a venue has a grand piano, a Hammond organ or a synthesizer, he’s all over it, with cool Fender Rhodes electric piano and Wurlitzer organ sounds, as well.”

Rhythm sections tend to get overlooked, yet Peet has transformed from a recognizable South Florida freelance drummer into one of the area’s busiest international-touring drummers, with both Soars and Southern Hospitality, during the past five years — all as the result of his impeccable feel, timing, accents and musicality.

“Chris has been in my trio for a long time, and Damon had been playing with Chuck Riley for a long time in his own band, so it made sense to bring them both in. And Chris plays great with Chuck, who we call ‘Chuck Dunn,’” Soars said.

The reference is to late bass great Donald “Duck” Dunn, who earned multiple Grammy Awards with Booker T. and the MG’s and was the wisecracking, pipe-smoking bassist in the Blues Brothers films.

“Playing with Chuck is like riding on a magic carpet,” Peet said. “From our first downbeat together, it was like trying on a comfortable pair of shoes. It was actually like that with everyone in the band.”

“I brought in the framework for the tune ‘Southern Livin’,’ and Damon and Victor each had material, as well,” Soars said. “But we wrote some of the songs together while in the studio, and created some of my favorite material on the CD. And Tab helped us arrange some of it, especially the vocal harmonies.”

“It was a great experience,” Peet agreed. “We’d stay up all night recording, getting something started at 2 a.m., then realize through our excitement that it was 9 a.m. and we needed to try to get some sleep.”

Soars said he will send the finished recording to Blind Pig Records for consideration but is leaning toward releasing it independently like his previous two.

“I like doing the independent thing,” he said. “Being on a label like Blind Pig provides an instant seal of approval to a lot of people, which is great. But there are hardly any record stores anymore, so you don’t need a label for distribution like you used to. Even most Blind Pig artists are selling 80 to 90 percent of their CDs from the stage.”

Like Fowler and Wainwright, Soars admits Southern Hospitality has helped elevate the recognition and stature of his solo project, part of the plan in the first place. But there’s a flipside.

“It’s helped, but it can also be a distraction,” Soars said. “I get to play in front of a lot of people that I wouldn’t have been able to otherwise but trying to arrange all of the schedules with our three bands and all be available for Southern Hospitality shows can get pretty complicated.”

“Oh no,” Soars laughed. “We work around it. As problems go, that isn’t a bad one to have.”

Film: Just in time with the opening of movie theaters in Palm Beach County comes the season’s most … END_OF_DOCUMENT_TOKEN_TO_BE_REPLACED

Music: The very last concert Franz Joseph Haydn attended in his life was in March 1808, about a year … END_OF_DOCUMENT_TOKEN_TO_BE_REPLACED