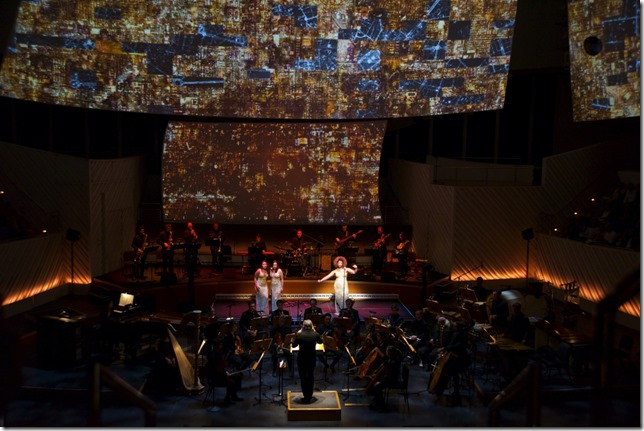 Michael Tilson Thomas conducts Four Preludes on Playthings of the Wind at the New World Center on Saturday. (Photo by Gregory Reed)

When the music had finished and the audience in the New World Center had risen to its collective feet, Michael Tilson Thomas knelt down on one knee and kissed the garment of his soloist, soprano Measha Brueggergosman.

And well he might: Brueggergosman’s confident, brassy, powerful performance went a long way to making a persuasive world premiere Saturday night of his new work, Four Preludes on Playthings of the Wind, a cantata set to a four-part poem by Carl Sandburg.

Tilson Thomas’s piece was one of three world premieres in a concert devoted to new pieces at the New World Center. The others were Timo Andres’s Tides and Currents, for two pianos and two percussionists, and Stereo/Blind, a short play by Lauren Yee with incidental music by Amy Beth Kirsten.

Tilson Thomas’s piece was 40 years in the making, beginning in 1976 as a reaction to the triumphalism of the American bicentennial celebrations that year. It lay dormant in the conductor’s sketchbook until last year, when he decided to finish it and present it on this program, and persuaded Brueggergosman to take on the central role.

The work is set for chamber orchestra, bar band (a nonet of trumpet, two saxes, trombone, and a rhythm section of two guitars, bass, synthesizer and drum set) and three singers, one soprano soloist and two other female backup singers. The cantata plays out in four linked sections, beginning with an orchestral prelude and then the Sandburg text, which Tilson Thomas memorably described in his notes and remarks as a “honky-tonk ‘Ozymandias.’” Like the Shelley poem, it tells of a diminished space that once was eminent.

Sandburg’s poem was published in his 1920 collection, Smoke and Steel. Aside from the still anthologized “Fog” and his most famous work, “Chicago,” Sandburg’s star has faded considerably over the past few decades, but “Four Preludes” is a strong lyric whose sentiment is particularly chilling given the disturbing state of our current national politics:

“The doors are twisted on broken hinges / Sheets of rain swish through on the wind / where the golden girls ran and the panels read: / We are the greatest city, / the greatest nation / nothing like us ever was.”

The poem was printed in the program book, and also recited by Tilson Thomas on a video before the piece began, and he made a good case for it. The piece opens with an orchestral prelude in which the motifs that will furnish the material for the rest of the cantata are first sounded. The opening section is straightforward and only lightly bluesy; there’s a melancholic austerity to the music that would make an absorbing slow movement of an orchestral work.

The first section of text continued in this vein, with Brueggergosman, clad in a long gray coat, entering to sing. Tilson Thomas’s setting and Brueggergosman’s vocalism was reminiscent of Sarah Vaughan, with Brueggergosman bringing her voice down into the bottom of her register, and giving the music a smoky, last-call feeling that was very effective. 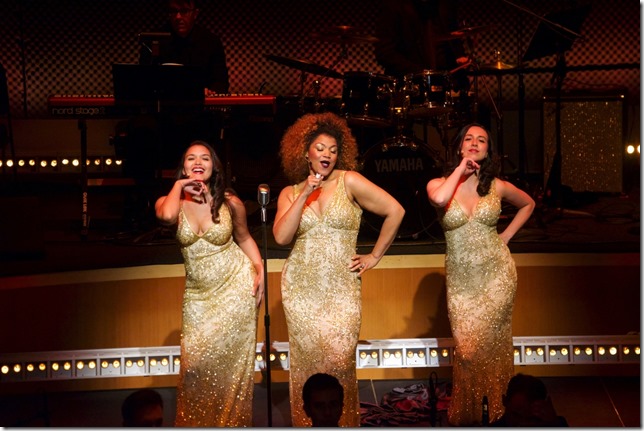 The second section, in which the celebration of the great city that was is first laid out, explodes: The bar brand cranks up in blues-rock fashion, and Brueggergosman sheds her coat to reveal the spangly Vegas-style costume underneath, at which point she was joined by soprano Mikaela Bennett and mezzo Kara Sainz, dressed in good backup-singer style just like the soloist in matching white-gold costumes (designed by Dona Granata).

Sung to a projection (by Adam Larsen) and lighting effects (by Luke Kritzeck) that emulated Sandburg’s imagery of cedar doors inlaid with golden strips, the music is big and loud, with the three women emoting in all-out closing-number fashion, which entirely fits the showy patriotism of the “greatest city, greatest nation” text.

The chamber orchestra reenters the debate as the poem darkens with imagery of rats, lizards and crows the only beings left to listen in a ruined city where the triumphalism of the past is now a shoddy memory. The music returns to the sober, clean-cut, elegantly somber classical style of the opening moments, with transformations of the initial motif moving through the orchestra and closing the third section with deep bass notes suggesting a vast emptiness.

In the final section, the soloist comes back to the hollow words of exceptionalism, and the two backup singers, who had exited, reappear on one of the New World Center stage decks (the staging of the three women was directed by James Darrah). As Brueggergosman sings the final lines deliberately and emphatically, the two women sing in counterpoint, ending with a Tilson Thomas addition to the poem: “It’s happened before, it’s happened before,” the two sing, as the music fades.

Brueggergosman’s performance was ideal for this work, and she appeared to greatly enjoy singing it. She was riveting, and the wide variety of vocal colors she is able to bring to her singing was not only impressive but probably crucial to the message of the piece. Bennett and Sainz sang with muscle and skill, and the New World fellows in the chamber orchestra were excellent. The bar band, recruited from the University of Miami, also did its part with gusto, letting the blues-rock section be exactly what it was, without attempting to make it more “classical.”

The distant spiritual father of this piece, in its reliance on a charismatic central protagonist and its willingness to marry rock to classical side by side, seems to be the Mass of Leonard Bernstein, which in its premiere five years before Tilson Thomas’s first sketches drew critical shock and opprobrium for many things, not least of them its unabashed rock-and-classical mixture. Four Preludes is a much more compact work, but it reaffirms the validity of that mashup approach.

Tilson Thomas does not approach his task with direct melodicism in mind, unlike Bernstein, but he’s aiming for something different, and there is so much going on in the piece that it doesn’t really need big tunes to work well. It’s likely that future performances of this cantata will need exceptional performers, which may limit its dispersal. But is an honest response to a poem that has stuck with the composer for some time, and deserves more hearings. 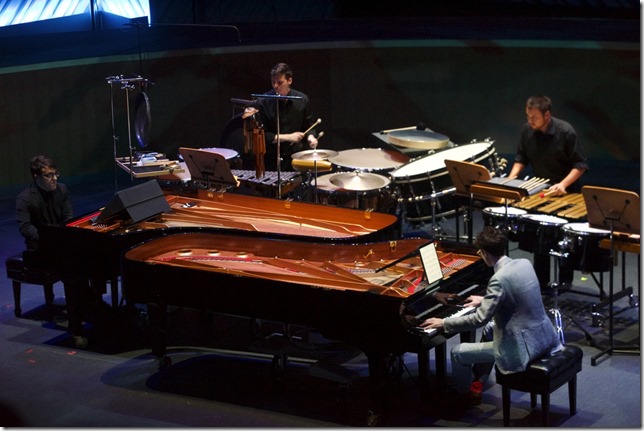 The concert opened with Tides and Currents, performed by composer Timo Andres, a young (b. 1985) Connecticut-born pianist, and John Wilson, a New World piano fellow. The expert, deft percussionists were Matthew Howard and Stephen Kehner. Andres’s title suggests water, and in his notes, he explains that the music’s texture came about from layering “hilly figures churning through the circle of fifths” on top of one another, and indeed, the music starts simply with a falling figure in one piano that gets repeated and added to by the three other performers.

This initial phrase also starts a kind of perpetual motion undulation in which these kinds of lines mingle in gentle but persistent fashion. It’s very pleasant, almost hypnotic music, and after a giant climax in the middle, it returns to a conglomeration of lines, but this time the texture is far denser, and it comes across with a rich but hemmed-in ecstasy. The audience loved this piece, cheering and shouting from the back, and while it isn’t very compelling music, its style is genial and pretty in spite of its complexity, and it seems very much music of our time.

Lauren Yee’s Stereo / Blind is the story of Annie, a young girl losing her eyesight who is forced to then rely on her other senses in order to make her way in the world. Annie, played persuasively by Diana Oh, is urged her mother (Dawn McGee) to “listen,” and eventually she realizes that she can overcome her crisis by relying on her hearing. 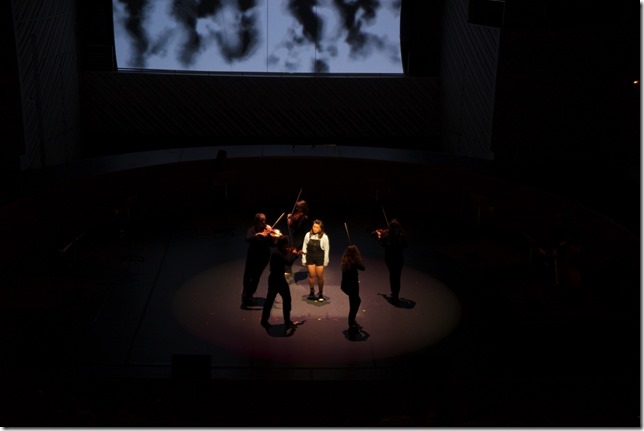 Diana Oh is surrounded by violinists in a scene from Stereo / Blind. (Photo by Gregory Reed)

This playlet is somewhat reminiscent of a classroom educational film in its you-can-do-this message, which is there at the beginning of the drama and never leaves. Amy Beth Kirsten’s music, scored for five violins and a bass, all six of whom are also actors who take part in the action. Director Mary Birnbaum puts the six musicians in a half circle at the back of the stage, leaving Oh mostly in the center as the violinists jump in and jump out with words and bits of music.

This is more play than music; Kirsten’s contribution is central to the structure of the piece, but limited in heft, with most of it being sound effects such as quick glissandi to accompany vocal outbursts. But just before the end, the sextet is on its own for a minute or so, playing a sweetly minimalist music that Kirsten should probably repurpose and expand for a string quartet or string orchestra. As effective and life-affirming as Stereo / Blind is in its current form, it would have been even more enjoyable with a couple more minutes of music.

Hats off, then, to the New World Symphony for this New Work evening, examples of which are still too infrequent in our national musical life, and the variety of approaches taken here by the three composers were fascinating. The audience Saturday night was most receptive, which suggests that if the academy wants to add another such evening in the regular season, there’d be plenty of interest from our community’s concertgoers.

Film: Just in time with the opening of movie theaters in Palm Beach County comes the season’s most … END_OF_DOCUMENT_TOKEN_TO_BE_REPLACED

Music: The very last concert Franz Joseph Haydn attended in his life was in March 1808, about a year … END_OF_DOCUMENT_TOKEN_TO_BE_REPLACED