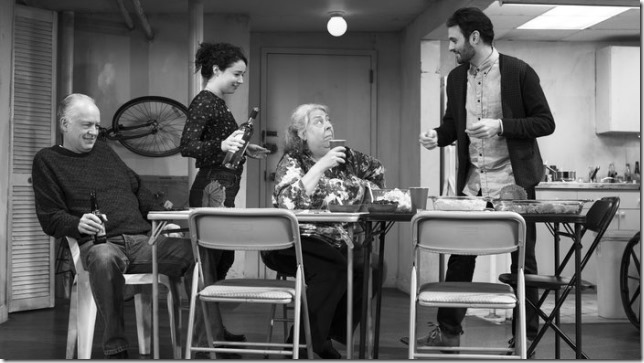 It was a relatively busy year for plays on Broadway, though it produced no widespread, runaway hit that will sustain itself much beyond the Tony Awards telecast Sunday. Still, considering the seriousness of most of these subject matters, maybe remaining open this long into the season is impressive enough.

Here is a subjective look at a handful of this season’s dramas:

The Humans: Although each member of the Blake family, a middle-class Pennsylvania clan, is facing a personal crisis in Stephen Karam’s remarkable and often opaque new play, The Humans, they do not fit easily into the catch-all label of “dysfunctional.” In between the friction that surfaces one Thanksgiving that they have warily reunited, there is a bond of affection that draws us into their world. Still, from the loud thumps coming from the apartment above to the mysterious intermittent electricity outages that plunge them into darkness, we are in the land of anxiety and metaphor.

Playwright Karam, previously known for the critically admired Speech & Debate and, more recently, Sons of the Prophet, is making his Broadway debut with this incisive production staged by Joe Mantello, a commercial transfer from Roundabout Theatre Co. The strengths of The Humans is as a mood piece, a character study and a snapshot of our lives in this precarious century where fears dominate our existence.

The Irish-American Blakes, headed by Erik (brooding Reed Birney), a maintenance man at a Catholic high school, and his judgmental wife, Deirdre (chatty Jayne Houdyshell), are visiting their daughter Bridget’s (Sarah Steele) new apartment in Chinatown. She and her boyfriend Richard (Arian Moayed) have just moved in and most of their furniture is still on a moving truck in transit from Queens. The emptiness only serves to emphasize the awkward layout of the space, though as New York apartments go, this duplex is vast enough to encourage Deirdre to overlook its spooky nature, like the odd sounds coming from the utility room and the trash compactor.

Completing the family portrait are Bridget’s sister Aimee (Cassie Beck), a lesbian lawyer with intestinal difficulties, and Erik’s aged mother Fiona (Lauren Klein), crippled with dementia. Shake them all well and savor the interaction over a brisk 95 intermissionless minutes. No, The Humans is not Long Day’s Journey into Night – in more ways than one – but as a contemporary successor of O’Neill’s, Karam and his compact comic drama will both puzzle and satisfy. 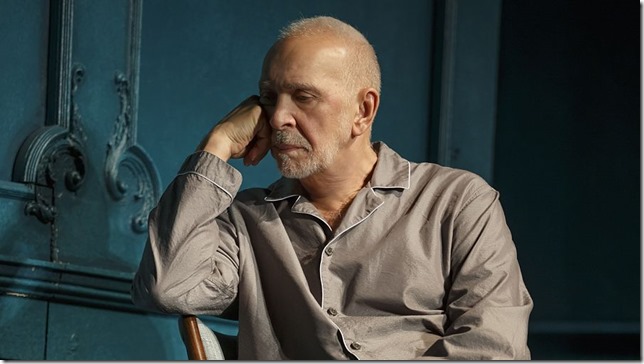 Frank Langella in The Father. (Photo by Joan Marcus)

The Father: It would be hard not to be moved by a well-written and performed drama about dementia, but Florian Zeller’s The Father sets itself apart from the growing field of works on the subject by placing us inside the disintegrating brain of Andre, a once commanding family patriarch now plagued by increasing mental confusion.

In the Manhattan Theatre Club production directed by Doug Hughes with a few theatrical tricks up his sleeve, the best thing about it is an old trick — a wrenching performance by Frank Langella as the title character, a man whose mind is literally slipping beyond his grasp.

Asking us to see the world from Andre’s perspective, French playwright Zeller — aided by a crisp translation by Christopher Hampton — challenges us to perceive the reality in Andre’s existence. For example, the play opens with a seemingly conventional scene between Andre and his grown, concerned daughter Anne (Kathryn Erbe). In the next scene, he finds that he no longer recognizes her, but neither do we, for she is now played by Kathleen McNenny.

And so it goes. Character identities morph and merge, furniture in Andre’s apartment changes position or disappears completely from scene to scene and perhaps, just perhaps, he is in an entirely different apartment than he was a scene ago. Relying on the audience’s familiarity with the conventions of theater, Zeller and Hughes then stand them on their heads.

All of this would be mere stage sleight-of-hand if it were not anchored by Langella’s deft work as the tortured Andre. One moment he is a man of strength and control and the next he registers the frightening realization that he does not comprehend a thing. It is both a towering performance and one where he shrinks before our eyes. His outbursts of anger can be volcanic, which make his whimpers of despair all the more devastating. In a tight 90 minutes, The Father brings us all to the brink of madness, and you wouldn’t want it any other way. 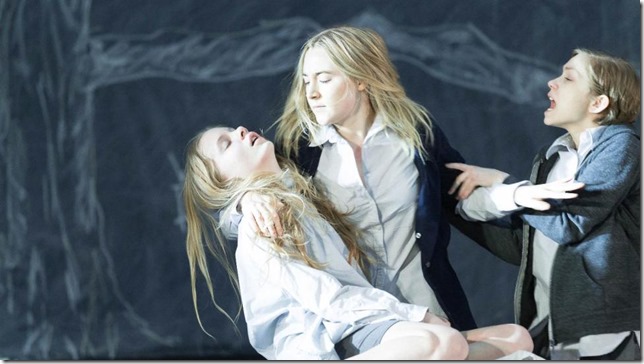 The mark of a great play is that it can survive a wrong-headed directorial concept. Arthur Miller’s The Crucible is a great play and the proof is Dutch director Ivo Van Hove’s contemporary, literal-minded interpretation.

The play looks back on the 17th-century Salem witch trials as a way to address justice gone amok and the brute force of mass hysteria. Written in 1953, the epic drama was Miller’s effort to obliquely condemn the McCarthy-era Communist witch hunt, but there are zealot targets it seems to refer to whenever the play is revived. Squint real hard and you might think that Miller — who died in 2005 — was writing about the current political furor over Donald Trump.

In any event, Van Hove and his resourceful designer Jan Versweyveld set The Crucible in a 20th-century schoolroom, with a stage-wide blackboard and chalk scribblings, occupied by female students sporting parochial uniforms. Little is made of this revisionist locale, however, beyond calling attention to the director’s hand. Worse, these girls are shown to have witch-like powers, like an ability to fly. While it is an eye-catching effect, such proof of witchcraft is surely not what Miller’s play is about.

The remarkable thing about this production, however, is that the play still works despite these directorial touches. At its center is a mean-spirited young woman, (Saoirse Ronan), who is hell-bent for revenge against a former lover (Ben Whishaw) and his wronged wife (Sophie Okonedo). To do so, she whips her schoolmates into a frenzy, claiming they have been possessed by demonic forces. Such mayhem triggers a second-act trial, with finger-pointing and mob mania in all directions.

Okonedo is particularly compelling, but other standouts include Bill Camp as a voice of reason and Ciarán Hinds as the deputy governor and presiding judge intent on convicting some witches. In the cast’s hands, The Crucible shines through, but just barely. 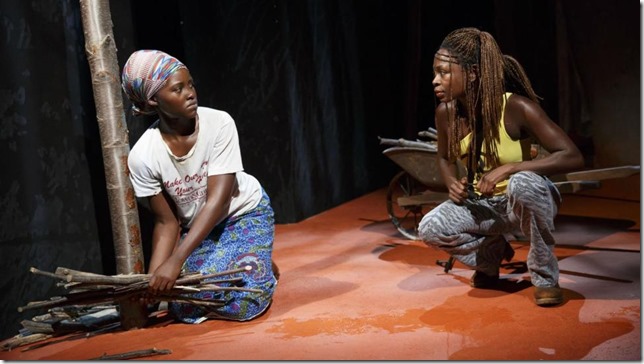 Eclipsed: The luminous face of Oscar winner Lupita Nyong’o (12 Years a Slave) is the cover image of the Playbill program for Eclipsed, the bitter drama of life amid the Liberian civil war. But this is no star vehicle for Nyong’o. Rather it is an ensemble production featuring five remarkable black actresses in a tough play that defies all expectations of what a Broadway audience wants to see.

Staunchly well-meaning, if heavy-handed, this work by Zimbabwe-raised Danai Gurira looks back on the genocide and sex slavery that were the collateral damage of combat, circa 2003, turning a spotlight on a dark page of history on the Dark Continent.

Stage-savvy Nyong’o is merely Wife #4, the latest concubine of the rebel commander who spends her days awaiting the call to fulfill her spousal duties. Imprisoned in a bullet-riddled shack, she bides her time, gossiping and carping alongside Wife #1 (Saycon Sengbloh) and #3 (Pascale Armand). They will soon be joined by a machine gun-toting Wife #2 (Zainab Jah), who urges them to join the fray, and a peach activist named Rita (Akosua Busia), who offers the opposite message, leading to a tug-of-war over Nyong’o’s character’s heart and mind.

Although the male warriors are never seen, their presence is deeply felt. And when Nyong’o leaves the relative safety of their hut, she is found, raped and conscripted into the commander’s harem. Eclipsed tells of the situation from years ago, but playwright Gurira’s and director Liesl Tommy’s implication is that little has changed and more such sexual abuse occurs routinely in Africa and beyond. It is an eye-opening cry for help, aimed at those willing to have their eyes opened.

Film: Just in time with the opening of movie theaters in Palm Beach County comes the season’s most … END_OF_DOCUMENT_TOKEN_TO_BE_REPLACED

Music: The very last concert Franz Joseph Haydn attended in his life was in March 1808, about a year … END_OF_DOCUMENT_TOKEN_TO_BE_REPLACED