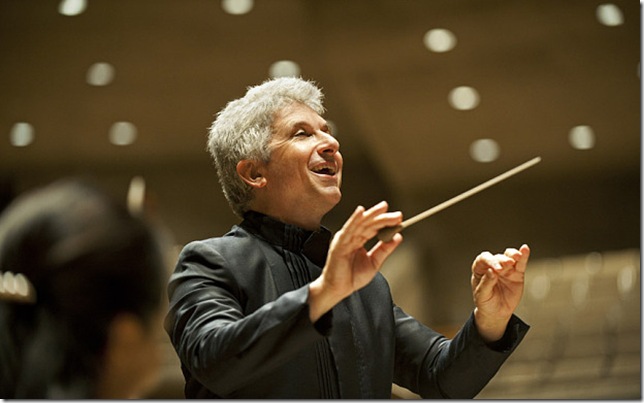 You know the season has arrived in South Florida when you start seeing cars with license plates from Canada joining you on the road.

And starting tonight, a group of accomplished visitors from the Great White North comes to West Palm Beach as the Toronto Symphony Orchestra begins its first Florida tour in five years. Joined by the 20-year-old Canadian pianist sensation Jan Lisiecki, the TSO and its music director of 12 years, Peter Oundjian, will perform two concerts at the Kravis Center, followed by single nights in Naples, Miami’s Arsht Center, Daytona Beach and Gainesville.

Five of the concerts will feature one program: Lisiecki in the Beethoven Fourth Piano Concerto (in G, Op. 58), Rimsky-Korsakov’s Scheherazade, and as a curtain-raiser, contemporary Canadian composer John Estacio’s Wondrous Light. Unique to the Kravis will be the Monday afternoon concert, which will feature Lisiecki in the Chopin First Concerto (in E minor, Op. 11) and two works by Tchaikovsky: the “Polonaise” from his opera Eugene Onegin, and his devastating Pathétique Symphony (No. 6 in B minor, Op. 74).

Leaving Ontario behind for a week in the Sunshine State is an ideally suited sojourn for the 88-member orchestra, Oundjian noted.

“I’ve always felt it was a natural thing for us to do. There is a huge Canadian population in Florida in the wintertime,” Oundjian said last week from his home in Weston, Conn. “And Florida has fantastic concert halls. You can’t drive very many places in America, from one great concert hall to another, within half an hour or an hour, like you can there.

“It’s a great place to tour, and I think audiences are very vibrant down there, because many people came from big cities where they used to go to hear a symphony orchestra,” he said.

Oundjian, who turned 60 at the end of December, began his conducting career in the mid-1990s after a celebrated tenure as first violinist of the Tokyo String Quartet. He switched to the baton after enduring repeated episodes of focal dystonia in his left hand that left him unable to play the violin as well as he had.

And that was very well indeed: Born in Toronto, he moved to England as a boy of 5, and grew up in South London. While there, he studied piano and violin, sang as a chorister in Westminster Abbey, and worked with composer Benjamin Britten. He won a gold medal for most distinguished student at the Royal College of Music, where he studied for two years, and then came back to North America to earn bachelor’s and master’s degrees at the Juilliard School beginning in 1975.

At Juilliard, he studied with Ivan Galamian, Itzhak Perlman and Dorothy DeLay, and after leaving school in 1981, joined the Tokyo String Quartet, concertizing with it for 14 years before the dystonia ended a career in which he played more than 2,000 concerts.

“I stopped because I didn’t want to embarrass myself or on stage, and didn’t want to continue to suffer playing without control. Because it’s hard enough to play the violin when you think you have control; when you know you don’t, it’s not pleasant,” he said.

He says he’s been lucky enough to be successful at a second musical career, but every now and again he’ll reacquaint himself with this old instrument.

“Sometimes I pick up the violin to know I can still sort of make a sound. It’s wonderful to make a sound on the violin, to make a beautiful, vibrant sound, to turn a phrase: It’s absolutely fantastic,” he said. “But it’s also incredible to deal with all the colors in the last movement of the Mahler Third.”

After a podium debut at New York’s Caramoor Festival in 1995, he became its artistic director in 1997 before taking the helm of the TSO in 2003. His current contract runs through 2017; he is the second Canadian native to head the orchestra in its 94-year history (he became an American citizen last year).

In recent years, the orchestra, which gave 132 concerts in the past season, has had some well-publicized money problems. In 2013, it posted a deficit of $1.3 million (in Canadian dollars), but was able to follow that with very modest surpluses in 2014 and 2015 on a budget of about $28 million.

Oundjian is optimistic about the orchestra going forward.

“I think the future looks very, very bright right now,” he said. “We’ve started to raise money on a very different level, we’ve raised awareness of the orchestra, we’re doing all kinds of different things now in terms of repertoire, and in terms of collaboration.”

Also during Oundjian’s time, the orchestra has commissioned “16 or 17” Canadian composers — including Quebec’s Jacques Hétu, who died in 2010 just weeks before Oundjian led the premiere of his Fifth Symphony — to write pieces for it, and maintains a call for Canadian scores on its website. Estacio is a leading composer with “a wonderful voice,” Oundjian said.

“And [‘Wondrous Light’] is not necessarily representative of all of his skills, because it’s an overture. It’s jovial, it’s optimistic, it’s very creative and imaginative, it’s very beautiful, and it has a lot of virtuosity,” he said. “That’s the key to it, really. It has fabulous energy, wonderful colors, and it shows off the orchestral virtuosity both in individuals in certain instruments, particularly trumpet, and also in terms of just the tightness of ensemble.

“It does make for a beautiful opening of a concert,” he said. 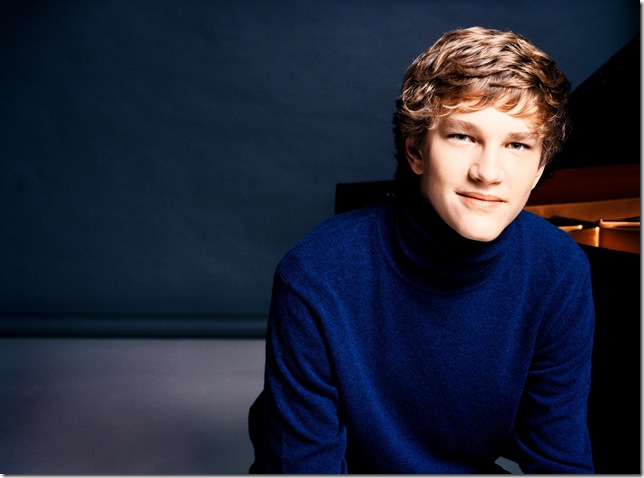 The soloist on the TSO tour, Lisiecki, is a piano prodigy born to Polish parents in Calgary. He was signed to a Deutsche Grammophon contract at 15, and his fourth disc, an all-Schumann collaboration with Antonio Pappano and Italy’s St. Cecilia Academy orchestra, contains the Piano Concerto and two rarely heard concert pieces for piano and orchestra; it will be released Friday.

Oundjian said the Beethoven and Chopin concerti are two pieces Lisiecki was eager to play.

“They work rather beautifully on our programs … Certainly, when you invite a soloist, you want them to be comfortable, to play the music that is in their hands at the time, and in their hearts at the time,” he said. “They’re also very contrasting works, with the sublime and mature aspects of the Beethoven Fourth, and that fresh, youthful longing of Chopin One.”

Oundjian has worked with Lisiecki several times previously, beginning when he was 16, and was struck by the nobility of his playing. “It was just hard to imagine that he was 16. And he’s also just the loveliest person. You kind of think it will be the ivory tower syndrome, and they won’t really know how to relate to people, and they’re only normal when they’re playing the piano,” he said, chuckling. “But Jan is just the loveliest guy. So sweet, so kind, and he has a great sense of humor. But he’s also obviously highly disciplined and extremely talented.”

The two big Russian Romantic works on the programs, Rimsky-Korsakov and Tchaikovsky, are also a study in contrasts, Oundjian said.

The Rimsky work, based on The Thousand and One Nights of Arabic folklore, is surely the composer’s best-known piece and vividly demonstrates his skill at orchestration. Oundjian points out that the melodic material returns in vastly different guises, which lends the piece its special aura.

“The magic of transformation is that it’s fresh, because you create out of one thing another. It’s a character piece … it’s all really about the imagination, the adjectives of the character,” he said, noting that every part of the orchestra is at some time in the spotlight, none more so than the concertmaster, Jonathan Crow, “an absolutely masterful violinist.”

And the Tchaikovsky Sixth, a masterwork not heard as often as its stature might suggest, may not come around as much as it should because of the shattering emotional content of its somber, tragic finale, Oundjian said.

“It’s a perfect piece, to me. It opens the door to a new kind of expression, where the music doesn’t have to end in triumph,” he said. “The challenge for us is that we love the piece so much, and every time you walk on the stage to start it … you have to give the first performance. Your energy has to be absolutely fresh. You don’t want to press the rewind button and then the play button on your life as a musician. You press the record button, and you do it the first time.” 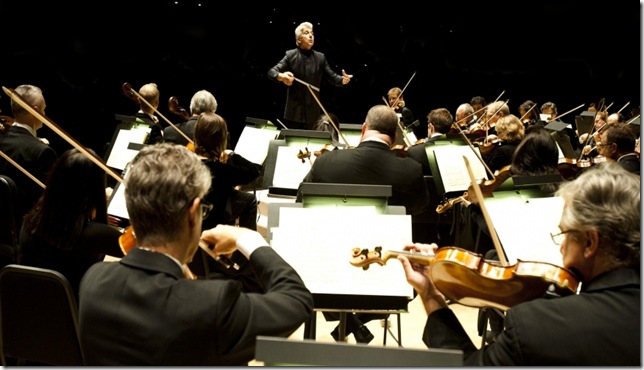 Like most arts organizations these days, the Toronto is doing whatever it can to reach new audiences, and in the coming months will feature outside-the-box partnerships with performers such as Canadian DJ Skratch Bastid.

“We always want to eliminate boundaries. To me, music is music … I’m not hugely knowledgeable about techno music or about rap, but in general I’m a big fan of all kinds of music,” Oundjian said. “We are a very open group, and we want to see what kinds of collaborations can be exciting for our listeners, and to bring in, therefore, the listeners of that particular artist to come in to hear the symphony as well.”

The focus of all that openness is to bring more people to an art form they should embrace, he said.

“The danger for classical music is an image of elitism. That is really the greatest threat,” he said. “A lot of people are afraid of it: They don’t know how to dress, they don’t know when to clap, they think they don’t belong. And we’ve worked, ever since I’ve arrived there, to do the opposite, to make everyone feel welcome and included.”

That includes letting people show their appreciation when the music moves them — as it often does at the end of something like the spectacular third-movement march of the Tchaikovsky Sixth — and not wait for an entire multi-movement work to be over.

The Toronto Symphony Orchestra appears at 8 tonight and 2 p.m. Monday at the Kravis Center, West Palm Beach, with pianist Jan Lisiecki. Tickets start at $35. Call 561-832-7469 or visit www.kravis.org. The group also appears at 8 p.m. Thursday at the Knight Concert Hall in the Adrienne Arsht Center for the Performing Arts in Miami. Tickets start at $50. Call 305-949-6722 or visit www.arshtcenter.org.

Film: Just in time with the opening of movie theaters in Palm Beach County comes the season’s most … END_OF_DOCUMENT_TOKEN_TO_BE_REPLACED

Music: The very last concert Franz Joseph Haydn attended in his life was in March 1808, about a year … END_OF_DOCUMENT_TOKEN_TO_BE_REPLACED