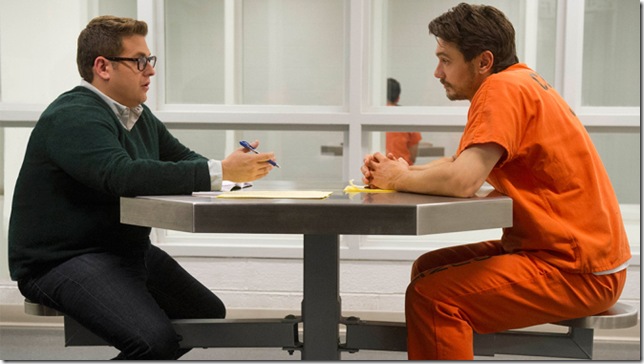 True Story is, among other things, a movie about addiction, but not to the usual addictive suspects — booze, drugs, sex, gambling. It’s about an addiction to the truth, or moreover the perception of truth, and the obsessions and compulsions that drive it.

It’s the sort of addiction to which any dedicated newshound can relate, the kind that results in sleepless nights, 80-hour workweeks and reams of research detritus tacked onto office walls. But at what point does the thrill of the scoop threaten sound judgment?

That’s the question at the core of this true-crime cautionary tale, a movie that’s as penetrating as its characters’ stares. Jonah Hill plays Mike Finkel, a celebrated investigative reporter for The New York Times whose exposé about abuse in African cocoa plantations is found to be partially fraudulent. Fired from the Times and scrambling to restore his credibility, Mike discovers a dangerous opportunity in the arrest of Christian Longo (James Franco), an Oregon man accused of murdering his wife and three children who had been using Finkel’s name.

Intrigued, Mike arranges a pretrial interview with Christian, only to find that the probable mass murderer is Finkel’s No. 1 fan. He’ll grant the disgraced reporter the exclusive rights to his story, if Mike will teach him how to write in return.

The more Mike listens to Christian’s narrative, the more he becomes invested in the man’s story, true or not. He essentially becomes Christian’s best friend, attorney, therapist and, in a sense, lover — for as Mike’s obsession with Christian amplifies, he grows cold and distant from his infinitely patient girlfriend, Jill (Felicity Jones). The movie’s concern is less Christian’s guilt or innocence and more the uneasy relationship between men whose similarities should disturb Mike rather than arouse him. True Story is not so much In Cold Blood as it is Capote.

Working from Finkel’s book of the same name, the film marks the feature-film debut of Rupert Goold, a celebrated stage director specializing in Shakespeare, and his background is imprinted on the final product — you can easily imagine True Story as a two-character chamber play. This is a muted, somber film whose central scenes are close-up interrogations in antiseptic prison walls, and its impact rests entirely on the faces of its stars. Simple editing rhythms of shot/reverse-shot haven’t felt this riveting in years.

Hill and Franco, frequent collaborators on improv-heavy, communal studio comedies, plunge from their comfort zones into hearts of darkness. Hill has a sobering respect for his character, treating him not as a certifiable fraud à la Stephen Glass or Jayson Blair but as a solid reporter who made a mistake. His wayward slip into the abyss of his subject’s mind is believable, well-intentioned and heartbreaking. Franco, never better, plays Christian as a high-functioning sociopath, wearing the implacable gaze of the possibly insane. He gets under your skin, and so does the film.

It’s hard to say whether True Story will be remembered as more than just a good movie about the journalistic condition. You could certainly make the case that the comfortably middle-class Finkel’s struggle to humanize an alleged killer is a less compelling subject than the demons that steered the increasingly rudderless Christian Longo — not to mention the victims, who arguably become the show’s buried lede. But for viewers bitten by the reporter’s bug, True Story is another important entry into a probing journalism-film canon that includes All the President’s Men, Zodiac and, unavoidably, Capote.

Film: Playwright August Wilson began his chronicle of the African-American experience throughout the … END_OF_DOCUMENT_TOKEN_TO_BE_REPLACED

Film: Just in time with the opening of movie theaters in Palm Beach County comes the season’s most … END_OF_DOCUMENT_TOKEN_TO_BE_REPLACED

Music: The very last concert Franz Joseph Haydn attended in his life was in March 1808, about a year … END_OF_DOCUMENT_TOKEN_TO_BE_REPLACED