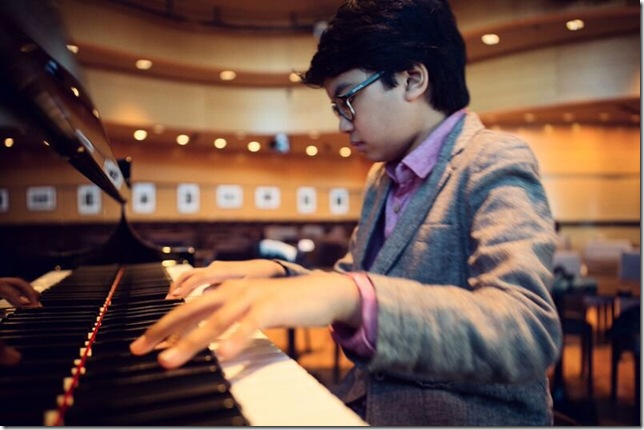 Most people who watched the venerable CBS program 60 Minutes on Jan. 3 probably weren’t blind, and didn’t tune in right in the middle of a playing segment by jazz pianist Joey Alexander.

But if those possibilities aligned, anyone listening would’ve heard a musician playing with the creativity, dexterity and improvisational skills of jazz keyboard legends from Art Tatum and Thelonious Monk to Chick Corea and Herbie Hancock.

That alone makes Alexander — who performs as part of the 10th annual Festival of the Arts Boca on Friday — special, but why was he featured and interviewed for the program by Anderson Cooper? Primarily because he’s only 12 years old. He’s also shown wowing the crowd in 2014 at Jazz at Lincoln Center’s annual gala in New York City at age 10.

If you’re rolling your eyes, you probably didn’t see this segment, and/or you’ve figuratively heard this tune before. Prodigies come and go in all musical genres, and in jazz, they tend to be pianists. Two who’ve emerged in the 21st century are 29-year-old, Soviet-born Eldar Djangirov, who started performing in the United States at age 10; released his first CD in 2001, received a Grammy nomination for his 2007 release Re-imagination, and earned a 2009 Album of the Year nod in Jazziz for his Virtue CD, and 23-year-old American Matt Savage, an autistic whiz who started his recording career before age 10, and whose latest effort is the new It’s My Request: Live at Bar Request. (Djangirov performed as part of the Festival of the Arts Boca in 2009.)

There’s a major difference, though, between these now-veteran jazz musicians and the Indonesian Alexander, who was born in the island nation of Bali. Both Djangirov and Savage entered into jazz by having to be indoctrinated into improvisation, the impromptu lifeblood of the genre, following early studies of the more exacting forms of classical music (in which improvising will cause a musician to hear echoes of a certain presidential candidate, as in “You’re fired!”).

Classical and jazz are thus more demanding than forms of popular music — to the point where the percentages of those who ascend to the pinnacles of either genre are akin to athletes who reach the top of their professions. But Alexander already knows how to keep things in perspective.

“Jazz is hard music,” he says. “You have to work really hard, but also have fun performing; that’s the most important thing.”

Still, Alexander studied neither jazz nor classical music in-depth. As detailed on 60 Minutes, parents Denny and Fara gave up on his brief classical studies once they realized his gift for improvisation. Amazingly, Alexander’s musical family (Denny plays guitar and keyboards) somehow instilled him with the innate ability to simultaneously listen, play and think on the fly, something every jazz musician seeks but only a minority master —- and only a microscopic percentage of that in childhood. Yet even Alexander admits that which is instinctive isn’t necessarily easy.

“So every time — it might be different?” Cooper asked. “It sounds really hard.”

Alexander’s parents allowed the phenom to start performing live in Bali when he was 6 years old. The closest he came to jazz lessons came at age 8, when prominent Indonesian pianist and educator Indra Lesmana allowed him to repeatedly sit next to him at the piano bench at his own Jakarta nightclub.

“He was very gifted,” Lesmana says, “and clearly had a huge potential to become a great musician.”

The 2014 Jazz at Lincoln Center performance, Alexander’s United States debut, was orchestrated by trumpeter and JALC artistic director Wynton Marsalis — perhaps the world’s best-known jazz musician and one not prone to hyperbole in his infrequent praise of other veteran musicians, let alone child performers. Yet Marsalis extended the invitation after watching YouTube clips of Alexander, and appeared seated on the piano bench next to him for part of the 60 Minutes piece as both were interviewed by Cooper.

“I’ve never heard anyone who could play like him,” Marsalis says. “And no one has heard a person who could play like him … Oh man, somebody 12 playing like that. Why? We don’t know why. I once asked Miles Davis about sound. ‘Man, how do you get the sound you get?’ He said, ‘Man, nobody knows about sound. Sound just is.’ And I think that about [Alexander’s] abilities. They are. They are.”

Those abilities made the 12-year-old the youngest performer ever at the 2015 Newport Jazz Festival, and Alexander also released his debut CD, My Favorite Things, on the Harlem-based Motema label last year. It received two Grammy nominations, one for Best Jazz Instrumental Album and one for Best Improvised Jazz Solo for Alexander’s performance on John Coltrane’s “Giant Steps.” Among several standards including the Richard Rodgers title track, there’s even an original, “Ma Blues,” that he wrote at the ripe old age of 10.

Yet prodigies are usually judged by their advanced technique and tone — but perhaps not their taste, or lack thereof — by nature. And as is often the case with Alexander, that technique and tone get displayed through flurries of notes that dazzle the listener — and more so because they’re coming from the hands of a 12-year-old than a veteran in his 20s or older. So some critics cite Alexander as, at the very least, a prospective cautionary tale.

“I’ve never really been a chops-meister,” says Bob Weinberg, the Hollywood-based veteran jazz editor and contributor to Jazziz and the Miami Herald. “To me, it’s really more about feel; what an artist has to say or communicate in terms of emotion or understanding of the world. That’s tough at any age, but before puberty?”

“He’s not a fully formed musician yet,” cautions Jason Olaine, who produced My Favorite Things. “We don’t know who he’s going to turn out to be.”

It’s possible that Alexander might turn out to be bored because his natural abilities make things too easy, and/or that the public gets bored if, at age 22, he’s still a standout pianist but no longer a prodigy — or thus the same curiosity.

Yet Alexander didn’t even break a sweat while performing Eddie Harris’ standard “Freedom Jazz Dance” last month at the 58th Annual Grammy Awards at the Staples Center in Los Angeles. And though he didn’t win a Grammy, he lost to jazz giants in guitarist John Scofield and bassist Christian McBride. And he was also, of course, the youngest Grammys nominee.

“If you listen to the way Joey Alexander plays ‘My Favorite Things,’” he says, “at one point in that piece of music, his sensibility through his left hand is almost like you’re going to church … but his right hand is playing at such a fleeting moment, there’s a traffic ticket waiting for him when he’s done. At any age, his language is pretty special. But at the age of 12, you almost think, ‘You know, I might even believe in reincarnation.’”

Film: Playwright August Wilson began his chronicle of the African-American experience throughout the … END_OF_DOCUMENT_TOKEN_TO_BE_REPLACED

Film: Just in time with the opening of movie theaters in Palm Beach County comes the season’s most … END_OF_DOCUMENT_TOKEN_TO_BE_REPLACED

Music: The very last concert Franz Joseph Haydn attended in his life was in March 1808, about a year … END_OF_DOCUMENT_TOKEN_TO_BE_REPLACED