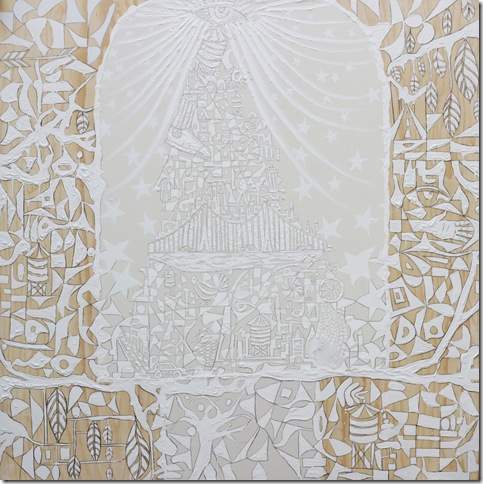 The work of artists Victor Matthews and Paolo Nicola Rossini, now on view in Transitions at the Boca Raton Museum of Art, at first glance appears dramatically different.

Yet Kathleen Goncharov, curator of exhibitions and audience engagement, who organized the show, sees a common theme in their work.

“Both artists afford the viewer a glimpse into their subconscious and their dreams and memories. Whether it’s fleeting moments, or the passage of years, they both deal with what’s transitional,” Goncharov said.

From there it came directly to Boca, where it opened to one of the largest crowds the museum has ever seen. Part of the draw was a special appearance by Matthews’ close friend, DJ John “Jellybean” Benitez, who rose to fame in the mid-’80s as Madonna’s BFF. 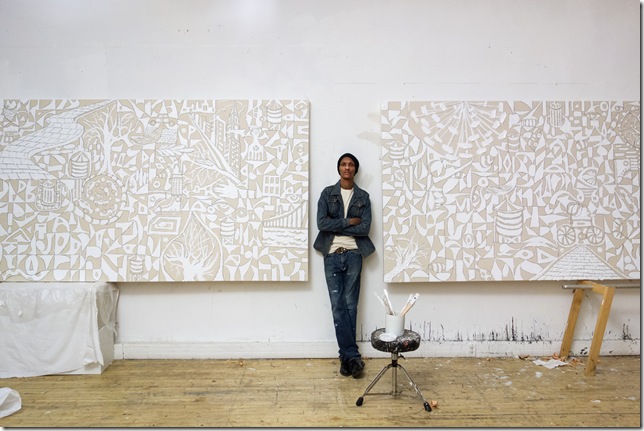 It was in the ’80s, too, that Matthews’ star began to rise as he traveled in a prestigious circle of artists that included Francesco Clemente and Jean-Michel Basquiat. There, too, is when I first met him as an aspiring teenage gallerina sneaking into the city to attend art gallery openings. I was drawn to his imagery and to his easygoing, tranquil manner.

I remember his dealer telling me that his work had just been purchased by Susan Siedelman, who directed Madonna in Desperately Seeking Susan. Though we eventually lost touch, as I went off to college, I marveled at his rise to fame and kept clippings in my scrapbook of articles about him from The New York Times.

The same easiness and likability that drew me to Matthews, over the years has also impressed a number of important collectors and celebrities. Jay-Z owns his work and Matthews counts Russell Simmons as one of his close friends and he also sits on the board of three of Simmons’ charities. Clemente, who contributed to the show’s catalog, wrote, “…Matthews is a gentle-man, both in the way he accepts the world….and in the way he embraces the narratives of his subtle sensibility, surfing, a bit dandy-like, along the crest of a gentle ripple of paint.”

Matthews’ series of grid-like white paintings featured in this show demonstrate a lively inner life. He’s got a Joyce-like, stream-of-consciousness style. He does not prepare preliminary sketches. His work goes directly from his mind to the surface of the canvas, or towards constructing his assemblages. The resulting works depict movement, whimsy and rhythm.
“I have these impulses and feelings that are in me,” he explained. “They’re hard to verbalize, but they’re in my thoughts, my dreams at night and my daydreams. I paint on the raw canvas because you can’t erase, so the lines are genuine, and you can’t predict the outcome.”

While white often symbolizes calm, for him it’s more nuanced. He said, “There are so many different tones in it.” In the same way, there are different layers beyond the surface of his narrative paintings and assemblages, which depict his personal iconography and signature style. There are the symbols of his Brooklyn childhood: water towers, bridges, bicycles and Converse sneakers. “I’ve been wearing them since I was a kid and saw Dr. J wearing them in TV commercials,” he said. 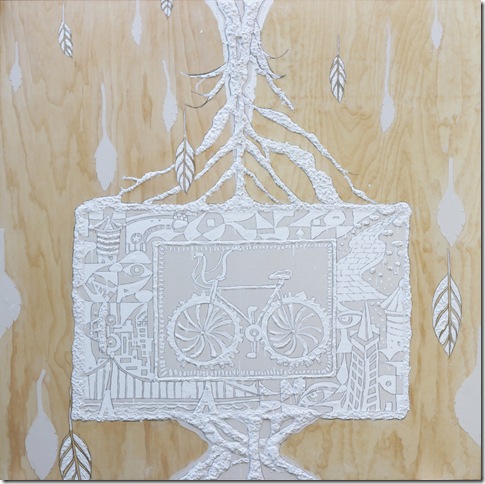 You feel the rhythm of New York City, with all its interesting micro-narratives, playing out in paintings such as, Earth Ice Frozen Cold I and Earth Ice Frozen Cold II, both made earlier this year for this exhibit. Salman Rushdie, who also contributed to the catalog, wrote, “They are ludic, affectionate dreams of New York, like portraits of an all-white Oz, with a white brick road snaking through a white metropolis…”

Yet within the city frenzy, Matthews holds onto that noteworthy inner calm. This is evident in the signature eye that appears throughout his work. The eyes evoke the Hindu “third eye,” a symbol of seeing beyond the surface, of wisdom and clarity. Then, there are also the allusions to Buddhism — the statue of the Buddha and the Shambala encircling the Tree of Life. This is an artist who, despite fame, despite celebrity, values his serenity amidst the clamoring.

This underlying calm ties into the surface of Paolo Nicola Rossini’s photographs, which are also layered and nuanced beyond their surface. That surface is mystical and enticing, beckoning the viewer into a cosmos-like world of light and color. Works, such as Shape #2 and Still Life #8 seem like the impressions of something that was once there, fleeting, transitional. 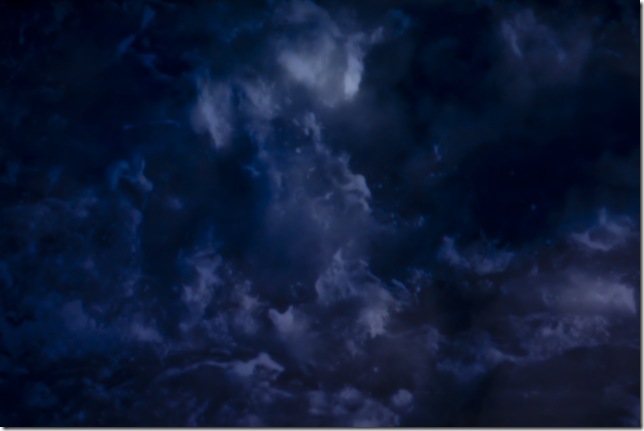 Though they might appear staged, Rossini creates these images without the aid of software. “It’s actually long-exposure pictures of movie frames. The subjects are captured in short movies with a video camera,” he said. “My process is to photograph a movie composed of various images, some of which appear longer than others, and it creates a single photo where all the elements come together in a unique alchemy.”

The underlying imagery, blurred beyond recognition, contains scenes of empty spaces, landscapes, natural elements and lights. Sometimes, there are people, but their features are not discernible and they’re merely impressions of a human presence.

In Rossini’s work, “nothing is sharply focused or defined and much is left to the viewer’s imagination,” Goncharov said. “The muted palette and subtle tonal changes create a mysterious presence whether the subject is nature, people, or cities of the world. These pictures argue that whatever we see and remember might just be a mirage.” 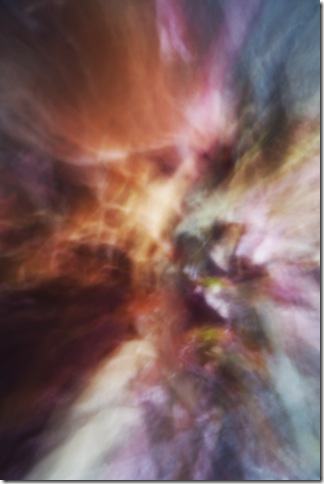 Transitions is an enticing exhibit, not only because of the individual talents of each artist, but as a result of the juxtaposition of the two. While each individually portrays their inner monologue, collectively these form an intriguing dialogue.

Matthews’ work speaks one visual language, while Rossini’s, by contrast, speaks an altogether different one, forcing further comparison and contemplation. And with the theme of the show itself, there’s also an interesting visual “transition” from one artist’s world to the other, resulting in a thoughtful journey.

Film: Playwright August Wilson began his chronicle of the African-American experience throughout the … END_OF_DOCUMENT_TOKEN_TO_BE_REPLACED

Film: Just in time with the opening of movie theaters in Palm Beach County comes the season’s most … END_OF_DOCUMENT_TOKEN_TO_BE_REPLACED

Music: The very last concert Franz Joseph Haydn attended in his life was in March 1808, about a year … END_OF_DOCUMENT_TOKEN_TO_BE_REPLACED