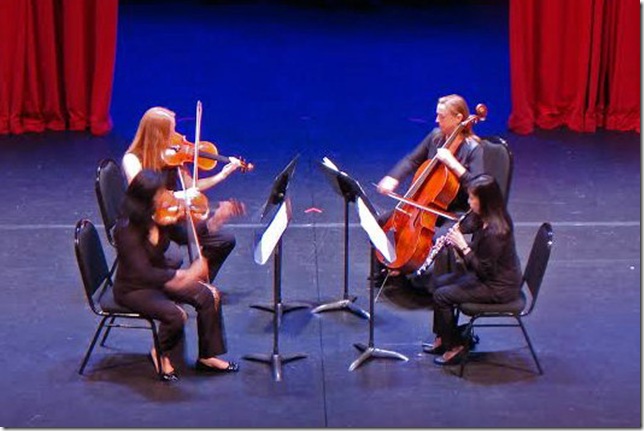 They buried Ernst von Dohnányi in Tallahassee back in 1960, and for some time afterward, it seemed like his compositions went with him.

But the great Hungarian pianist, estimable composer and Florida State University professor is enjoying more attention these days from performers. His neo-Brahmsian aesthetic was out of fashion until very recently, but audiences enjoying the thaw in classical music after the rigor of the atonalist school have found much to like in Dohnányi’s always accessible music.

One of his major chamber works, the Sextet in C for clarinet, horn and string trio and piano, was the closing work on the second weekend of concerts in the 23rd summer season of the Palm Beach Chamber Music Festival. At the concert Sunday in Delray’s Crest Theatre, the six musicians gave it a big-boned and engaging performance, if perhaps a little careful in the first two movements, but then warming up for the finale.

This sextet (Op. 37) was written in 1935, while Dohnányi was head of the Budapest Academy of Music (he later resigned rather than implement Nazi-ordered anti-Jewish rules), but it betrays no sign of the increasingly turbulent time in which it was composed. It is very conservative music that breathes the air of the old Europe, but which is constructed with immense skill and a thorough understanding of each instrument’s potentialities.

The sextet has a tricky opening, with widespread arpeggios in the cello (Susan Moyer Bergeron) and a dramatic entrance from the horn (Ellen Tomasiewicz) that sets a serious tone for the rest of the movement. Tomasiewicz’s entrance was imprecise, but she has a warm, well-rounded tone that makes a strong impression. The rest of the ensemble — clarinetist Michael Forte, violinist Dina Kostic, violist Rene Reder and pianist Lisa Leonard — played the rest of the movement with confidence, though it could have used some more late Romantic seasoning to make the music more vivid.

A stronger contrast in the two sections of the slow Intermezzo would have been welcome, too; after some sweet playing by the string trio in the opening bars, the dark march that follows in the clarinet, horn and piano was fine but a little cool, when the composer appeared to be striving for more drama.

The final two interconnected movements sounded much more relaxed, with Forte entering sunnily in the third movement and the rest of the group playing with a palpable sense of ease, especially in the return to the Viennese gemütlichkeit after the trio section. Leonard led the way in the extroverted finale, setting an impish tone for its catchy, bubbly theme that the rest of the group eagerly continued.

The Dohnányi made an excellent ending to a concert whose first half contained two 20th-century rarities and an 18th-century standard. That latter piece was the opening work on the program, the Oboe Quartet (in F, K. 370) of Mozart, featuring oboist Erika Yamada accompanied by Reder, Bergeron and violinist Mei Mei Luo.

Yamada is a veteran player familiar to local audiences from her long tenure at the Florida Philharmonic and her current work with the Symphonia Boca Raton and the Atlantic Classical Orchestra. She has a focused, classic oboe sound and impressive technique, both of which were on clear display in this reading of the Mozart.

The four women gelled nicely as a unit, and indeed, Yamada blended in Sunday with her fellow musicians rather than dominated. This is a relatively modest piece of chamber music, distinguished by Mozart’s beautiful and characteristic melodic writing and his tasteful concision. And it received a modest performance, thoroughly professional but not especially insightful.

Yamada had a good command of the many virtuosic elements in this quartet, spinning off scales and high-register writing with sureness, and Luo and Reder made a good team in their own frequent passages of athletic writing, which Mozart sometimes uses in a call-and-response manner. The best moments came in the first pages of the second movement, with its elegant melancholy, gently played by Yamada, and in the sprightly finale, which offered her a chance to show off her nimble fingers to good effect.

The Mozart was followed by the four-movement Suite in the Spanish Style for oboe, bassoon, trumpet and piano by the French composer, critic and broadcaster Alexis Roland-Manuel. Perhaps best-known as a student and biographer of Maurice Ravel, Roland-Manuel’s suite is a delightful work, not remotely deep or profound, but entirely entertaining.

It received a spirited rendition from Yamada, Leonard, trumpeter Marc Reese and bassoonist Gabriel Beavers, filling in for festival co-founder Michael Ellert. The music is highly flavored with Spanish color but none of the clichés (as Leonard noted in remarks before the performance); in its compass and assimilated style it was reminiscent of a piece such as Peter Warlock’s Capriol Suite. Divided into four movements — Entrada, Villancico, Melodrama and Final — Roland-Manuel’s suite is melody-dominated and songlike, urbane and assertive in a most civilized way.

Beavers, a University of Miami professor, was especially good here, featured prominently in the Entrada. He has a large, smoky, beautiful bassoon tone, distinctive and rich, and arresting on first hearing. He probably makes an ideal bassoon soloist, and it would be wonderful to hear him front and center in an orchestral setting. And if the chamber festival is able to return to the recording studio, this piece, apparently unrecorded or only rarely so, would make a fine selection.

Harpist Deborah Fleisher (daughter of the great American pianist and pedagogue Leon Fleisher) joined Luo and flutist Karen Dixon for the last work on the first half, the Suite (Op. 6) for flute, violin and harp of the British composer and conductor Eugene Goossens.

Goossens’ piece, published in 1914 when the composer was 21, is heavily influenced by French music, except in the finale, which has a contrasting subject more akin to English folksong. A stylistic hybrid, in other words, which if not notably personal is nonetheless masterful. This is a composer who knows how to show off each of the three instruments to fine effect, and also how to make them work together as an ensemble.

Dixon had ample opportunity to demonstrate the clarity of her pretty sound, especially in the second-movement Serenade, and Luo handled the surprisingly imaginative violin part with consummate expertise. Fleisher was excellent throughout, a tasteful accompanist for much of the work, and then impressively virtuosic in the finale, which has an effective, extravagant explosion of sound in the middle.

Film: Just in time with the opening of movie theaters in Palm Beach County comes the season’s most … END_OF_DOCUMENT_TOKEN_TO_BE_REPLACED

Music: The very last concert Franz Joseph Haydn attended in his life was in March 1808, about a year … END_OF_DOCUMENT_TOKEN_TO_BE_REPLACED