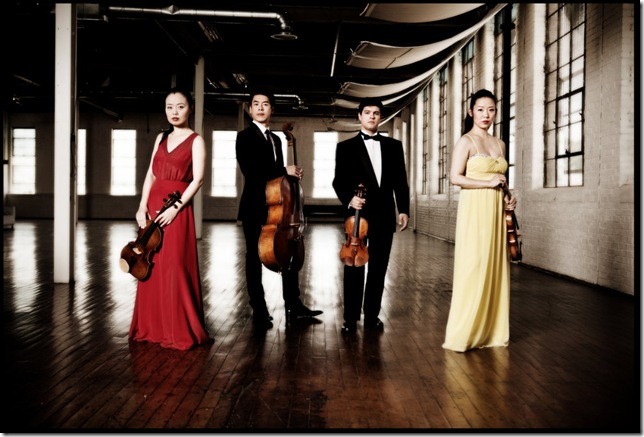 Vega is the name of the brightest star in the constellation Lyra. And while the young Vega String Quartet, which played the Flagler Museum series Jan. 26, may be only on the road to that distinction, they do produce a rapturous, rounded sound, and that is perhaps their signature.

Now in residence at Emory University in Atlanta, the quartet — violinists Domenic Salerni and Jessica Shuang Wu, violist Yinzi Kong and cellist Guang Wang — all met while students at Boca Raton’s Harid Conservatory. They were part of the conservatory’s last graduating music class before it was merged with Lynn University.

Producing a very bright sound, the Vega opened the Allegro assai appassionato first movement with glee. Haydn comes straight to the point, using the sonata form he codified. The second-movement scherzo is exquisite music, with each instrument nicely voiced. Violinist Salerni produced lovely solo work in the third movement, and the insistent rhythm at the end of the movement was beautifully executed by all four players.

The Presto of the finale opens with so many tunes they would fill an opera. Again, brilliant playing and a fine solo at the end from Salerni.

Next came Beethoven’s String Quartet No. 11 (in F minor, Op. 95). Naming it “Quartetto Serioso,” it is the only quartet to which he gave a qualifying title. Begun in 1810, not performed in public until 1814 and not published until 1816, it is introspective, impassioned, dramatic, forceful and violent

Stylistically ahead of its time, it opens as directly as possible with an abrupt melodic motive of five notes. Beethoven eschews the sonata form. All four players take the five-note melody, play it in octaves, not harmonized, and a very short development follows. This is the new Beethoven, showing he has no need of long sonata-form structures.

Wang opened the second movement nicely with his playing of the soft cello tune, and in the central fugal section, the Vega produced that warm, rapturous sound I mentioned at the outset.

After the dramatic Scherzo, the Vega’s brilliance was on full display in the finale, in which Beethoven introduces a major tonality, making for a liberating, optimistic and triumphal note to bring this quartet to a close.

After intermission, the Vega played Felix Mendelssohn’s String Quartet No. 4 (in E minor, Op. 44, No. 2), written while the composer while he was on his extended honeymoon with his wife, Cecile Jeanrenaud.

The first movement has a vigorous opening, its main theme brilliantly played by Salerni. Next, the music echoes Mendelssohn’s Songs Without Words piano pieces, and at this point one heard the Vega’s special rhapsodic sound again. The Scherzo of this quartet is one of those mysterious nocturnal elfin dances in which Mendelssohn is unmatched. It skims along, up in the air, and is simply delightful. Lovely plucked notes from Wang and beautiful glissandos from the other three were very attractive.

The third movement, prayerful and reflective, seems to take symphonic proportions; the sustained high D at the end from Salerni was extraordinary. The Allegro con fuoco finale is music of high energy, and the Vega again played marvelously well, delving into its intense sprint to the end with great élan.

Next up on the Flagler Museum series is the Neave Piano Trio, which has scheduled works trios by Dvořák (No. 3 in F minor) and Erich Wolfgang Korngold (in D, his Op. 1). The concert is set for Tuesday, Feb. 9, at 7:30 pm. Tickets: $70 (includes post-concert champagne reception). Call 561-655-2833 or visit www.flaglermuseum.us.

Music: The very last concert Franz Joseph Haydn attended in his life was in March 1808, about a year … END_OF_DOCUMENT_TOKEN_TO_BE_REPLACED

Film: Major League Baseball culminates each season with the World Series, but to find the true … END_OF_DOCUMENT_TOKEN_TO_BE_REPLACED