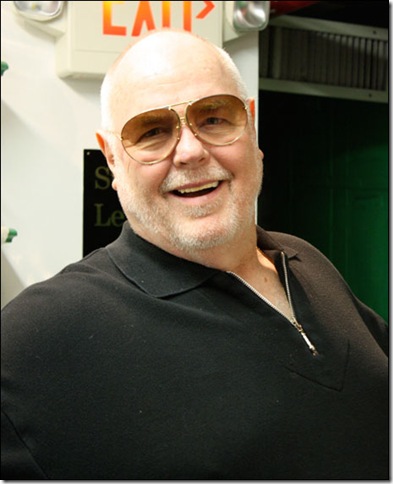 Palm Beach Dramaworks takes its motto, “Theater to think about,” seriously, as seen in its current mainstage production, The History Boys.

But it also likes to slip in some entertaining education in its ancillary programs, like Dramalogue, a series of live interviews, lectures and roundtable discussions that introduces the audience to some of the behind-the-scene artists who play such important roles in this collaborative activity called theater.

Credit the growing national reputation of Dramaworks and the attractive climate here in December for drawing a legend of the Broadway stage — or at least the orchestra pit — musical director Paul Gemignani, who kicked off this season’s series Monday. As interviewed by Sheryl Flatow, the theater’s newsletter writer/editor and a frequent contributor to Playbill, the session was a breezy, often dishy crash course in how a musical is assembled and rehearsed. (Hint: Not all of the score is written by the composer.)

Gemignani, who received a Lifetime Achievement Tony Award in 2001, is most closely associated with Stephen Sondheim, having worked on his shows since the original Follies (1971), and originated the musical direction on all of his new musicals since Pacific Overtures (1976).

He also oversaw the music on Jerome Robbins’ Broadway, assuring the Dramaworks audience that he was indeed “one of the meanest SOBs you’d ever want to meet,” that “all of his meanness was (based in) insecurity.”

When he worked on a revival of West Side Story, composer Leonard Bernstein would give him nightly, often contradictory, notes on his conducting. One night it was too slow, the next too fast. Gemignani recalled finally being freed of worry over Bernstein’s carping when the composer came up behind him one night and whispered in his ear, “You will never get it right.”

One often sensed Gemignani stopping short of stronger opinions of some of the people he has worked with in the theater, but his admiration for Sondheim seemed boundless. He called him “the kindest composer I’ve ever met,” and although he has a reputation for being very exacting with the way his music is played, Gemignani finds him to be extremely collaborative and open to the thoughts of others.

For instance, it was Gemignani who suggested to Sondheim that the role of George in Sunday in the Park with George be changed from a baritone to a tenor, a revision that put the part squarely in the range of Mandy Patinkin. Although the song “The Day Off” (aka “The Dog Song”) was originally written as a duet for a male and a female voice supplying the yapping of the canines Seurat was sketching, a rehearsal session between Patinkin and Gemignani led to some playful experimenting that led to it becoming a solo for Patinkin. And it was Gemignani, he insists, who added the single note of harmony to the first act finale, “Sunday.”

And that is what a great musical director does.

Film: Playwright August Wilson began his chronicle of the African-American experience throughout the … END_OF_DOCUMENT_TOKEN_TO_BE_REPLACED

Film: Just in time with the opening of movie theaters in Palm Beach County comes the season’s most … END_OF_DOCUMENT_TOKEN_TO_BE_REPLACED

Music: The very last concert Franz Joseph Haydn attended in his life was in March 1808, about a year … END_OF_DOCUMENT_TOKEN_TO_BE_REPLACED