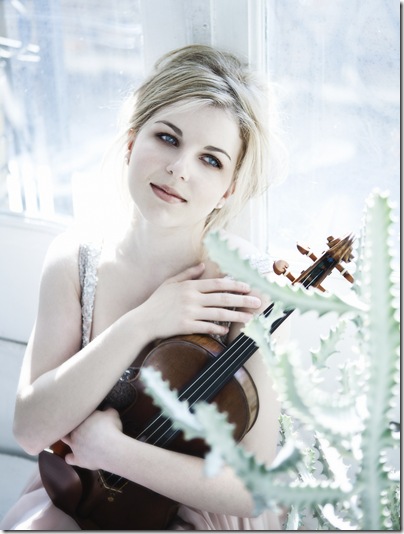 Caroline Goulding is sitting in Finouk, a café on the Grabenstrasse in the picturesque German town of Kronberg im Taunus, near Frankfurt.

The young American violinist is there in late March with her recital partner, German pianist Danae Dörken, and they’re on their way to rehearsal for concerts next month in Bautzen and Berlin as well as prepping for a recording session. But in the meantime, Goulding is taking a moment to pick up her phone and discuss her current big project, the world premiere in South Florida of a violin concerto.

“The concerto is quite fitting for the violin as an instrument, which I’m very thankful for, because you never know with these things how violinistic something will be,” Goulding said. “But he seems to have a great idea of how to compose for the instrument.”

The work she’s talking about is the Violin Concerto (The Infinite Dance) by the Chinese-American composer Zhou Tian, who currently teaches composition at Colgate University in Hamilton, N.Y. Goulding and the Atlantic Classical Orchestra will give the world premiere Tuesday afternoon at the Eissey Campus Theatre at Palm Beach State College in Palm Beach Gardens.

She’ll play it three more times after that, on Thursday night at the Waxlax Center for the Performing Arts in Vero Beach, and twice at the Lyric Theatre in Stuart, on Friday afternoon and evening.

The concerto was commissioned for the Fort Pierce-based ACO as part of its new-music partnership with Boston’s Rappaport Foundation, which funded new works by Garth Neustadter and Jeffery Parola last season, and Patrick Harling this season, along with the Zhou concerto. Also on the program are Alexander Mackenzie’s Benedictus and Mendelssohn’s Hebrides Overture — both a nod to conductor Stewart Robertson’s Scots background — and the Symphony No. 7 (in A, Op. 92) of Beethoven.

The daughter of special education teachers, Goulding, 22, was born in Port Huron, Mich., and began playing the violin at age 3, studying with Julia Kurtyka and later Paul Kantor at the University of Michigan. When Kantor took a position at the Cleveland Institute of Music, the Goulding family relocated so that 12-year-old Caroline could continue her studies.

She is now is based in Boston, where she has worked for years with the eminent violinist and founder of the Cleveland Quartet, Don Weilerstein, who teaches at the New England Conservatory. For the past two years, she’s been studying in Kronberg at the Kronberg Academy, where her teacher is the great German violinist Christian Tetzlaff.

The academy is a graduate school of sorts in which young, talented string players work with some of the finest musicians in the world in an effort to prepare them for healthy careers. The school’s American fundraising arm is in Boca Raton, and has sponsored recitals this year at the Max Planck Institute in Jupiter and the Steinway Gallery in Boca Raton.

Goulding has almost completed her two-year stint at the academy.

“It’s been a wonderful experience. The school is very small, and extremely flexible, which has many advantages, especially for the traveling performer, which most of the students are,” she said. “Studying with Christian Tetzlaff has been an inspiring and eye-opening experience for me.”

Zhou’s concerto, a three-movement work of roughly 25 minutes’ duration, is laid out in traditional style, with a barn-burner finale after a big opening movement and a heartfelt slow middle. Its language is contemporary but also fairly conservative, solidly tonal and with some intriguing melodic quirks.

Zhou, 33, sees violin concertos as something of a breed apart.

“With a violin concerto, perhaps more than with any other solo instrument, you have to respect the language of the instrument. That might sound a little bit vague, but I’m a firm believer in the idea that you have to write in the language of the instrument you’re writing for,” said Zhou, a pianist whose father is a violinist and who is married to Mingzhao Zhou, a violinist in the Detroit Symphony Orchestra.

“It’s also important for the violinist to be the center of the piece,” he said, which sounds obvious until you research the concerto literature. “If you listen to a lot of contemporary works, some of them don’t do that. Sometimes (composers) get distracted by orchestration and the violinist gets sidetracked.”

Zhou said he felt “empowered by the tradition” of violin concerti when writing the piece, and that includes making sure there was a healthy amount of display for the soloist.

“Sometimes virtuosity in new music is underrated,” he said. “When people mention the word ‘virtuosity,’ they don’t think about new music. They think about Tchaikovsky … But I think, ‘Why not?’ Because they can do it. We have great musicians out there, and virtuosity doesn’t mean ‘old.’

“For a violin concerto to be effective, it needs to be at a certain technical level. It needs to be demanding,” he said. “If it’s too easy, it won’t satisfy as a 25-minute concerto with a violinist taking the leading role.” 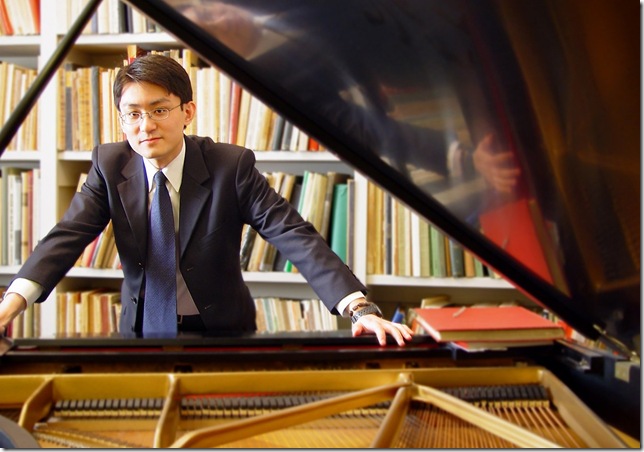 Zhou was born in Hangzhou, a coastal city southwest of Shanghai that he calls “the San Diego of China.” He graduated from a music high school in that city and then came to Philadelphia in 2001 for study at the Curtis Institute of Music.

“I just remember what a crazy-talented group of people they were,” he said. “It was just unbelievable. The first day I arrived at Curtis, I saw Lang Lang just sitting in the lounge drinking coffee. And then there was Roberto Diaz, and Gary Graffman. All these people I saw before on CD covers, and there they were.”

It was there, too, that he began to be known simply by his family name, Zhou, because after asking his name, Curtis residents would invariably think he’d said “Joe.” He rolled with it, and says his given name, Tian, has by now dropped out of the picture except for his driver’s license and his scores.

“I don’t feel like ‘Tian’ anymore. Nobody calls me Tian. It’s just Zhou. It’s like Kramer,” he said, referring to the manic Seinfeld character. “You just use your last name.”

Still, Zhou does touch on his Chinese origins with subtle evocations of the two-string folk fiddle known as the erhu, which is often played with a kind of wide vibrato that sounds highly emotional.

“In terms of melodic material, that’s where I was influenced by the erhu,” he said. “It’s similar to a violin in that it’s very lyrical, but what’s different about the erhu is that it was never systematically categorized according to a system for how to notate the notes … Traditionally, it was very much improvised.

“And so that freedom, that free meter, you don’t know with traditional music where the barlines are. I cannot figure out whether it’s three-four or four-four, or five-four,” he said. “It’s just continuous, never-ending melody. And that really fascinated me, because in a way, that’s very modern thinking.”

It’s a highly expressive melody, too, because traditional Chinese music was always accompanied by poetry and never stood alone, Zhou said. “I definitely used that, and tried to convey that sense of emotion,” he said.

Conductor Robertson, who will be leading his final ACO concerts this week — he is retiring to focus on treatment for his Parkinson’s disease — said he had known of Zhou’s music for some time, partly through the consulting committee of composers the orchestra has assembled in order to choose winners of the Rappaport Foundation commissions.

The Zhou concerto is effectively modeled on concertos by Tchaikovsky, Wienawski and Glazunov, Robertson said, and while the harmonies are much more modern, “there’s not a lot for listeners to take exception to.”

“And then suddenly, the harmony will come in logically afterward and all will be resolved,” he said.

The performances will be a first for Zhou and Goulding. It’s his first concerto, and her first commissioned concerto. Goulding said she saw first saw the score about two months ago, and began concentrating intensively on it in early March, amid a number of other engagements.

But that’s the way she likes to work.

“When the Beethoven Violin Concerto was performed, he was still working on the third movement,” she said. “The nice thing is that I’m someone who likes to work under pressure anyway … I don’t if that’s good or bad, but that’s how I’ve always worked.”

“That thing is scary, let me tell you,” Goulding said of the Enescu, which she played in recital at the beginning of March at Zurich’s Tonhalle.

But last fall she played the Violin Concerto of Alban Berg in several concerts, and that has helped encourage her interest in contemporary music. For now, though, she’s digging into the canonical repertoire.

“I haven’t really focused on new music yet. Is it something that I’d lke to focus on in the future? Yes. Is it something I’m open to? Absolutely. But I haven’t done so much of it yet, which is fine, because I’m still young and still exploring, and still wanting to explore, in depth, the classics. It’s not that I have a taste for one over the other,” she said.

Goulding is one of an exceptional array of young, enormously capable violinists currently working, but she says at this point she isn’t really doing anything to make herself stand out except stay true to herself.

“I think that’s the beautiful thing about it. Sooner or later you realize you really can’t do anything about it so you might as well be yourself,” she said. “Things can change so much, and especially in the arts … I’m just appreciative of what I’ve done, and what I’m doing, and the projects ahead.”

Zhou is pursuing the whole gamut of composition, but particularly would like to try his hand at opera and full-length ballet. And he’s optimistic about the future of the art.

“Contrary to a lot of comments out there, I think we’re living in a great time, particularly for new music. Besides traditional orchestras, there are new music groups that are doing really, really well,” he said. And today’s audiences have widened their appreciation of contemporary composition, which is taking place in an environment far different than that of 30 years ago, when all composers seemingly needed to write atonal music to have any sort of professional credibility.

“But we’re not living in that time anymore,” Zhou said. “Right now, as long as it’s good music, people will appreciate it for what it is. And that’s amazing.”

Film: Playwright August Wilson began his chronicle of the African-American experience throughout the … END_OF_DOCUMENT_TOKEN_TO_BE_REPLACED

Film: Just in time with the opening of movie theaters in Palm Beach County comes the season’s most … END_OF_DOCUMENT_TOKEN_TO_BE_REPLACED

Music: The very last concert Franz Joseph Haydn attended in his life was in March 1808, about a year … END_OF_DOCUMENT_TOKEN_TO_BE_REPLACED