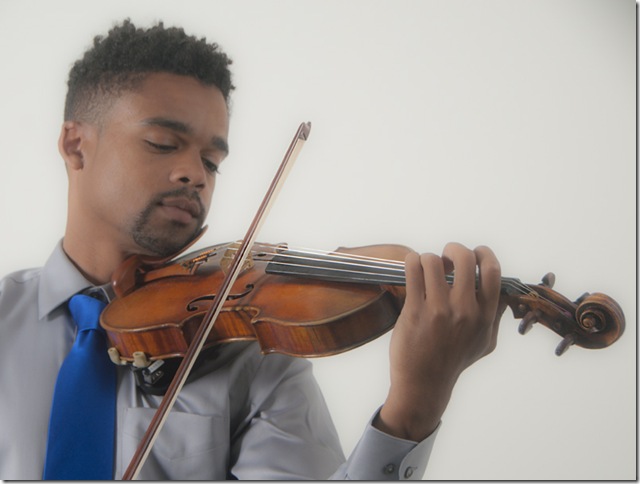 With a master’s degree from the Lynn Conservatory of Music in Boca Raton, the 29-year-old is often paired with fellow classical musicians in the intimate, 40-seat room — his Jan. 18 presentation featured acclaimed Chinese-American pianist Tao Lin — but he occasionally veers outside of that comfort zone, as he did in his duo last Nov. 16 with jazz vocalist Kellie Floyd.

On Feb. 7, Johnson went further out by performing with the established area blues duo of singing harmonica player Clay Goldstein and singing guitarist Julius Sanna for a near-capacity audience. The violinist opened the first set unaccompanied, blending J.S. Bach’s Chaconne with one of John Corigliano’s more modern Red Violin caprices. And while the speed of his right-hand bowing was impressive, he might have been better served to warm up with a slower, less challenging piece.

After their introductions, Goldstein sang his original blues shuffle “Billy Boy,” anchored by Sanna’s ever-steady rhythm guitar, plus a rocking cover of Bruce Springsteen’s “You Can Look But You Better Not Touch.” Both also featured the vocalist’s soaring harmonica solos, which echoed the work of the J. Geils Band’s harp ace Magic Dick, yet Johnson didn’t participate in either song. To this point, the stylistic mix of classical, blues and rock appeared a musical culture clash.

Yet Sanna meshed the proceedings by wisely singing the familiar George Gershwin standard “Summertime.” The versatile Goldstein suitably took the rougher edges off of his solo, this time sounding more like jazz icon Toots Thielemans, and Johnson strode out to answer it with a lyrical break of his own. The mix of covers and originals continued with Sanna singing Jack Johnson’s pop tune “Upside Down,” another highlight, and Goldstein adding his energetic blues original, “Beautiful Sky,” during which he enticed Johnson into trading solos. His feet now wet, the violinist would stay involved through the rest of the set.

“We’ve been playing quite a few happy tunes,” Goldstein said, “so now here’s a sad song.”

The Otis Rush blues chestnut “Homework” may have involved sad lyrical subject matter, but the vocalist’s theatrical delivery (the Baltimore native was once “The Bird,” the mascot for the city’s Major League Baseball team the Orioles) brought the tune to life amid Sanna’s impeccable chording and Johnson’s solo. The guitarist then closed the 50-minute set by singing the Ray Charles version of the Hoagy Carmichael standard “Georgia on My Mind,” also highlighted by Goldstein’s circular breathing harmonica technique and some of Johnson’s best interplay of the evening.

The violinist opened the second set as he had the first, playing an accelerated, unaccompanied version of Spanish guitarist Francisco Tarrega’s Recuerdos de la Alhambra, complete with a pizzicato closing strum. By now, the un-amplified trio knew the audience was behind them, and appeared more relaxed.

Sanna’s tune “Nairobi Groove” featured his funky side, dynamics and vocal harmonies with Goldstein, and showed the heritage of its Tanzania-born composer, who also lived in Kenya before moving from Africa to Oklahoma on a college soccer scholarship.

Goldstein’s original “Cute to the Extreme” got Johnson reactivated, serving as an appetizer for his “Yankee Fan Blues,” the ultimate Orioles fan’s lament, during which he and Johnson traded fours. The violinist curiously sat out of Sanna’s version of the familiar jazz standard “All of Me,” but returned to offer his best second-set solo on the guitarist’s playful original “Choo Choo Train.”

A Goldstein-led closing medley of the Johnny Cash tunes “Ring of Fire” and “Get Rhythm” opened with his wild, unaccompanied harmonica solo. Sanna’s playing then entered to provide the glue, as it had all evening, and Johnson comfortably shifted into the medley’s final segue, the Louis Armstrong rendition of the traditional gospel hymn “When the Saints Go Marching In.”

Considering that the program was titled “Jam Along,” Johnson had no choice but to eventually dive in with his guests. Yet the classical musician is used to performing while reading exacting scores rather than improvising, while popular stylists like Goldstein and Sanna do the opposite. The violinist met them in the middle by using his ears and instincts, and considering that he was far more out of his element than they were, the open-minded host did a more than admirable job.

Film: Playwright August Wilson began his chronicle of the African-American experience throughout the … END_OF_DOCUMENT_TOKEN_TO_BE_REPLACED

Film: Just in time with the opening of movie theaters in Palm Beach County comes the season’s most … END_OF_DOCUMENT_TOKEN_TO_BE_REPLACED

Music: The very last concert Franz Joseph Haydn attended in his life was in March 1808, about a year … END_OF_DOCUMENT_TOKEN_TO_BE_REPLACED