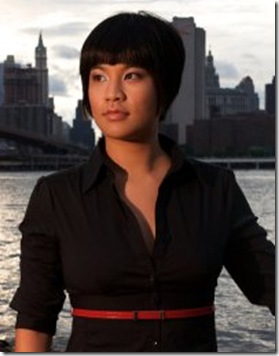 If eclecticism is the name of the game for today’s younger virtuosi, then to be successful these days requires that you play all those different kinds of pieces equally well.

It won’t do, in other words, to have a middling Mozart but an incandescent Shostakovich. Too much is expected, but that doesn’t mean you can’t shine a little brighter in some things more than in others.

Thankfully, the Canadian-born violinist and onetime New World Symphony fellow Yuki Numata has a good grasp of many varieties of style, and while her specialty is contemporary music, she was most persuasive Wednesday afternoon throughout a recital whose designated lodestar was J.S. Bach.

In an appearance accompanied by the Korean-born pianist and current New World fellow Hyojin Ahn at Stage West in Palm Beach State College’s Duncan Theatre, Numata offered an engaging, often refreshing program that showed an intelligent musical mind at work. She is a strong, polished player who kept even the most flashy parts of her recital tightly under control, and that helped the audiences follow the Bachian braid woven through three of the pieces more easily.

The most contemporary choice Numata made in her Young Artist Series performance was a work by the American composer Ryan Francis, a native of Oregon who still is in his 20s and is studying for a doctorate from Juilliard. Francis’ piece, Sillage (the word is French for “wake,” as in what a boat creates as it moves along the water), sounds directly inspired by the B minor Partita of Bach, the Allemande movement of which Numata played just before it.

Sillage, composed in 2008, is designed to be played after the Double section of the Allemande, and listeners found that the musical conversation was continuing in a completely different place. In this work, the violin plays virtually non-stop the same basic broken-chord pattern of the Double, but plays it entirely at a whisper, floating above wee-hours jazz-flavored chords in the piano.

It was nothing if not evocative, and an interesting, compelling choice for this recital. The Bach Allemande that came before it received a sober, respectful reading, and much the same can be said about the Beethoven sonata — No. 7 in C minor, Op. 30, No. 2 — that opened the program.

In the Beethoven, Numata showed herself to be a player of considerable physical strength; if the first movement was not especially propulsive, it was big and precise, and she partnered well with Ahn, a pianist of admirable technique and the same kind of contained focus.

The second half began with the second of the six solo sonatas (in A minor, Op. 27, No. 2) of the Belgian virtuoso and composer Eugène Ysaÿe, a work that begins with a quote from the Bach E major solo sonata. Here, Numata showed a different side of her performing personality. Unleashed on the vividness of this piece, with its frequent citations of the ancient Dies irae church melody, Numata played with broad emotion and high drama.

She also demonstrated a thorough mastery of the sonata’s considerable difficulties, which in addition to a long list of flashy technique stunts, include often-startling shifts of mood, particularly in the first movement. The second movement’s melancholy song was played with force and beauty, and in the third (Danse des Ombres) she let the theme of the Sarabande blossom with warmth before moving on to the variations.

At the end of the last movement, her final triple-stop cadence came up just a hair under pitch, but those chords followed a passionate, powerful reading in which the Dies irae motif and the tightly wound main theme were punched out for maximum effect.

Numata closed her recital with a tasteful reading of the Ravel G major violin sonata. The violinist’s basic orientation toward firm control of the music could be heard clearly in the second, jazz-influenced movement, titled Blues.

The slangy blue-note main theme was big but not self-indulgent or overly broad, a good example of Numata’s fidelity to the different styles she handles so competently.

Film: Playwright August Wilson began his chronicle of the African-American experience throughout the … END_OF_DOCUMENT_TOKEN_TO_BE_REPLACED

Film: Just in time with the opening of movie theaters in Palm Beach County comes the season’s most … END_OF_DOCUMENT_TOKEN_TO_BE_REPLACED

Music: The very last concert Franz Joseph Haydn attended in his life was in March 1808, about a year … END_OF_DOCUMENT_TOKEN_TO_BE_REPLACED