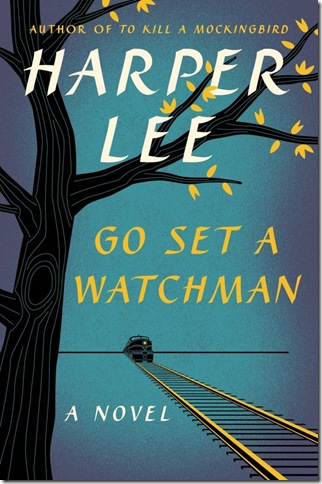 Book critics understandably sought to compare the storyline in Watchman with the theme in Harper Lee’s first book, To Kill a Mockingbird, which was published in 1960 and won a Pulitzer Prize. Some expressed surprise that Atticus Finch, the lovable hero in Mockingbird, had turned into an ugly racist in Watchman, which is set in the 1950s in the fictional town of Maycomb, Ala.

The pivotal theme in Watchman involves Finch’s daughter, Jean Louise (“Scout” in Mockingbird), who is angry and in shock when she returns home from New York City at age 26 to find that her father, uncle, aunt and boyfriend are racists.

Watchman meanders for the first third of the book, but picks up when Jean Louise learns that her father and her boyfriend, Henry Clinton, are active in the racist Maycomb County Citizens’ Council. She sneaks into a meeting, where she hears a loudmouth bigot proclaim that “no niggers and no Supreme Court” are going to tell him what to do.

The next day, Jean Louise tells Henry, “I saw you and Atticus in your glory down there at that table with that – that scum – that dreadful man, and I tell you my stomach turned. … I threw up … How in the name of God could you?”

Much of the story focuses on Jean Louise’s bafflement as to how she could have grown up without knowing about her family’s beliefs regarding race.

Comparing the two books can be confounding because of the order of publication. First, we have the saintly Atticus in Mockingbird and then, oops, Atticus becomes a raving racist two decades later. But Watchman was written first and kept under lock and key for more than half a century. It is not clear how or why Harper Lee agreed to allow publication now.

All her life Jean Louise adored her father, who raised her after her mother died when she was 6. In several drawn-out scenes, Atticus, who is 72 in Watchman, defends his views. “Do you want Negroes by the carload,” he asks, “in our schools and churches and theaters? Do you want them in our world? … Do you want your children going to a school that’s been dragged down to accommodate Negro children?”

“Honey,” he goes on, “you do not seem to understand that the Negroes down here are still in their childhood as a people.”

Jean Louise reacts with bitter denunciations of her father, calling him “a coward as well as a snob and a tyrant.”

The story takes place during a decade in which the U.S. Supreme Court struck down separate-but-equal schools for black students. Opposition to integrated schools was based in part on fear of intermarriage.

Written in the third person, Watchman includes frequent flashbacks to Jean Louise’s childhood years. In one comical scene, fifth-grade schoolmates convince Jean Louise, then known as “Scout,” that she could become pregnant if a boy French-kissed her.

Reminiscent of Mockingbird, Atticus agrees to defend a black boy accused of killing a white man in a drunk-driving accident. He takes the case, he says, to keep it out of the hands of “colored lawyers” brought in by the NAACP.

The book’s title from a biblical passage involves Jean Louise’s longing for a “watchman” to guide her through life’s difficulties.

Lee, who is 89, suffered a stroke in 2007 and now lives in a nursing home, partially blind and deaf. For decades she resisted suggestions that she write another book, although one could argue that she already had written another book — Watchman.

Overall, Watchman disappoints. Perhaps our expectations were too high. The book is more a curiosity than a great work of literature.

Film: Playwright August Wilson began his chronicle of the African-American experience throughout the … END_OF_DOCUMENT_TOKEN_TO_BE_REPLACED

Film: Just in time with the opening of movie theaters in Palm Beach County comes the season’s most … END_OF_DOCUMENT_TOKEN_TO_BE_REPLACED

Music: The very last concert Franz Joseph Haydn attended in his life was in March 1808, about a year … END_OF_DOCUMENT_TOKEN_TO_BE_REPLACED