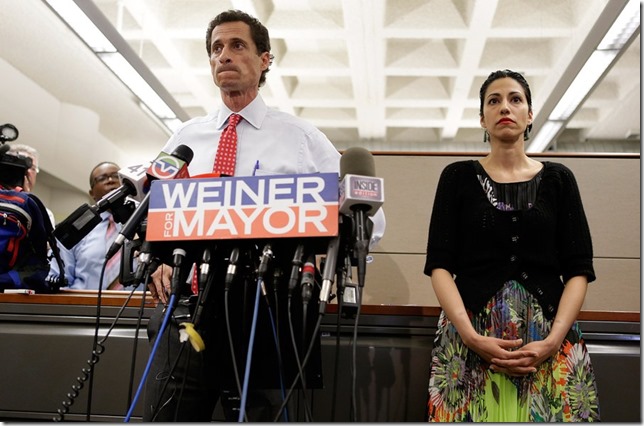 At one point during Weiner, Josh Kriegman and Elyse Steinberg’s documentary about the man with the most unfortunate surname in modern political history, Kriegman is in the backseat of Anthony Weiner’s car, his camera trained on the former congressman.

Kriegman, off-camera but ever-present, asks one of many pesky questions about the then mayoral candidate’s sexting scandal and its aftermath, and Weiner, for a brief but cutting moment, becomes a movie critic, questioning Kriegman’s decision to rupture the movie’s proposed verité style: “I never heard a fly on the wall that talked.”

It’s not the only time Weiner goes incisively meta. Late in the movie, after Weiner’s dirty, bulging laundry has been re-litigated for the past 90 minutes, he makes the point to Kriegman that by “the laws of entertainment gravity, you’re going to be sucked into the same vortex” as the guttersnipe media that salivated over every dick pic during the slow-news summer of 2013.

It’s another astute and accurate statement. Weiner doesn’t have the laser-focused, muckraking drive that made Alex Gibney’s Client 9: The Rise and Fall of Eliot Spitzer so much more than a sex-scandal postmortem. Gibney convincingly portrayed the New York governor as the victim of a right-wing witch hunt whose extramarital proclivities were leaked to the media just as his crusades against Wall Street chicanery were reaching a fevered pitch.

Kriegman and Steinberg would have benefited from taking Gibney’s cue and spending a bit more time on their subject’s illustrious career as a bold, rabble-rousing populist, most of which is summed up in a prologue. But politics are quickly eschewed like lemon rinds, the better to get to the juicy stuff inside. Weiner is breezy, funny, salacious and head-shakingly watchable — there’s an action-packed chase scene through a McDonald’s, too — even when, as Weiner himself forecasts, it risks insubstantiality.

After a wrap-up of the original Weiner sexting saga ca. 2011 (we get to hear Wolf Blitzer gravely confront Weiner with the question/statement “you’d know if this was your underpants”), the directors begin to follow Weiner at the announcement of his ill-fated 2013 mayoral run, hoping to capture the public, media and Beltway reaction to a once-beloved politician rising from disgrace to beg the vox populi for redemption. Kriegman and Steinberg enjoy the dramatic fortune of watching the very same sexting issue raise its ugly head (so to speak) again at the height of the campaign, as more lewd photos, some taken after the mea culpa that ended his congressional career, surface in the press, flummoxing Weiner, his conflicted wife Huma Abedin and his embattled staff.

Weiner relies heavily and wittily on cable-news and late-night comedy chatter from the period, playing like a greatest-hits collection of political theater from a less dangerous time than our present. You get to relive all your favorites: Bill Maher and Jane Lynch reading Weiner’s Penthouse-perfect text exchanges; Lawrence O’Donnell inviting Weiner on his program for a combative scold beginning with the question “What is wrong with you?”; Weiner’s epic shouting match in a New York deli with a righteous, finger-wagging Zionist.

These YouTube nuggets are interspersed with the directors’ own footage, a Bataan Death March through endless humiliating campaign stops and tabloid-style interviews when Weiner would rather discuss housing in the Bronx or single-payer health care — the candidate insisting, helplessly, that “this campaign is not about me,” until said campaign peters to its inevitable anticlimax.

All the while, Kriegman focuses his wandering camera on Abedin as she bleeds into the background in her home and office, standing by her man when her body language and facial expressions say otherwise. It just about breaks your heart, contributing the emotional perspective the movie needs.

Weiner finally resists falling into the same vat of TMZ muck as the footage it proffers, because it’s ultimately an autocritique of the political/media complex. The preening anchors and punny New York Post headline writers come off far worse than Weiner, resembling nothing so much as a clutch of vultures circling a dying animal, blithely referencing Shakespeare and Pascal in their “expert analysis” of the flimsiest (non)sex scandal of the 21st century. Don’t be surprised if you start to root for Weiner, a flawed and fearless David trying to outshout a deaf-eared Goliath with policy proposals.

Defiant to the end, his most effective statement is not the weak tea of his faux-wholesome campaign videos or his public apologies or his occasional reflections to Kriegman’s camera. It’s the middle finger he signals to the glorified paparazzi that swarm his car after his mayoral concession. Right on, Anthony.

Film: Playwright August Wilson began his chronicle of the African-American experience throughout the … END_OF_DOCUMENT_TOKEN_TO_BE_REPLACED

Film: Just in time with the opening of movie theaters in Palm Beach County comes the season’s most … END_OF_DOCUMENT_TOKEN_TO_BE_REPLACED

Music: The very last concert Franz Joseph Haydn attended in his life was in March 1808, about a year … END_OF_DOCUMENT_TOKEN_TO_BE_REPLACED