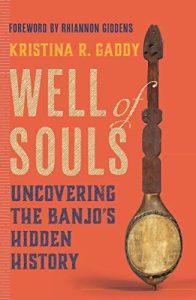 Usually, the movie follows the book. But in the case of Kristina R. Gaddy’s well-researched, comprehensive chronology Well of Souls: Uncovering the Banjo’s Hidden History (Norton), it follows a documentary on the same subject by 14 years.

Bela Fleck & the Flecktones’ namesake banjoist and bandleader covered similar territory in 2008 with Throw Down Your Heart. The Sascha Paladino-directed film followed Fleck as he played with musicians in African countries like Uganda, Tanzania, Gambia and Mali.

The intent of both is to document how the banjo’s African roots, often centered in ceremony, ritual, spirituality, and rebellion, morphed into associations with more Caucasian forms of music like bluegrass and country in the United States.

Fleck’s project earned well-deserved praise for uncovering the banjo’s gourd-based origins — which became more wood, metal and plastic-based in America after initially being used by enslaved people from West and Central Africa. Gaddy’s book accomplishes the same feat, albeit differently.

And more deeply. One advantage that her book has is that its 304 pages, including 33 of indexed notes, can cover more historical ground than a film that’s only slightly more than 90 minutes long. And Gaddy breaks the instrument’s origins into three separate movements, with chapters that include dates and locations, like “Jamaica, 1687,” “Maryland, 1758,” “New Orleans, Louisiana, 1819,” “New York City, 1840,” and “Washington, DC, 1857.”

Gaddy notes that drums were prohibited from the enslaved in Jamaica in 1687, because white Dutch, British and North American colonizers learned of the instruments’ primal power during wars in Africa while transporting slaves to the island during previous years. A 1707 drawing by Anglo-Irish collector Hans Sloane, in which he referred to stringed instruments he called “strum strumps” in his book Voyage to the Islands, is considered to be the earliest image of what would eventually become the modern banjo.

The author notes that slaves were used to process sugar cane in the Caribbean in “Martinique, 1694,” since “In the ten years between 1690 and 1700, the importation of sugar to England would almost double.” By then, drums had emerged in the islands, and combined with gourd-based banjo predecessors and other early stringed instruments for dancing rituals among the enslaved such as the “calenda.” That rhythmic dance, of course, looked too risqué to Europeans to resemble anything based in spirituality. And too dangerous.

Tobacco had become the prime crop in the United States by “Maryland, 1758,” with some of the slaves working the crops coming from Curaçao, the French Antilles, and St. Kitts. And the fiddle and the banjo, now alternately referred to as a bonja, banger, banjar, bangeo, bangeau, or banjoe, were the primary instruments used by slaves who had musical talents and were enlisted to entertain their owners’ white audiences.

In “South Carolina, 1780s,” Gaddy writes of slaves primarily tending to cattle and harvesting trees for lumber. She also flashes back to 1712, when the colony of Carolina broke into North Carolina and South Carolina, and of the 1739 Stono Rebellion in South Carolina. Twenty slaves escaped, marching with drums and banners, burning buildings, and killing outnumbered white slaveowners and servants with stolen firearms. By the time the group had reached 60, a militia attacked, killing all slaves who didn’t successfully flee.

Since the escaped were thought to hail from Angola, Central Africans in general got the reputation of being too rebellious afterward. Predictably, a slave code was then enacted, banning “drums, horns, or other loud instruments, which may call together or give sign or notice to one another of their wicked designs and purposes.”

In “Cap-François, Saint-Domingue, 1782,” Gaddy reveals a historical fact not stressed in modern history books: “In 1804, Saint-Domingue became Haiti, the first nation in the world to permanently outlaw slavery and uphold the statement that all people are equal and should live free.”

“England, 1787” reveals that petitions to end the slave trade circulated throughout London, with British abolitionists proposing a boycott of sugar and rum to help achieve that goal in late 1791. In “Albany, New York, 1803,” Gaddy writes that the state decreed that July 4, 1827, would be the date that slavery officially ended there.

If anything, such flash-forwards, flashbacks and historic non-sequences — “Maryland, 1758” comes before “Jamaica, 1750” in the book’s 1st Movement, for example — are its only weaknesses. Yet confusion over slavery (legal in some countries and states; illegal in others), and the practice’s intertwining with the banjo’s development and importance, over time, practically qualify as necessary to provide the historical record that Fleck’s movie didn’t have time to.

The book’s 2nd Movement and 3rd Movement combine to roughly equal its 1st Movement in length. New Orleans is introduced in the 2nd Movement, only 16 years after becoming part of the United States as a melting pot of French, Spanish, and African heritage. And the banjo is part of that melting pot, even as the first notation of it in the fledgling Crescent City is by an otherwise elitist British-born architect, Benjamin Henry Latrobe (who designed the U.S. Capitol).

Gaddy references the book’s title in regard to the banjo, called a “banza” in its time and place, in “Haiti, 1841”: “The banza, played at funerals where the dead and spirits were honored, wasn’t just a musical instrument. It was a well of souls: a ritual object constructed as a cosmogram. The neck bisecting the gourd from top to bottom is like the poteau-mitan, the line that draws the spirits; the body of the instrument is a circle, the realm to which the spirits are invited.”

Dancing by slaves is seen as the result of the appearance of such spirits, and feared and often prohibited by their owners, like drums and the banjo itself in certain instances. The book’s 3rd Movement spotlights the evolving stringed instrument exclusively in American cities. But while the banjo evolved, the people using it — like the blackface white minstrels at circuses in “New York City, 1840” — did not.

Minstrel shows were becoming so popular in that era that even Black troupes, further darkening their faces with burnt cork like their white counterparts, were forming. All was not lost, however. Famed British writer and social critic Charles Dickens reportedly enjoyed the scene at a Big Apple saloon called Almack’s, where owner Pete Williams welcomed both white and Black patrons and presented African-American musical and dancing entertainment that wasn’t minstrel-based. And the banjo, often now wood-rimmed and with five strings instead of four, had become one of the most popular instruments in America because of its percussive qualities and ability to acoustically project with volume.

New Orleans is visited again mid-19th century. Voodoo-practicing Vodou Society members, many of them free women of color, are arrested there for “encouraging unlawful assemblages of slaves,” perhaps because authorities were paranoid about the mixing of races, and free people with the enslaved.

In the closing chapter “Washington, DC, 1857,” the inauguration of James Buchanan, a pro-slavery Democrat, as the 15th president of the United States, sets the tone. The practice was still legal in places like the nation’s capital, Cuba, Brazil, and in Dutch and Portuguese colonies before the Civil War and the Emancipation Proclamation.

Readers are also introduced to William Boucher Jr. of Baltimore, the banjo maker who claimed to be the first to use more advanced and permanent metal drum hardware to tighten the instrument’s skin heads, allowing them to be mass-produced to meet the burgeoning demand.

The author’s Coda ties things together, explaining how gatherings like the annual Suwannee Banjo Camp in Live Oak, Florida, instruct students about the African origins of the banjo and African-American banjo playing. And that the modern, popular clawhammer or downstroke style most musicians use on the banjo, like the instrument itself, originated in Africa — not in the minstrel show Confederate South.

Well of Souls might prove too inside banjo for casual readers and music fans. But for those interested in the instrument’s history, and of its immersion within slavery itself — as ships sail from Africa to island nations, South America and the United States — it’s a deep and engaging read.

Film: Playwright August Wilson began his chronicle of the African-American experience throughout the … END_OF_DOCUMENT_TOKEN_TO_BE_REPLACED

Film: Just in time with the opening of movie theaters in Palm Beach County comes the season’s most … END_OF_DOCUMENT_TOKEN_TO_BE_REPLACED

Music: The very last concert Franz Joseph Haydn attended in his life was in March 1808, about a year … END_OF_DOCUMENT_TOKEN_TO_BE_REPLACED