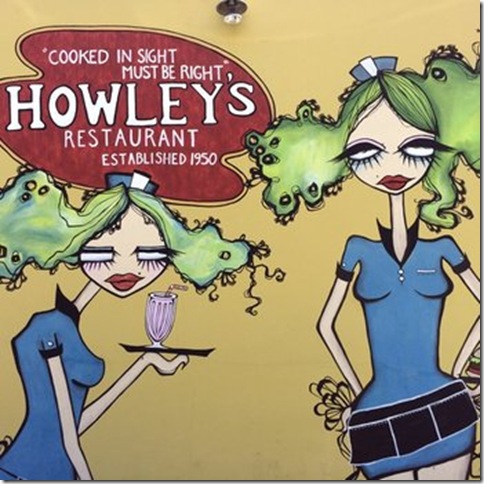 South Florida native Amanda Valdes is having a major moment with her art of creepy darling Goth girls, all doe eyes and angles and cartoonish allure.

Her art focuses on the wildly embellished Girl, and how costuming, identity and myth play into female perceptions. Mermaids, Day of the Dead dames, courtesans and other coquettes parade and pose in her alpha female world.

After attending Dwyer High School, Valdes attended Florida Atlantic University for a semester before transferring to the Art Institute of Fort Lauderdale. At the same time, she was a full-time product specialist at MAC Cosmetics, where she learned about the power of paints and powders.

She is now a full-time artist and her work can be seen all over South Florida, particularly in the Graffiti Garden at Wine Scene on Fern Street, and the exterior of landmark Howley’s Restaurant on South Dixie Highway.

Valdes caught the attention of rapper Vanilla Ice, who featured her paintings on his DIY Network show, The Vanilla Ice Project, and has appeared in a number of local media publications.

Not to be spooked by fame, Amanda Valdes’s Halloween Gallery Takeover is set for Thursday at ArtHouse 429 in Northwood, where from 6:30 p.m. to 9:30 p.m. Valdes will be clearing out her studio archives and creating a whole new collection of never-before-seen works. The evening will also feature a Save Lolita fundraiser by the Orca Network, painted bikini models, Tito’s Handmade Vodka and raffle prizes.

She will also be part of a Nov. 13 event from 7 p.m. to 11 p.m., also at ArtHouse 429: A local showdown mural competition in conjunction with Nicole Henry’s Canvas mural project in downtown West Palm Beach.

Valdes, along with six other local artists, has been selected to paint outdoor murals on seven overhead doors on an active warehouse in Northwood Village. One winner will get a coveted slot on the official Canvas lineup. The competition, conceived by ArtHouse429 in collaboration with CANVAS and the Community Redevelopment Agency, will take place directly across the street from the ArtHouse429 gallery on 25th Street.

The winner of of the local showdown will be announced at the closing brunch event on Nov. 22. 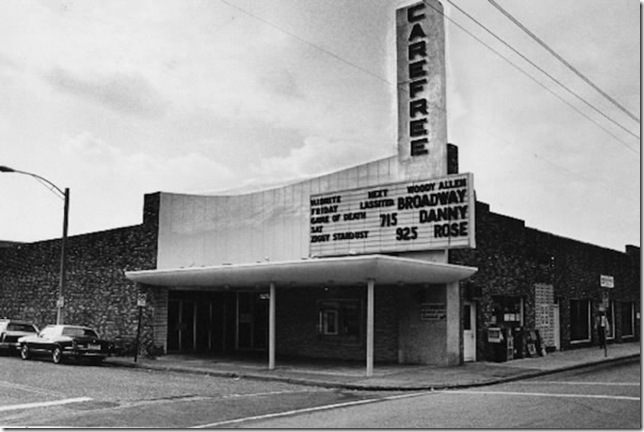 A live music and film mainstay in West Palm Beach for many years, the Carefree Theatre was closed after the hurricanes of 2005 due to extensive and expensive roof damage. It has since sat in disrepair on a prime strip of Dixie Highway.

The historic Carefree Theatre was an 800-seat, single-screen theater. It started out in 1947 as a movie theater, then a short=lived bowling alley with a skating rink on the roof, and then again it was a movie theater in the 1970s and 1980s, specializing in arthouse releases.

In true ridiculous South Florida fashion, The Rocky Horror Picture Show ran here continuously for more than 15 years, making it, at that time, the fifth-longest-running Rocky Horror show in the nation. Pity the cleanup crew dealing with all that rice and those discarded corsets.

In the late 1980s, it was bought by Fantasma Productions, owned by promoter Jon Stoll, who enlivened the Carefree for nearly 20 years with art cinema and touring musicians. One of the former game rooms outside the theater space became a popular comedy club, featuring regular appearances by the late Bill Hicks.

As a concert venue, the stage saw such musical acts as Meat Loaf (who fittingly enough starred in The Rocky Horror Picture Show as Eddie the Biker) Jethro Tull, Weird Al Yankovic, Jefferson Starship, Cowboy Junkies, Brian Setzer, and many more. Stoll died of a brain tumor in 2008 and the Carefree was closed.

Now after years of negotiations and failed deals, the property is being sold to a national real estate developer with a passion for film — and a stated goal to keep the spirit of the property alive.

Buyer Charles Cohen plans to tear down the damaged theater at 2000 S. Dixie Highway in West Palm Beach rather than upgrade the existing building, an issue that has kept other deals from coming to fruition. In its place, he plans to build a center combining commercial space, homes and a theater showing art and classic films. The new center would serve as a cultural destination for film fans and further boost the real estate upswing of this portion of the city.

Cohen is a New York developer who owns the DCOTA, the 800,000-square-foot showroom featuring furniture, fabrics and accessories in Dania Beach. Cohen also is a film producer who heads a theatrical film production and distribution company that was executive producer of Frozen River, a 2008 drama that earned two Academy Award nominations.

Music: The very last concert Franz Joseph Haydn attended in his life was in March 1808, about a year … END_OF_DOCUMENT_TOKEN_TO_BE_REPLACED

Film: Major League Baseball culminates each season with the World Series, but to find the true … END_OF_DOCUMENT_TOKEN_TO_BE_REPLACED