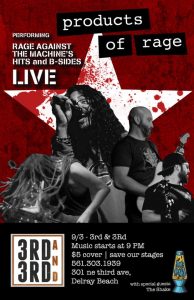 Amid a sea of tribute acts to unworthy subjects, providing acid for the masses by giving the gullible what they think they want but perhaps can’t afford actual tickets to, one occasionally proves legitimate. Such is the case with a West Palm Beach-based Rage Against the Machine tribute called Products of Rage (www.facebook.com/productsofrage).

That’s because Rage, despite intermittent live appearances since its breakup 21 years ago, hasn’t toured afterward (although they hope a scheduled 2020 run delayed by COVID-19 can start next year). Rage also hasn’t released a new studio album of original material since 1999 (its third release, The Battle of Los Angeles); a studio album in general since 2000 (the all-covers disc Renegades), and a post-breakup recording since 2003 (Live at the Grand Olympic Auditorium). Some of these factors may also apply to other artists being paid tribute to, yet most stem from the classic rather than modern rock era.

This L.A.-spawned quartet revolutionized popular music in the otherwise grunge-heavy 1990s via a blend of funk, metal, and hip-hop styles. Bassist Tim Commerford and drummer Brad Wilk functioned as a thunderously funky, lock-step rhythm section, and guitarist Tom Morello employed effects that turned the electric instrument on its ear, often sounding like a DJ or keyboardist. Topping it off was Zack de la Rocha, perhaps the most intense, anti-authoritarian vocalist/rapper in music history.

“We’re all individually passionate about this project,” Rucker says. “It’s gotten to the point where we’re challenging ourselves to learn the Rage songs we don’t already know. And I learn them by playing along to the records and watching videos to see how they pulled off certain tunes within their own set lists.”

Products of Rage formed four years ago, when Rucker and Crocker joined forces with a now-departed singer and drummer, since replaced by Mandel and Weidenfeld. Nearly a decade ago, the young Mandel was emerging as a drummer who was included in the area 2012 School of Rock South Allstars band that toured to Philadelphia and Cleveland.

Veteran area drummer Weidenfeld is a music instructor at the School of Rock North Palm Beach, providing symmetry and a glue-like rhythmic foundation à la Wilk. And as a front man, what Mandel lacks in the look of de la Rocha, who’s of Mexican-American heritage, he more than makes up for with his vocal range, energizing presence, and snarl.

‘Inevitably, you’re going to hear someone in the crowd say, ‘OMG, these guys sound just like Rage,’” says Gary Boileau, a fan from West Palm Beach. “But what brings it home is the genuine intensity Alex, as Zack, brings to the stage.”

“I’ve seen them at least 10 times and it just never gets old,” adds Ken Prather from Boynton Beach. “A spot-on tribute to Rage Against the Machine and an absolute must-see band.”

Crocker, who works by day for Florida Power & Light, has arguably as big a challenge as Mandel in his mimicry of Morello, the Harvard-educated Rage guitarist. He was the reason for the disclaimer of “No samples, keyboards or synthesizers used in the making of this recording” on the band’s 1992 self-titled debut, which featured Malcolm Browne’s Pulitzer Prize-winning 1963 cover photo of Vietnamese Buddhist monk Thich Quang Duc burning himself to death in Saigon to protest the persecution of Buddhists by the South Vietnamese government.

As for Rucker, his long dreadlocks practically qualify as a fifth band member on stage. He’s constantly moving, and those locks often stretch out two feet as he flails about, obscuring anything behind them while he recreates the impactful bass lines of the neatly shorn Commerford.

“We’re not a look-alike band,” says Rucker. “We’re more of a close-your-eyes re-creation. Offstage, we can be four of the nicest guys you’d ever meet. But when we get onstage, we instantly get into that raging mentality.”

Recent set lists found the quartet re-creating Rage’s debut in its near-entirety, including anthemic numbers like “Bombtrack,” “Killing in the Name,” “Take the Power Back,” “Bullet in the Head,” and “Freedom.”

Rage’s sophomore recording, Evil Empire (1996), proved a herculean effort in not being a let-down after that bombastic debut, and Products of Rage pays homage through tracks like “People of the Sun,” “Bulls On Parade,” “Vietnow,” and “Down Rodeo.” The Battle of Los Angeles anthems include “Testify,” “Guerrilla Radio,” “Sleep Now in the Fire,” and “Calm Like a Bomb.” From the Renegades covers release, the MC5’s “Kick Out the Jams” and Afrika Bambaataa’s “Renegades of Funk” showcase Rage’s mix of rock attitude and funk ethic.

Since Rage’s breakup in 2000, de la Rocha and Morello have embarked on solo careers, with the guitarist’s being the most high-profile through his ongoing folk music alter-ego, The Nightwatchman, and his intermittent work with Bruce Springsteen.

But Morello, Commerford and Wilk have also functioned as a unit with post-Rage acts such as Audioslave (from 2001 to 2017, when its leather-lunged former Soundgarden singer/guitarist Chris Cornell committed suicide) and Prophets of Rage (which also featured Cypress Hill vocalist B-Real and Public Enemy vocalist Chuck D and turntable artist DJ Lord from 2016-2019). With only 33 recorded album originals, plus 12 covers and a handful of B-sides and soundtrack efforts, the Rage catalog is limited enough that Products of Rage already performs a significant portion of it.

Given that Mandel, with his long, dark hair, actually looks more like Cornell than de la Rocha, perhaps that’s a logical reason that Products of Rage is branching into post-Rage terrain.

“We tried an Audioslave tune live recently,” Rucker says. “‘Cochise,’ from the band’s first album, and people dug it. Our first gig ever four years ago was at Propaganda in Lake Worth Beach, and when we play there in September, it’ll be with an awesome South Florida tribute act to Chris Cornell called Audioecho. So in addition to being a homecoming show for us, it’ll be a full experience of influential music.”

As for the reasons for the Rage breakup, rumors have flown beyond the stated “creative differences,” even including sexuality. Morello has been quoted that the four often fought, sometimes even physically, over every decision, including T-shirt patterns.

De la Rocha’s anti-authoritarian, anti-supremacist and anti-capitalist lyrics, many directed against the policies of then-President Bill Clinton, make one wonder what they would’ve sounded like on any new material over the past five years.

Examples are, “So-called facts are fraud/They want us to allege and pledge/And bow down to their God” (from “Take the Power Back”), “I’m rollin’ down Rodeo with a shotgun/These people ain’t seen a brown-skinned man since their grandparents bought one” (“Down Rodeo”), and “So raise your fists and march around/Don’t dare take what you need/I’ll jail and bury those committed/And smother the rest in greed” (“Sleep Now in the Fire”).

Yet millionaires raging against a system that helped them reach that status presented interesting internal dichotomies, even as Rage donated ample amounts to charitable organizations that they espoused.

And Commerford, no shrinking violet, went against the advice of both de la Rocha and Morello at the 2000 MTV Video Music Awards ceremony, climbing the scaffolding of the set after Limp Bizkit won for “Best Rock Video” and subsequently getting sentenced to a night in jail. Six weeks later, de la Rocha announced his departure.

The four members of Products of Rage are also involved with other musical projects, and instruments. Mandel is obviously a formidable drummer as well as vocalist, and Rucker a guitarist as well as bassist.

“We’re all session dudes, and Alex and I do some private teaching,” he says. “I recently had an awesome opportunity to work with Steve Albini [the producer/engineer whose thousands of credits include Nirvana, Cheap Trick, The Pixies, PJ Harvey, and Robert Plant and Jimmy Page]. I’d recorded some demos, and somehow they got into his hands. I got a confirmation email, but I couldn’t really believe it was happening until I set foot in his studio in Chicago. Our drummer, Ryan, is also involved in the project. We’re going back there in October to mix the material. I’m not sure how it’ll be released yet, but it was all recorded on analog reel-to-reel tape for that warm, throwback sound; nothing digital. I’m really excited about it.”

A Lake Worth Beach resident, Rucker’s main regret is that he couldn’t attend any of the multiple shows that Rage performed in South Florida through the 1990s. But he has hopes for the band’s delayed reunion tour, scheduled to start in late March of 2022, although no area dates are listed.

“I’ve never seen them live,” he says, “and I missed an opportunity to see Prophets of Rage in 2016 as well. Prior to the pandemic, I was going to visit friends in Canada and planned to see Rage on their reunion tour up there. Then we ended up all having to stay home, and I couldn’t even travel to Canada anyway. But we’re talking about having a band field trip next year if necessary, so I can finally witness them. For now, playing their music is as close to that experience as I can get.”

Film: Playwright August Wilson began his chronicle of the African-American experience throughout the … END_OF_DOCUMENT_TOKEN_TO_BE_REPLACED

Film: Just in time with the opening of movie theaters in Palm Beach County comes the season’s most … END_OF_DOCUMENT_TOKEN_TO_BE_REPLACED

Music: The very last concert Franz Joseph Haydn attended in his life was in March 1808, about a year … END_OF_DOCUMENT_TOKEN_TO_BE_REPLACED