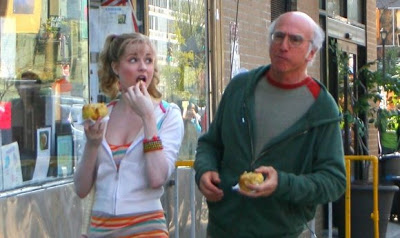 You would not need to know that Woody Allen first wrote the screenplay for his latest film, Whatever Works, more than 30 years ago to recognize it as a refreshing throwback.

To say that the past decade or so have been artistically fallow for Allen, despite the arrival of at least one movie a year, would be an understatement. To those of us who feel Allen has made some great films (Crimes and Misdemeanors, Annie Hall, Hannah and Her Sisters, Purple Rose of Cairo, to name a few), watching his recent empty, half-hearted efforts has been disheartening.

But if he cannot be comically profound, he might as well simply be funny. Whatever Works, the tale of a deeply pessimistic man (Curb Your Enthusiasm’s Larry David) who is transformed by the arrival of a dumb Southern blonde (Evan Rachel Wood) in his life, does not have much to ponder. But it is funny, in a familiar, jokey way that is reminiscent of Allen’s early career.

On our first glimpse of Boris Yellnikov, an erudite physicist who claims to have “almost won the Nobel Prize,” he is arguing with and insulting his best friends. He is an off-putting character and David never tries to endear him to us. His world view is that everyone else is beneath him and life is meaningless, so he might as well do whatever works to minimize the misery. In his case, that means attempting suicide by jumping out his apartment window, a failed effort that leaves him with a decided limp.

Divorced, alone and resigned to it, he is taken aback by the arrival of a tired and hungry nubile shiksa from Alabama, Melody St. Ann Celestine (Wood), on his doorstep. Reluctantly and terribly out of character, he takes her in. Very much in character, he flaunts his intelligence, insults her for her lack of education, then gradually becomes her Henry Higgins.

He takes her on as a project in enlightenment, introducing her to the finer things of New York life: obscure movies, great Chinese food, etc. And like Higgins, at least in My Fair Lady, Boris falls for Melody and — not unlike every other improbable thing that happens in this movie — they marry.

Allen’s most recent films have taken place in England and Spain, but Whatever Works marks his return to his native New York, arguably a significant factor in his return to form. Certainly this is another valentine to the city, which is a catalyst for each arriving character’s transformation.

Melody’s disapproving, Christian fundamentalist mother Marietta (Patricia Clarkson) enters the picture, scowls suspiciously at Boris, but soon loosens up to the point of moving in with two of Boris’s buddies and becoming a bohemian artist. Similarly, her dad (Ed Begley Jr.), who had strayed from his marriage, ventures to New York, wanders into a bar and makes a discovery about his sexual orientation.

Allen originally wrote Whatever Works for his co-star from 1976’s The Front, Zero Mostel, but the role fits David’s screen persona snugly. Wood has shown her dramatic chops in such films as Thirteen, Down in the Valley and The Wrestler, but here reveals an unexpected facility for comedy with her take on airheaded innocence.

Whatever Works was written around the same time as Manhattan and is further evidence of Allen’s fixation with inappropriately young women. Here’s hoping he has more roles for Wood. After all, Scarlett Johansson is already over-the-hill by his standards at 24.

Whatever Works does not add up to much, other than a healthy laugh quotient, but that is a refreshing change from his latest output. While we wait for something more weighty from Woody, he should return to his files and pull out whatever else works from his unproduced screenplays.

Film: Playwright August Wilson began his chronicle of the African-American experience throughout the … END_OF_DOCUMENT_TOKEN_TO_BE_REPLACED

Film: Just in time with the opening of movie theaters in Palm Beach County comes the season’s most … END_OF_DOCUMENT_TOKEN_TO_BE_REPLACED

Music: The very last concert Franz Joseph Haydn attended in his life was in March 1808, about a year … END_OF_DOCUMENT_TOKEN_TO_BE_REPLACED