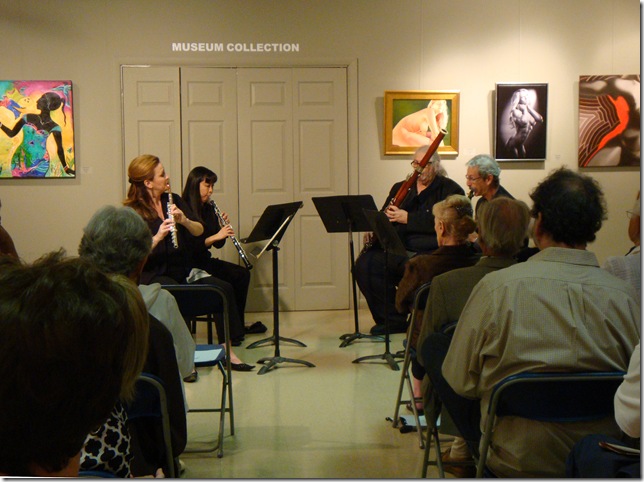 The composers of the so-called Boston School, with the exception of Leonard Bernstein, are not well-known today, which is unfortunately par for the course for American classical composition in general.

But one good reason to know the music of at least one other of the Boston composers, Arthur Berger (1912-2003), could have been heard Saturday night at the Lighthouse ArtCenter in Tequesta, where the Palm Beach Chamber Music Festival musicians gave a concert featuring Berger’s music on the second program of their winter series.

Berger’s Woodwind Quartet, written in 1941 for the musicians of the San Francisco Symphony while Berger was teaching at Mills College, is a good example of the composer’s early style, which was highly influenced by the neoclassicism of Igor Stravinsky. Elegant and attractive, it is composed with scrupulous care and a thorough understanding of the capabilities of the instruments.

The four performers at the well-attended concert Saturday night — flutist Karen Dixon, oboist Erika Yamada, clarinetist Michael Forte and bassoonist Michael Ellert — gave a strong account of the quartet, blending admirably well in the ArtCenter gallery, which is well-suited for the four instruments. One only wished for a bit more lightness; at times there was a deliberateness to the performance that detracted somewhat from the music’s basic wit.

Still, overall it was a reading to be admired, from the way the players tossed the bubbly lines of the first movement from one to another, to Yamada’s big-toned oboe in the Milhaud pastorale-like second movement, to the crisp high spirits of the finale, with its race to the finish line and wink of an ending. It was most enlightening to hear this little American gem played well, and it’s to be hoped that audience members unfamiliar with Berger’s work will seek out other pieces of his.

The concert opened with another woodwind quartet, that of the 20th-century French composer and radio programmer Claude Arrieu, pen name of Louise-Marie Simon (1903-1990). Arrieu’s Suite en quatre makes a nice pairing with the Berger quartet, though Arrieu’s piece, written in 1979, is more magpie-like from the perspective of style.

The first movement, for example, alternates a clever chromatic theme in flute and oboe with a two-note answer in the clarinet to open, then transitions to a full-voiced piece of Renaissance-flavored processional music, and then to a faster, whimsical section that ends surprisingly on a dark minor chord.

The dancy, jazzy second movement had a nice bluesy passage for Forte, and in the slow third movement, each of the players had a chance to add some color to the music’s warm expressivity; the four players balanced the sound admirably well in a room well-suited for them. The finale, wittiest of all, has at its heart a charming little march tune that carries the piece to a lighthearted ending.

Like the Berger, the Arrieu was played with polish and verve, and both pieces would do well on the long-delayed next installment of the Palm Beach Chamber Music Festival’s series of recordings.

The other two pieces on Saturday night’s program were for strings, beginning with the first movement of Beethoven’s so-called Eyeglasses Duet for viola and cello, a work composed early in Beethoven’s career. It’s remarkable all the musical variety that Beethoven is able to get out of just two string instruments, and when well-played it makes a strong impression.

Saturday night’s performers were violist Rebecca Diderrich and cellist Ashley Garritson, both of whom played well from a solo and an ensemble standpoint. The key change after the exposition was a little shaky entrance-wise, and there could have been some more subtlety here and there, such as in the unison motto just before the recap. But overall, this was a strong and engaging performance.

The concert closed with the only complete string trio of Schubert (in B-flat, D. 581), written in 1817 when the composer was just out of his teens. For this work, Diderrich and Garritson were joined by violinist Mei Mei Luo. Schubert’s writing here is more like Mozart in its exposed format that quickly shows up rhythmic inaccuracies, among other things; it is far more difficult than it looks (not that it looks particularly easy), and the hardest thing about it is the precision it requires. Everything has to be just-so, or the music doesn’t quite work.

And while this performance was often highly emotive and lovely, it had a basic off-centeredness because it wasn’t precise. The basic tempo of the graceful first movement, for instance, proved to be a little too fast when it came to the last bars, which have three very fast arpeggios in the three instruments that were blurry rather than elegant flourishes.

The second movement was better, with its much-repeated main theme sweetly and gently played on each of its occurrences. The minor-key middle section, which opens with a dark solo passage for cello, needed to be much more mysterious to make its full effect, and to make the contrast with the main theme that much stronger.

The third-movement Minuetto had a nice sense of drive and forward motion to it, more akin to Beethoven than Mozart, and Diderrich did a fine job with her athletic solo work in the Trio. The finale’s whistle-worthy main theme, ideal for a stroll in the Austrian countryside on a trouble-free day, is offset by a couple highly dramatic episodes that the three musicians soldiered right through, but which could have benefited from more nuance and shade.

Still, it was a good way to end the second concert of this winter festival, and a good way to whet the appetite for more Schubert in future concerts.

The third and final series of Palm Beach Chamber Music Festival concerts are set for Wednesday, Nov. 5, at the Lighthouse ArtCenter, Thursday, Nov. 6, at the Amarnick-Goldstein Concert Hall on the campus of Lynn University in Boca Raton, and on Friday, Nov. 7, at St. Andrew’s Episcopal Church in Lake Worth. On the program is a world premiere of Century Souvenirs, a wind quintet by Boca Raton composer Marshall Turkin, a wind quintet by George Onslow (in F, Op. 81, No. 3) and the Piano Trio No. 1 (in D minor, Op. 49), of Felix Mendelssohn. All concerts are $25, and start at 7:30 p.m. Call 800-330-6874 or visit www.pbcmf.org.

Film: Playwright August Wilson began his chronicle of the African-American experience throughout the … END_OF_DOCUMENT_TOKEN_TO_BE_REPLACED

Film: Just in time with the opening of movie theaters in Palm Beach County comes the season’s most … END_OF_DOCUMENT_TOKEN_TO_BE_REPLACED

Music: The very last concert Franz Joseph Haydn attended in his life was in March 1808, about a year … END_OF_DOCUMENT_TOKEN_TO_BE_REPLACED