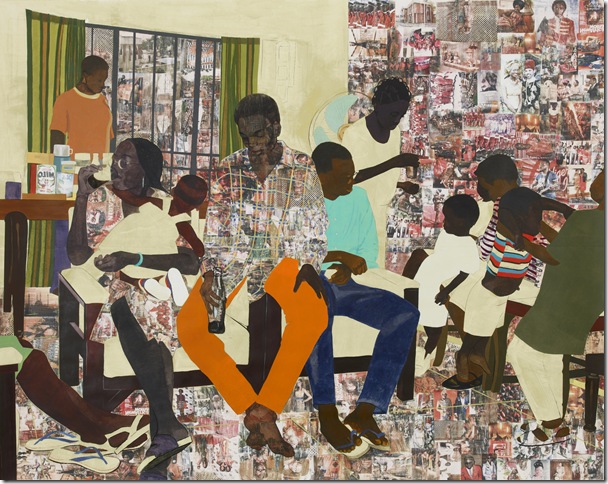 It isn’t often that an artist comes along who says something new in an original way. But that’s just what Nigerian-born artist Njideka Akunyili Crosby has done. Her colorful mixed-media artwork makes big statements about the dualities of life, while intriguing the eye with their abstract structure and decorative rivers of transfer prints.

Each monumentally sized painting lets the viewer glimpse a special moment — usually in a domestic scene where people are meeting, talking, or just reflecting, in a setting from the country of Crosby’s birth, Nigeria. It’s almost as if the viewer were spying on the people — or a room waiting for people to arrive — in the same way Vermeer let us glimpse his wealthy patrons at home in the 17th century.

The Norton Museum is offering an exceptional opportunity to see the first survey exhibition of Crosby’s work. Titled I Refuse to Be Invisible, this exhibition features 16 large-scale, early and recent mixed-media works made up of painted and collaged elements on paper. It is a major achievement for Cheryl Brutvan, the Norton’s curator of contemporary art, who identified this 33-year old rising star and brought her to West Palm Beach. Crosby is the youngest artist to receive the Norton’s Recognition of Art by Women (RAW) award that began in 2011 and was made possible by the Leonard and Sophie Davis/MLDauray Arts Initiative. The Crosby exhibit runs through April 24.

The depth inherent in Crosby’s work is immediately apparent in Nwantinti (2012), a painting named after a love song from Crosby’s youth. You will find the painting on the left wall as you walk into the exhibition. It shows a man sprawled out on his back on a bed, relaxing, with his head in a woman’s lap. We are watching one of those special, private moments Vermeer captured so many centuries ago. Everything is silent. The canvas is almost entirely red and black except for the blue in the transfers — the small pieces of fabric and paper that ripple through the painting almost like a river toward the back of the room. It’s actually a self-portrait of Crosby and her husband, Justin Crosby, who is white, and expresses the duality Crosby strives to achieve on many different levels — in this case, race, gender, and cultural background, to name just a few. 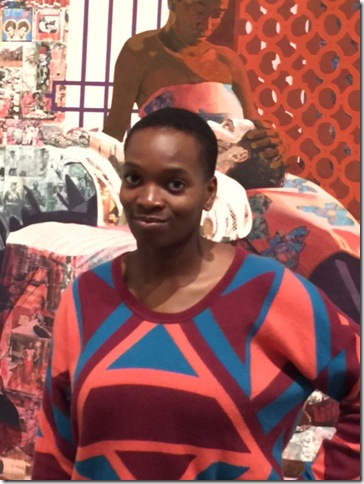 “The idea of dualities comes up on so many levels,” says Crosby. “In spaces and movement. With movement and people, I want you to get a glimpse into something that’s happening.”

Crosby achieves this goal in virtually all her paintings, even the still life further to the left, Tea Time in New Haven, Enugu (2013). It shows a room with a table set for a teatime meal waiting for the guests to arrive. Two other paintings that illustrate this feeling of immediacy are: The center panel of the triptypch on the back wall of the room, and the painting of Crosby dancing with her husband.

The exhibition title — I Refuse to Be Invisible — is taken from the title of the 2010 dance painting. At first, that painting looks so abstract that it takes a minute to identify both Crosby and her husband. The vividness of the colors makes the paler parts of the painting fade into the background; so it’s hard to tell just who is invisible.

The center panel of the triptych on the back wall also contains a scene that makes you feel you are watching a private, but important moment. It was inspired by the first time Crosby’s husband met her family in Nigeria. In it the family is sitting around a table casually, and a standing woman looks down at her husband. You see concern and tenderness in her glance. This painting is entitled I Still Face You (2015).

Crosby’s artwork takes traditions of classical Western academic art and combines them with so many other media techniques and Nigerian settings that it almost seems as if she has created a new visual language. That language includes some photorealism, since her figures are originally photographed. She poses models carefully and then arranges the figures she has selected on her canvas in a way that tells the story she wants to tell, combining the bigger shapes with transfers of paper and cloth, frequently a special kind of Nigerian cloth with portraits printed on it. This combination gives her paintings unique visual impact — an abstract quality from afar, an emotional revelation when looked at more closely, and multiple additional stories that unfold when you examine the pieces of transfer printing up close. 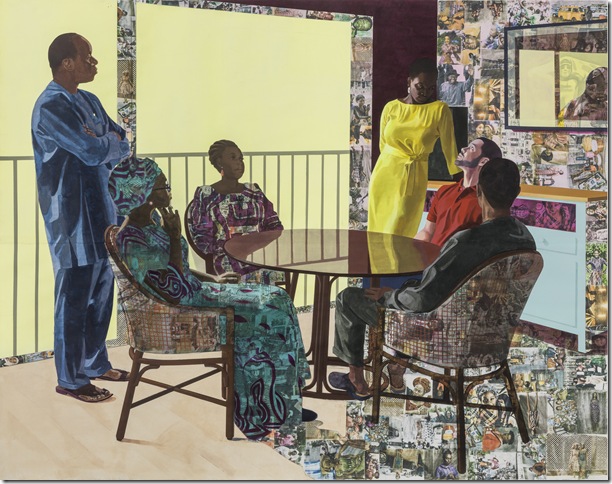 I Still Face You (2015) by Njideka Akunyili Crosby.

With this unusual technique, Crosby is able to captures a variety of dualities drawn from her own memories of Nigeria combined with elements of her life in the West. She reaches for a new level of visual communication, which the colonial theorist Homi B. Bhabha has called “the third space” — a point of overlap and mixing of cultural influences specific to diaspora communities.

Her paintings show not just the dualities between men and women, one country and the other, but also social class, and political oppression. Deep disappointment over the recent history of Nigeria comes into focus in the two paintings on view from her series “The Beautyful Ones.” Despite being the largest country in Africa (by population), Nigeria did not achieve independence from its colonial rulers until 1960. That event was followed by years of political corruption and turmoil, much to the disappointment of those of Crosby’s own generation and that of her parents.

The two wistful-looking girls in the paintings are two of Crosby’s sisters at an earlier age. The title of the series comes from a popular West African novel, The Beautyful Ones Are Not Yet Born by Ghanaian writer Ayi Kwei Armah. It’s hard to tell if Crosby believes these young people are part of a new generation that will be considered “beautiful” or still part of one disappointed, and still struggling against violence and corruption.

Crosby herself has both transcended her origins and built on them. She comes from the city of Enugu, in Enugu state, which is in southeastern Nigeria. Her family started out poor with six children. But when she was in her teens her mother got a job in Lagos, the financial capital of the country, where Crosby attended a private school. 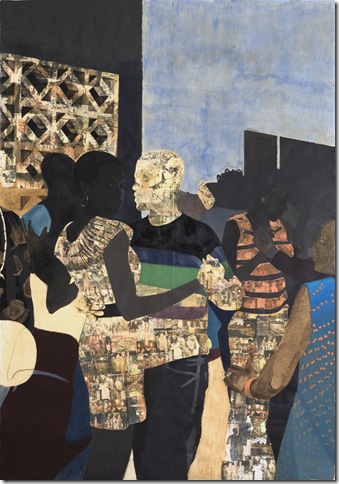 When she was 17, she came to the United States and to attend Swarthmore College, the Pennsylvania Academy of Art and then the Yale University School of Art. It wasn’t until she began studying with Randall Exon at the Pennsylvania School of Art that she definitely decided to devote her life exclusively to art. Before that she had considered becoming a doctor as had three of her siblings.

“I took multiple classes with him,” Crosby explains. “I saw that this was possible, not just a hobby… And I realized that the starving artist was a myth.”

“I also realized that by being an artist I could be a person who makes a difference,” she adds. This is certainly what her art does — not just through its beauty, but also in the way it conveys multiple messages. It looks deep inside the souls of people to get to their essence in a way not found in much of today’s representational art.

Crosby says that every time she creates a new painting, she wants to conquer a new challenge. She wants to build on traditional figurative painting to find a voice of her own and go as far as she can. Why does she use so many techniques? Photography, acrylic, oil, collage, transfer prints?

“Form follows content,” she explains, “I place different elements where they should be and they all come together.”

Film: Playwright August Wilson began his chronicle of the African-American experience throughout the … END_OF_DOCUMENT_TOKEN_TO_BE_REPLACED

Film: Just in time with the opening of movie theaters in Palm Beach County comes the season’s most … END_OF_DOCUMENT_TOKEN_TO_BE_REPLACED

Music: The very last concert Franz Joseph Haydn attended in his life was in March 1808, about a year … END_OF_DOCUMENT_TOKEN_TO_BE_REPLACED