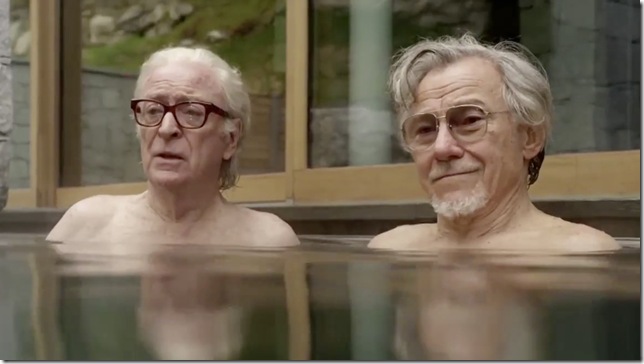 There is virtually no story in Paolo Sorrentino’s Youth, and it hardly matters. Cinematic visions this grandiose and immaculately composed don’t come but once a year, and Sorrentino is usually the one to deliver them.

Sorrentino established his legacy as the heir to sumptuous late-period Fellini with the 2013 Oscar winner The Great Beauty. That movie’s depiction of wealthy European ragers continues in Youth, a companion piece about the twilight of cultural gods — in this case a retired composer of world renown (Michael Caine) and his best friend, an aging filmmaker working on his final big-screen testament (Harvey Keitel).

But the main character is the location, where they spend the movie’s length in philosophic exile: the five-star Waldhaus Flims resort in the Swiss Alps, a hotel as busy and quirkily populated as the Grand Budapest. It’s here that Buddhists levitate, pop singers lip-synch on spinning platforms, and sheiks and czars share restaurant space with masked BDSM adherents and ossified senior citizens one step away from rigor mortis. A morbidly obese Argentine footballer lounges by the pool, and Miss Universe drops by for some in-the-buff bathing. Sorrentino’s canvas is a beautiful freak show, his images suggesting glossy advertisements in luxury magazines — if they were half-populated by Diane Arbus subjects.

If Fellini’s circusy ostentation is the most obvious influence on this plotless ramble, subtler, diverging styles emerge and compete. The visual gags, surrealist stunts and holiday locale recall Jacques Tati’s Monsieur Hulot series, and Youth contains enough deadpan meditations on mortality to conjure the black comedies of Roy Andersson. The final meandering mix, however, is definitively Sorrentinan, in all of its polarizing, self-indulgent whimsy.

Caine’s Fred Ballinger is the nominal protagonist, a cantankerous celebrity who would love nothing more than to recede into oblivion. His wife and muse has long passed, and with it his desire to work, yet publishers perennially hector him about writing his memoirs, and an emissary from Queen Elizabeth II drops by the Waldhaus to convince the recalcitrant composer to conduct his most famous piece for Prince Philip’s birthday celebration.

Meanwhile, Keitel’s Mick Boyle and his young screenwriters brainstorm an ending to his cinematic swan song, a process interrupted by a portentous appearance from his longtime leading lady, Brenda Morel (Jane Fonda, in untouchable diva mode). Mostly, though, Fred and Mick just wander the grounds or recline under the stars, discussing old-man stuff like the frequency of their urination. They are the natural anchors in a decidedly unnatural setting.

Like an attentive party host, Sorrentino bounces among the resort’s guests with an anthropologic curiosity, including Fred’s daughter and manager Lena (Rachel Weisz), whose breakup with her boyfriend is visualized as a hellacious-salacious pop-video nightmare; and Paul Dano’s Jimmy Tree, an actor striving to be accepted as a serious artist who, at one point, dons a Hitler costume in preparation for an ill-advised role.

The director’s unorthodox approach yields some unforgettable sequences. In a moment of creative crisis, the female protagonists of Mick’s extensive filmography congregate on a field in full regalia, spouting Mick’s dialogue back to him, like something out of Fellini by way of Woody Allen. In Fred’s moment of existential reflection, he conducts a nature symphony from a field of cows, creating color from their mooing, their bells, the buzzing insects, a flock of birds.

It’s just one example of the film’s audacious approach to sound: Sorrentino’s soundtrack employs mournful guitar elegies by the singer-songwriter Mark Kozelek, operatic arias, dance music and the harmonic clangor of a room full of cuckoo clocks, just for the hell of it. He even generates grating, rhythmic musicality from Fred’s handling of a candy wrapper.

What comes of this inventive mélange? I’m not sure even Sorrentino knows. Such broad-ranging subjects as love, life, parenthood and the failings of memory are addressed in fits and spurts, none of them explored with enough depth or satisfaction to drive home a theme or a point of view. All of the constituent parts strain for a sum, and as Youth wanders toward closure, it runs out of gas. But in a vehicle this beautiful, I’m content to just bask in its warmth and enjoy the stasis.

Film: Playwright August Wilson began his chronicle of the African-American experience throughout the … END_OF_DOCUMENT_TOKEN_TO_BE_REPLACED

Film: Just in time with the opening of movie theaters in Palm Beach County comes the season’s most … END_OF_DOCUMENT_TOKEN_TO_BE_REPLACED

Music: The very last concert Franz Joseph Haydn attended in his life was in March 1808, about a year … END_OF_DOCUMENT_TOKEN_TO_BE_REPLACED