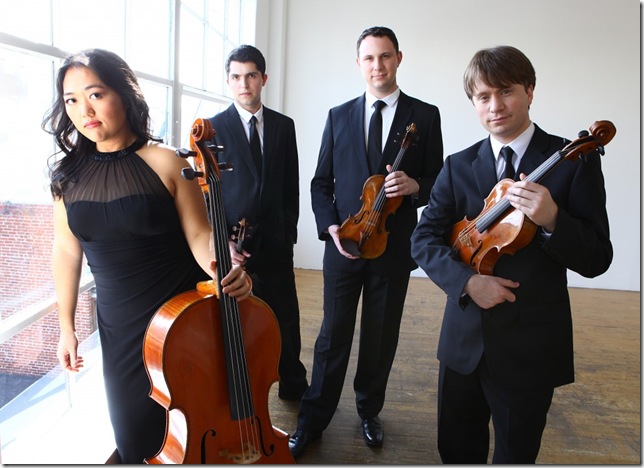 Four young student string players met at the Colburn Conservatory of Music in Los Angeles in 2010 and decided to form the Calidore String Quartet. They quickly won four American grand prize competitions, and the Munich and Hamburg equivalents in 2012.

On Feb. 3, the Flagler Museum music series was host to their winning ways. All in their mid-20s, it was appropriate that the Calidore members should choose to play two of their three string quartets by youthful composers. First, Mozart, composed when he was 16; then Mendelssohn at 18, with a third quartet by Beethoven, written when he was a mature but anxious 35-year-old.

Mozart’s Divertimento in F major (K. 138) opened the Calidore concert with a brightness of tone, clean and crisp, not heard recently at these concerts, reflecting their all-American genial style. Smartly dressed, not a hair out of place, they attacked the young Mozart’s singsong music of the Allegro with animated glee. The Andante moved along at a slow walking pace with the cello, an 1860 Charles Jacquot played by Estelle Choi, sounding wonderful in rooting the other three strings as Mozart has them floating above her accompaniment.

In the Presto they were united in their attack, moving the piece along at a ferocious speed. These lively tunes were over all too quickly. As a warmup for what was to come, their choice of Mozart was ideal.

Mendelssohn’s String Quartet No. 2 (in A minor, Op. 13) was composed in 1827. It was the first piece this group ever played together and therefore had enormous significance for them, Choi told the audience. It also had significance for the young composer since he chose to give it a subtitle: Ist es Wahr? (Is it true?), a question posed to his sweetheart asking if she really loved him.

Mendelssohn’s musical imagination and craftsmanship comes across admirably. The piece is richly textured and the Calidore gave it a refined interpretation. The Allegro vivace opens with some difficult passages tackled nicely by lead violinist Jeffrey Myers. His facial grimaces showed the intensity of the composition as he demonstrated his fine playing skills. The Adagio non lento begins eloquently with an introduced fugue that enters in a most unusual and unreal pianissimo. The development reflects Beethoven’s influence over Mendelssohn as the intensity gets louder, only to be followed by a reflective passage, prayer-like in its mysticism, in which second violinist Ryan Meehan shone.

The Allegretto con moto begins with a lilting tune on the first violin accompanied by a pizzicato theme from the other three strings. In Mendelssohn’s best elfin style the music dances along, reminiscent of his Midsummer Night’s Dream scherzo composed the year before. Turning back to the opening melody of this movement the first violin is now much more dominant, beautifully played by Myers as the others join him in the closing last few bars which were exquisitely and delicately delivered by all four musicians.

The Presto is like a wakeup call from the last movement’s reveries. A solid chord breaks the charm followed by rapid scales, fugues and rushing octaves. It’s as if Mendelssohn is galloping to see his true love. Here there was dynamic playing in the development —Dream-type music again — and the repeated question, Is it true, appears on the first violin, like a cri de coeur, because Mendelssohn cannot let it go.  A very warm reception greeted these four young players as the audience stood to applaud their fine efforts.

Beethoven’s String Quartet No. 8 (in E minor, Opus 59, No. 2) was written at a very fertile time in his life, 1805 and 1806, when he also wrote his only opera, Fidelio, the Appassionata piano sonata, the Piano Concerto No. 4, his Violin Concerto, two of the Leonore overtures and his Fourth Symphony. The quartet is dedicated to Russian Count Andrei Rasumovsky, a keen financial supporter, who asked Beethoven to include “some Russian melodies,” which he did.

It begins with two great rousing chords at the start of the exposition of the first movement. The themes are repeated often with eloquent pauses which are as integral to the music as the notes themselves. Beethoven builds to a massive crescendo followed by an intimate tune. The Calidore got so much meaning into this section with their exquisite playing.

A long melodic line opens the Molto adagio; its sentimentality at first is a little cloying. Next the music becomes ethereal and drawn out in heavenly phrases. The tranquility is broken by a small pained sustained few bars of agitated phrases. A four-note cello accompaniment over long harmonic chords from the top three strings brings about a dying off effect to end the movement.

The Scherzo begins earnestly. Dance like tunes appear. Beethoven introduces a restless capricious rhythmic subject. Each player picks up the tune, some distinctive modal figurations are introduced from the viola, nicely played by Jeremy Berry. We hear the Russian folk song Slava, which gets louder each time it is played.

A fugue like theme ends the movement quietly. The Presto closes this quartet with a dazzlingly brilliant rondo-sonata. Its high spirited theme with relentless dotted rhythms reflects the sunny character of our four young players and the California sun they studied under. There was a unifying sensitiveness in their attention to detail as this movement sped to its end. Rapturous applause led to an encore, the Adagio of Haydn’s Opus 20, No 5.

The Calidore is on a busy tour that takes them back to California this week and then to Germany and Britain in the weeks after. This summer, they’ll appear at Music Mountain in Falls Village, Conn. If you get a chance, and you missed them at the Flagler, make sure you see them.

The Fine Arts Quartet is next up in the Flagler series, with a concert at 7:30 p.m. Tuesday, Feb. 17. The program includes the Quartet No. 18 (in A, K. 464) of Mozart, and the Second Quartet (in F, Op. 22) of Tchaikovsky. Tickets, which include complimentary champagne and refreshments after the concert, are $70. Call 655-2833 or visit www.flaglermuseum.us.

Film: Playwright August Wilson began his chronicle of the African-American experience throughout the … END_OF_DOCUMENT_TOKEN_TO_BE_REPLACED

Film: Just in time with the opening of movie theaters in Palm Beach County comes the season’s most … END_OF_DOCUMENT_TOKEN_TO_BE_REPLACED

Music: The very last concert Franz Joseph Haydn attended in his life was in March 1808, about a year … END_OF_DOCUMENT_TOKEN_TO_BE_REPLACED