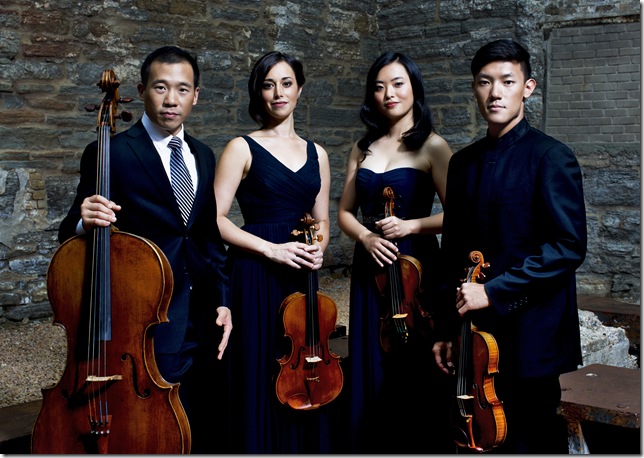 Running out of superlatives to describe the Parker Quartet is a hazard music critics must face after hearing their excellent performances. Tuesday saw them at The Flagler Museum at Whitehall in its music series season opener, which was sold out.

Is it any wonder the public takes a liking to them after experiencing the ho-hum attitude presented by some of the older established groups who stand around expecting appreciation?

These young artists work hard to earn respect. Formed in 2002 they’ve already won a Grammy, the Bordeaux International String Quartet Competition, the Concert Artists Guild Competition, the Cleveland Quartet Award, and this year they joined the music faculty of Harvard University as artists-in-residence.

The Flagler is becoming known as one of the finest chamber music venues in South Florida, and it was to its great West Hall that the Parker brought their amazing talents starting with a tiny unfinished piece by Franz Schubert, his Quartettsatz (D. 703) — which means “quartet movement,” of which there are only two.

In 1820, Schubert began this quartet in C minor completing the first part (Allegro assai) but only 41 measures of the second movement, marked Andante. The Parker gave it a lovely reading, with their incredibly mellow balanced sound; its lead violinist, Daniel Chong, rivals the best concertizing violinists around today. It is lyrical Schubert, writer of so many art songs, a few of which he crams into the first movement for our enjoyment. I was impressed with how well the four players work together, reminding me of four steel railway wheels whose ball bearings have been well oiled before a journey.

Mozart’s Quartet No. 15 (in D minor, K. 421) quickly followed the Schubert. It is one of the six quartets Mozart sent to Haydn, the man who developed the string quartet form. In the dedication he asks Haydn to accept them as his sons, and Mozart hopes that Haydn will continue his generous friendship.

The first phase of the Allegro has three elements, the violin’s melody, the cello’s descending scale and the other two instruments’ rhythmic notes. The Parkers’ playing was joyful perfection. Each artist freely expressed himself and herself swaying in time with the music, almost in abandon, their very bodies elastically plying the music.

In the Andante, taken very slow, one could only think how much practice these four young people had put into their preparation. One could also see why it was taken far slower than the normal andante (walking pace), since at their tempo it emphasizes the beauty of Mozart’s lilting melodies. The Minuet was melancholy until the first violin introduces a polka-like theme in which Chong made his violin sing.

Last was the Allegretto, a rocking tune with variations to follow. We heard some exquisite playing from the quartet in the offbeat section as it turns dark. The viola of Jessica Bodner nicely led a new variation to a major change in key, with lovely stresses on each third note and a skipping melody to end the work.

After intermission, Mendelssohn’s String Quartet No. 5 (in E-flat, Op. 44, No. 3) was the challenge. This quartet was completed in 1838 when Mendelssohn reached 29. It begins belligerently, marked Allegro vivace, and it was taken at a very fast clip. A four-note theme repeats often at a hectic pace. I sensed a bit of a roughness at the start from the other three, who were trying to keep up with Chong. Despite all this dashing frantic music, they managed to end together.

The Scherzo, next, sounded so like Mendelssohn with its light runs, dizzying twists and turns. A few “little fugues” that have great charm also are introduced. Thought by some to be his best scherzo, it ends with the players sounding like a swarm of bees searching for hive. And yes, one is reminded of his other famous scherzo from the incidental music to A Midsummer Night’s Dream, which he wrote when he was much younger.

In the beauty of the Adagio non troppo, the third movement, each instrument blended well even in the written “dissonances,” reminding us that this is truly a talented quartet. Chong gave it his all, concertante style, with good support from the others. It ends in emotive depth with some very smooth playing from everyone. Taking a short break before tackling the last movement, marked Molto allegro con fuoco, Chong licked his left thumb, let out a mild sigh and launched into the familiar opening. He came across with virtuoso playing of a very high order.

Toward the end, there were a couple of ragged passages, and some runs that got a bit fuzzy — so forgivable in view of all their hard work and their marvelous playing — and tiredness was evident.

Returning for three well-earned bows the Parkers rightly turned deaf ears to cries of “encore.” They had given their all and that was more than enough. I shall take away a good memory of their pleasant professional attitude and the youthful swaying in time with the music as they played.

The Aspen String Trio performs next on the Flagler Museum series, in a concert set for 7:30 pm Tuesday, Jan. 20. Music by Beethoven, Mozart and Richard Strauss is on the program. Tickets are $70, which includes a complimentary champagne-and-refreshments reception after the concert. Call 561-655-2833 or visit www.flaglermuseum.us.

Film: Playwright August Wilson began his chronicle of the African-American experience throughout the … END_OF_DOCUMENT_TOKEN_TO_BE_REPLACED

Film: Just in time with the opening of movie theaters in Palm Beach County comes the season’s most … END_OF_DOCUMENT_TOKEN_TO_BE_REPLACED

Music: The very last concert Franz Joseph Haydn attended in his life was in March 1808, about a year … END_OF_DOCUMENT_TOKEN_TO_BE_REPLACED