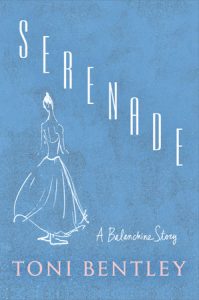 When I started reading Toni Bentley’s Serenade: A Balanchine Story, I wasn’t sure what to make of it. In fact, I wasn’t sure that I was going to continue reading it. I had my suspicion that the tone might be overly reverent, as Bentley was young and impressionable when she joined the ranks of New York City Ballet and was chosen by master choreographer George Balanchine to dance in his most celebrated ballet, Serenade.

The book begins with Bentley’s personal perspective of dancing for Mr. B, though in reality she had very little real personal contact with him. For too many pages, she rhapsodizes about her experience as if she were once again a shy, 17-year-old bunhead skirting around the hallways and theater wings of Lincoln Center. Bentley’s effusive writing style is at times almost too much to take. For example, when describing the pointe shoe which allows the female dancer to rise on her toes, she refers to it as “… our crusade against gravity. An unlikely wager is won inside these satin cylinders, Newton’s apple upended, cored and spun into a vertical liquid of unlikeliness.”

The ballet Serenade is truly a beautiful piece of choreography and it is undoubtedly Balanchine’s most famous work, danced by ballet companies around the world and deserves a full written exploration of it. It was the first work Balanchine created when he arrived in New York in 1934. He choreographed it for the students of his newly formed ballet school, and at the first rehearsal, 17 female students showed up, and so 17 dancers were choreographed into the striking opening.

The next day, nine were present and the following day six. So, Balanchine simply used whatever number of dancers were at rehearsal for the section being choreographed that day. Male dancers were added quite late in the work because they only showed up for rehearsal later in the process. Balanchine’s artistic process seemed born both out of necessity and a natural intuition for putting steps to music, but Bentley’s take on the creative process was reverential. “He molded a live conundrum. An aristocracy of equals, an aristocratic democracy, a democracy of aristocrats. This was Balanchine’s America.”

Bentley describes Serenade’s choreography in great detail tagging it with time stamps but, in the midst of minutely recounting every movement that Balanchine created, she takes welcome detours and interjects historical details that are crucial for understanding the evolution of the ballet but also serve as a welcome break. The long descriptions of choreography might seem endless if you are not a dancer.

Balanchine once said “I couldn’t move without a reason, and the reason is music.” In Serenade, the music — Tchaikovsky’s Serenade for Strings — and the choreography are indispensable to each other. Balanchine felt the need to keep tweaking the ballet almost until the end of his life.

The costumes took ages to get right until finally in 1952, the long pale blue chiffon dresses were introduced and in 1979, Balanchine made some additional changes to the work that were memorable. Inspired by a dancer’s fall in rehearsal, he added two startling falls into the choreography and after one, he asked the dancers to “release their tresses” from their tight buns and allow their long hair to cascade down their backs, matching the movement of the long skirts as they exited with their backs towards the audience.

I really enjoyed reading this kind of historical anecdote. At the end of the book, there is a detailed index, bibliography and reference for notes, which I used numerous times. One chapter, titled “Turnout,” was about the history of ballet in the court of the French King Louis XIV and its forgotten ballet maker, Pierre Beauchamps, who not only created the five turned-out foot positions that are the foundation of ballet but also created the first system of dance notation.

Here, Bentley’s style of writing is more tempered but not completely, as her reverence continues by injecting phrases such as classical ballet worships at “the great altar of turnout” and “… we stand, truly, with history rushing underfoot” for the moment in Serenade (at precisely 1:33) when the 17 dancers change their foot position from a pedestrian parallel to a turned-out ballet first position.

Bentley has included some fascinating tidbits of scandal — allegations of kidnapping, illegitimate children, abusive wives, suicides, drastic changes of fortune and dark secrets — and this certainly does keep the retelling of the personal histories moving along. Such as Marius Petipa, who in 1847 was charged with kidnapping a marquesa’s daughter when he ran off with her. He ended up in Russia where he became the most prolific choreographer of classical ballet and together with Tchaikovsky where responsible for creating the famous romantic full length ballets that highlighted the role of the female dancer — the ballerina.

Years later, the young Giorgi Balanchivadze was a recipient of their vast artistic heritage as he trained at the Imperial Theatre School in St. Petersburg where he was considered a dependent of Tsar Nicholas II. Though it is said that Balanchine did not care for the “white ballets,” as he called them, he did carry on the calling to immortalize the beauty and strength of women in ballet.

By many accounts, he was a modest person — “God creates, I assemble” — but Balanchine’s influence on the art form is undeniable. The legacy one leaves behind is of course a clear indication of one’s eminence in a field but Balanchine had no interest in preserving his ballets (over 450). When he died in 1983, Balanchine left no writings, no accounts and no real plans for his choreography. “I can see no need for preservation. A ballet is a movement in time and space, a living moment. Like a hothouse flower, it blooms, and dies… This is as it should be.”

Perhaps it is Bentley’s desire as a dancer to give something back to her mentor — her idol — and as an author, she can leave her mark on the ballet world with a book that enshrines Balanchine’s most celebrated work for generations to come.

Film: Playwright August Wilson began his chronicle of the African-American experience throughout the … END_OF_DOCUMENT_TOKEN_TO_BE_REPLACED

Film: Just in time with the opening of movie theaters in Palm Beach County comes the season’s most … END_OF_DOCUMENT_TOKEN_TO_BE_REPLACED

Music: The very last concert Franz Joseph Haydn attended in his life was in March 1808, about a year … END_OF_DOCUMENT_TOKEN_TO_BE_REPLACED