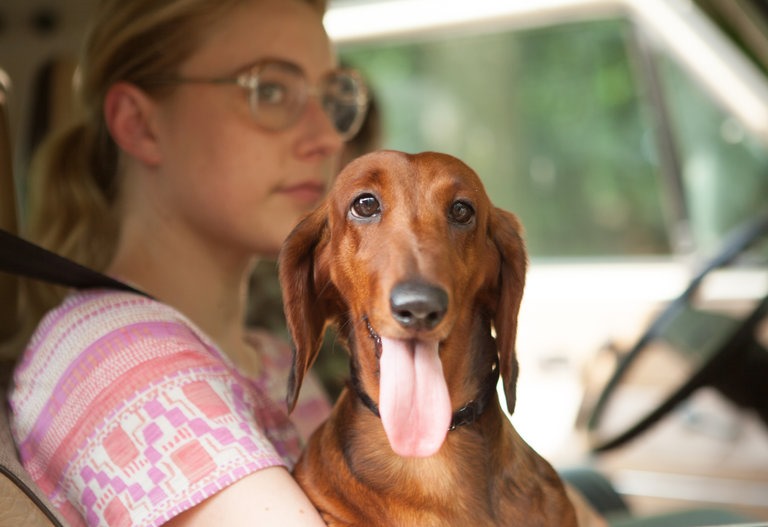 Greta Gerwig and the pooch in Wiener-Dog. (Photo by Linda Callerus)

Wiener-Dog may be Todd Solondz’s most Solondzian movie ever, and there is no image more Solondzian than his tracking shot of a seemingly endless train of dog diarrhea on a city street, scored to Debussy’s Clair de Lune. It’s simultaneously elegant and nasty, beautiful and repulsive, the cheekily contrapuntal example of a talented filmmaker wallowing in excrement and calling it art.

Sometimes he’s right to do so, as with his landmark magnum opus Happiness and its semi-sequel Life During Wartime. Other times he’s just the sadistic ringleader of his tortured marionettes, as with Palindromes andDark Horse. Wiener-Dog too often lapses into the latter, though its potential is vast, and it has narrative inventiveness to spare.

In a kind of winking postmodern echo of Bresson’s Au hasard Balthazar without the messianic gravitas, the main protagonist of Wiener-Dog is an animal, transferred among a series of owners whose lives and mental states it impacts. The dachshund’s tale begins in a dog shelter, where he is adopted by Danny (Tracy Letts) as a gift for his son Remi (Keaton Nigel Cooke), a quintessential Solondz child unprepared for the harsh realities of a corroded and corrosive modern world. His miserable parents, Danny and Julie Delpy’s Dina, reside in what looks to be a spotless model home, an oppressive synthetic incubator for the quiet desperation of their marriage.

The pooch’s next owner is a recurring character in the Solondz-o-sphere, Welcome to the Dollhouse’s Dawn Weiner, this time played with magnificent awkwardness by Greta Gerwig. She’s a vet who saves the dog from certain death, and before she knows it, she’s bringing it along on an impromptu road trip to Ohio with a charmless old classmate, Brandon (Kieran Culkin), with whom she’s just reconnected. They pick up a hitchhiking band of multigenerational mariachi, purchase drugs for Brandon to consume, and ultimately wind up at the residence of his developmentally disabled brother Tommy (Connor Long), where Brandon has some unfortunate news.

Inexplicably, the wiener-dog then winds up in the care of Dave Schmerz (Danny DeVito), a tweedy film professor with a lousy screenplay in a purgatorial state of pre-development. An epically pathetic Solondz punching bag, Dave dispenses fusty advice on storytelling formula to college students who would rather discuss queer cinema theory and gender fluidity. The dachshund’s final owner, Nana (a pungent Ellen Burstyn), is a blind, loveless crone awaiting a visit from her wayward, money-seeking granddaughter Zoe (Zosia Mamet) and her pretentious artist boyfriend Fantasy (Michael James Shaw).

Solondz’s best movies are rich interconnected tapestries, and Wiener-Dog isn’t one of them. Rather, it’s a linear compilation of short films — bisected by a retrograde green-screened “intermission” that ranks among the freest and funniest sequences Solondz has ever filmed — linked by tenuous themes: reproduction, death, disease, loneliness, estrangement of family and the inability of art to provide comfort.

These are admirably heady ideas for a philosopher-filmmaker like Solondz to broach, and it’s too bad he dilutes their impact by, once again, treating his creations like piñatas. Whether it’s the overhead shot of Dave that deliberately emphasizes DeVito’s unattractive girth or the uncouth image of Burstyn drinking an entire bottle of Kaopectate, Wiener-Dog is littered with withering insults at the characters’ expense. Even when it’s funny, it leaves an acidic aftertaste, shaming us into laughing.

Yet there are aching moments in each of the film’s segments in which agonizing realities intrude on the facile dark comedy — Brandon and his brother discussing their father, Zoe genuinely beseeching Nana’s advice on her boyfriend’s potential infidelities. Solondz is too much of an ironist to embrace them for their full emotional impact. But even at arm’s length, and despite Wiener-Dog’s propensity for easy targets and casual cruelty, this is a potent wail of anguish at a looming apocalypse, a meditation on mortality that cuts painfully across generations. Like a peripatetic dog, we’re along for the brief ride, witnessing the moral decay until we run off our leash.

Film: Playwright August Wilson began his chronicle of the African-American experience throughout the … END_OF_DOCUMENT_TOKEN_TO_BE_REPLACED

Film: Just in time with the opening of movie theaters in Palm Beach County comes the season’s most … END_OF_DOCUMENT_TOKEN_TO_BE_REPLACED

Music: The very last concert Franz Joseph Haydn attended in his life was in March 1808, about a year … END_OF_DOCUMENT_TOKEN_TO_BE_REPLACED