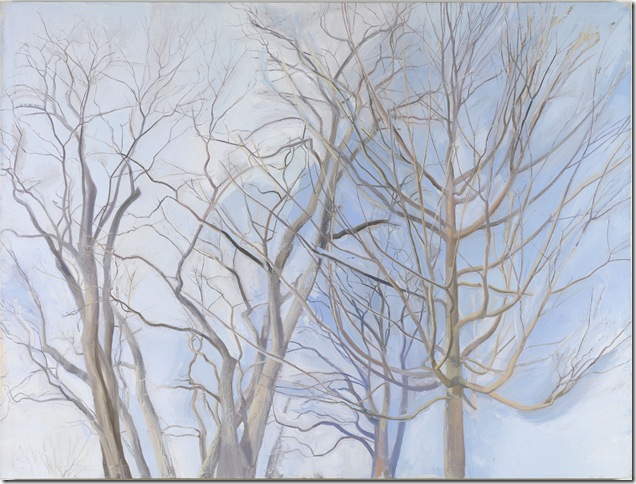 “It’s like you’ve painted cold air, atmosphere — achieving that intangible quality,” said Cheryl Brutvan, director of curatorial affairs and curator of contemporary art at the Norton Museum of Art, to Sylvia Plimack Mangold during a Curator’s Conversation event held Sunday at the museum.

Plimack Mangold was there for the opening of Sylvia Plimack Mangold: Landscape and Trees, which Brutvan organized. The exhibit is on view until March 3 and showcases 60 paintings, drawings, watercolors and prints that span 30 years of Plimack Mangold’s oeuvre.

“Yes, I am doing that,” Plimack Mangold replied and also confirmed another of Brutvan’s observations, a comparison to Cézanne: “I look at him in awe.” Brutvan quotes Cézanne in the exhibit’s accompanying catalog as saying, “As a painter I am becoming more clear-sighted in front of nature, but … I cannot attain the intensity that is unfolded before my senses.”

Plimack Mangold was struck by that intensity when she and her husband, artist Robert Mangold, moved from New York City to the Hudson Valley in the early 1970s. Like Cézanne, her genius lies in her explorations of the shapes and forms the natural landscape provides. She’s not aiming for a visceral reaction, though. She’s immersed in the individual elements of what she paints. The fact that she so poignantly captures the essence of the bigger picture of her surroundings is the secondary outcome of her hyper-keen observational skills.

It wouldn’t be surprising for someone to look around Landscape and Trees and decide that Plimack Mangold simply paints pretty pictures. Yet there’s great depth to her work in its surface preoccupation with artistic process. Prior to moving to the Hudson Valley, she’d embraced minimalism, like her husband. She’d been recognized for acrylic paintings of floor tile and wooden floors, close-up snapshots. “Up to this time my subjects were interiors, both literally and psychologically,” she recalled. 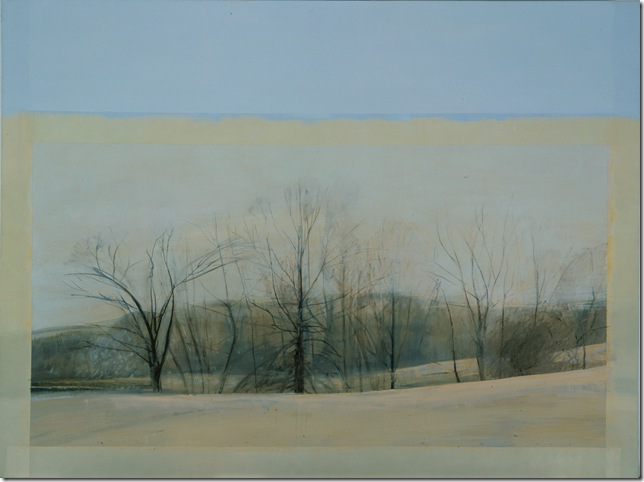 By 1975, these interior paintings included trompe l’oeil depictions of the tools that aided their creation — steel tape measures and masking tape. Her husband explains in a catalog essay, “…she started to make paintings about the making of paintings…” At that time, her work focused on the interplay between illusion and reality.

It seems natural that her focus shifted to the Hudson Valley shortly after she relocated there. The region’s scenic vistas have provided inspiration and haven to many artists, including Thomas Cole, Frederick Edwin Church and even recently Marina Abramovic. She switched from acrylic to oil paints, too, in order to better capture the “luminosity” the landscape provided. Yet she resisted the urge to be swept away by it.

Landscapes and trees simply become new conduits for her continued preoccupation with shape and form and with the art of observation. January 1977, a painting that calls to mind Andrew Wyeth’s symbolic windows, captures the moment of transition. “I got the idea to paint a snow scene and I made a painting on a piece of paper and taped it to the canvas to determine where it would work and look best. Then I imitated the painting in acrylic,” she explained. The painting within the painting still brings the viewer back and forth between reality and the illusion of depth. 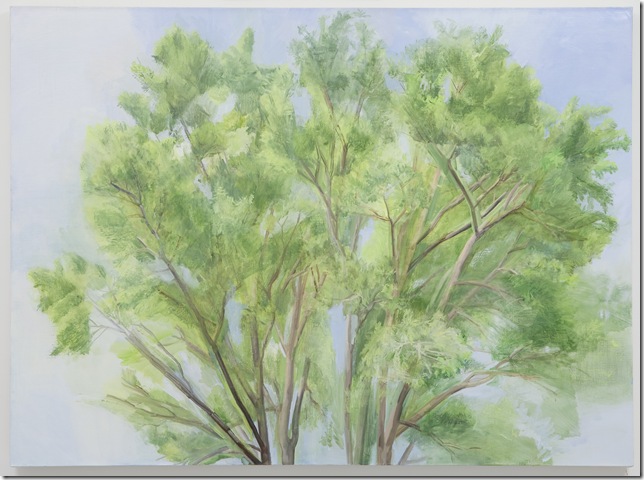 She wrote, “Nature is comfort — it is liberating to be surrounded by field and sky and trees….” Yet her professed attachment to it is cerebral. She treats the trees she paints — the pin oaks, locusts, elms and maples found outside her studio — the way Giorgio Morandi treats the containers in his still lifes. She paints the same trees time and again, but it’s not about emotion, it’s about presence.

“Do you get attached to the trees?” Brutvan asked.

“I get attached to the forms,” Plimack Mangold responded, adding, “It’s sad when some of the limbs get broken off. I think, ‘Oh no! I need that over there.’”

The trees then become metaphors for the passage of time. Works such as The Locust Trees with Maple (1990) also demonstrate an anthropomorphic element. In her artist’s notes she writes, “You could say that it’s about a relationship between these two trees and it could be a husband and a wife … it could be any relationship.”

Gradually, as the years pass, she literally breaks through the figurative glass window pane and takes her work outdoors. It then becomes more difficult not to compare her depictions of trees in works such as The Pin Oak (Summer) (2002) to those in romantic works by Thomas Cole, such as View on the Catskill: Early Morning (1836-37) or Catskill Creek (1845). It seems like nature has chipped away at her detachment. Recent works, such as The Maple Tree (Summer) (2011) seem expressionistic, abundant and colorful. Yet still she writes, “I’m not expressing myself. I’m working.” 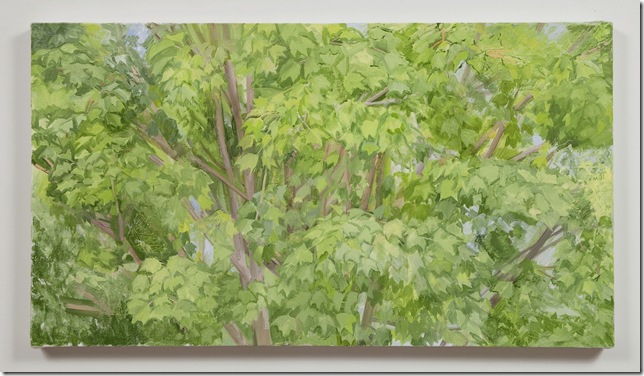 She works, though, in a location just named one of National Geographic’s top 20 locations in the world to visit in 2013. Can someone who has never been there appreciate how aptly she captures the “cold air” of the Hudson Valley winter that Brutvan referred to? When questioned about her emotional response to her surroundings, Plimack Mangold replied, “Of course it’s there, but I play it down.”

But does she really?

Jenifer Mangione Vogt is a marketing communications professional and writes about art and Italian culture. Visit her blogs at http://www.fineartnotebook.com and http://www.cosibuono.com.

Sylvia Plimack Mangold: Landscape and Trees is on view at the Norton Museum of Art until March 3 and is the second annual RAW: Recognition of Art by Women exhibit in the series that began last year to promote living women artists. Hours for this show are Tuesday, Wednesday, Friday and Saturday from 10 am until 5 pm, Thursdays from 10 am until 9 pm, and Sunday from 1 pm until 5 pm. Admission is $12 for adults, $5 ages 13-21, and free for children under 13. Palm Beach County residents receive free museum admission on the first Saturday of each month. For more information, call (561) 832-5196, or visit www.norton.org.

Film: Playwright August Wilson began his chronicle of the African-American experience throughout the … END_OF_DOCUMENT_TOKEN_TO_BE_REPLACED

Film: Just in time with the opening of movie theaters in Palm Beach County comes the season’s most … END_OF_DOCUMENT_TOKEN_TO_BE_REPLACED

Music: The very last concert Franz Joseph Haydn attended in his life was in March 1808, about a year … END_OF_DOCUMENT_TOKEN_TO_BE_REPLACED