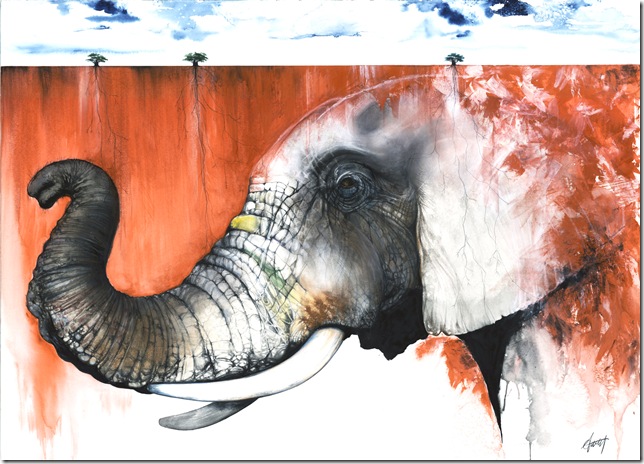 Collaboration: African Diaspora, which concluded at the Armory Art Center on Nov. 9, was an intoxicating blend of art from a diverse group of talented black artists.

Self-described as a Harlem Renaissance-style exhibit, the show featured paintings and drawings, sculpture, crafts and jewelry from more than 20 artists and was co-curated by the husband-and-wife team of Anthony Burks and Trina Slade-Burks, both artists and owners of A.T.B. Fine Artists & Designers LLC, and Talya Lerman, the Armory’s director of education.

It wouldn’t have been entirely accurate to refer to the artists in this exhibit as African-American, because, as Slade-Burks explained, “All of our history comes from Africa, but then there are twists. Saying ‘African-American’ might disservice people from Haiti or Jamaica. So we simply say ‘black artist.’”
The diversity of the work that was as varied as the artists, ranging from decorative and beautiful to socially conscious and thought-provoking. There was also a literary component represented by The Mighty 9, a book that recounts the life journeys of nine African-American women writers, including Slade-Burks, Angelina Stewart, Ansonia Hixon, Damaa Bell, Jasira Monique, L. Medford, Kimberly Nyesha Smith, Melissa McKnight and Yulette Newman. 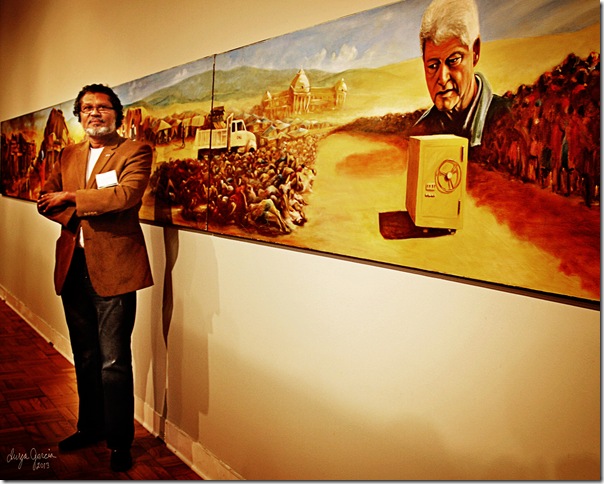 Beyond the shared ethnic heritage, the lack of a restrictive theme made it more interesting. Each artist brought something unique, displaying their viewpoints through their creative expression. A horizontal, untitled wall-length panel painting of Haiti by Haitian-born artist Carl Craig was a show-stopper. It depicted the aftermath of the 2010 earthquake, including the presidential palace ripped at its core, as though the fist of some temperamental god had landed directly on top of it.

Craig was raised in the United States, and before becoming an artist, he worked in the financial services industry and as an international development consultant in Haiti in some of the country’s most impoverished areas, including Cité Soleil. Given his evident talent, it’s hard to believe that he’s entirely self-taught. He’s explained that his aspiration with his art is “to expose the mystery, humility, intrigue and exoticism of the Haitian culture.”

A striking and beautiful bangle by metalsmith artist Simone de Bernard Mas immediately captured attention. Its complex design drew viewers closer to inspect the intricacy and delicacy. Paintings by young Haitian American artist JaFleu were visually mesmerizing in the way the colors were interwoven in a sinewy, spirally maze of purples, greens, rusts and oranges. “I’m inspired by a smile, song lyric or whatever it is God chooses to ignite me with at that moment,” JaFleu said. 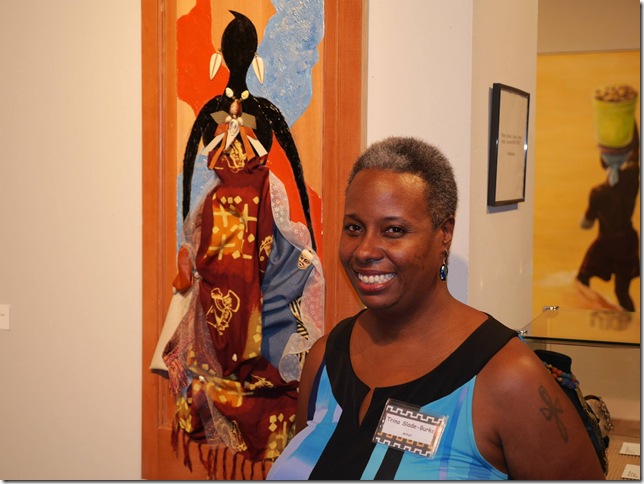 Works by Burks and Slade-Burks demonstrated the couple’s shared affinity for color and collage. Slade-Burks’s works were vibrant and joyful mixed-media paintings with fabrics adhered to them that added layer and texture. Her work is reminiscent of Miriam Schapiro, an artist from the ’60s and ’70s who helped to elevate traditional women’s crafts to high-art status. Like Schapiro, Slade-Burks infused her collages with a sense of movement and whimsy, which was apparent in Shirley, a work she created this year.

Burks’s work was beautiful, deep and powerful, including intricate paintings and drawings of animals that demonstrated his skill as a master draftsman, as well as a preoccupation with their strength, grace and beauty. This was evident in Red Elephant (2011). His work Noir Flamenco (2012), done in collaboration with Liz Segal, was a mysterious, evocative and compelling collage. In it, a half-nude masked woman, beautiful depicted in black and white, was accentuated by an elegant fabric and lace skirt. She appeared ageless, gazing directly at the viewer provocatively.

This was the first exhibit dedicated entirely to black artists done at the Armory Art Center. The Burkses were the driving force that brought it together and have been advocates for this type of collaboration for a long time. A year before the show, they approached Lerman with a rough concept. “I loved it and asked them to flesh it out so we could make it happen,” Lerman said.

Building on their strong ties to the community, they secured the participation of some of the most talented local black artists. “It says a lot for the county that there were so many talented black artists to choose from,” Lerman said. The exhibit was supported by the entire art community, not just the black art community. Over 500 people attended the opening. 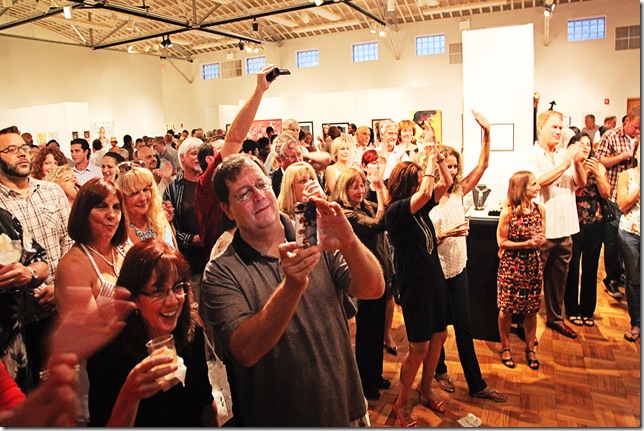 “What was rewarding was the fact that people of all races and cultures came to this event and were equally and personally touched by the climate of the exhibition. Many were brought to tears,” Slade-Burks said.

Lerman said that the collaboration was rewarding for her, too, and described the Burkses as, “wonderful, gracious, flexible, motivated and extremely hard-working.” She added, “We worked so well together we want to do it again and often.”

It’s no surprise that the Burkses are already working on more collaborative exhibits for 2014. If the success of Collaboration: African Diaspora is any indication, they’ve shown they can make things happen.

“They are what I call ‘community catalysts,’” Lerman said. “They’re so good at finding ways for everyone to work together and providing new and exciting opportunities for artists in our area.”

Though the exhibit has ended, Anthony and Trina Burks, co-curators of Collaboration: African Diaspora, will be speaking about it, and future plans for more collaborative exhibits, at Elle Schorr’s Multi/Mixed Media Art Salon at 6:30 p.m. Tuesday, Dec. 3, in the library at the Armory Arts Center. The center is located at 1700 Parker Ave, West Palm Beach. There is a $10 admission charge.

Film: Playwright August Wilson began his chronicle of the African-American experience throughout the … END_OF_DOCUMENT_TOKEN_TO_BE_REPLACED

Film: Just in time with the opening of movie theaters in Palm Beach County comes the season’s most … END_OF_DOCUMENT_TOKEN_TO_BE_REPLACED

Music: The very last concert Franz Joseph Haydn attended in his life was in March 1808, about a year … END_OF_DOCUMENT_TOKEN_TO_BE_REPLACED