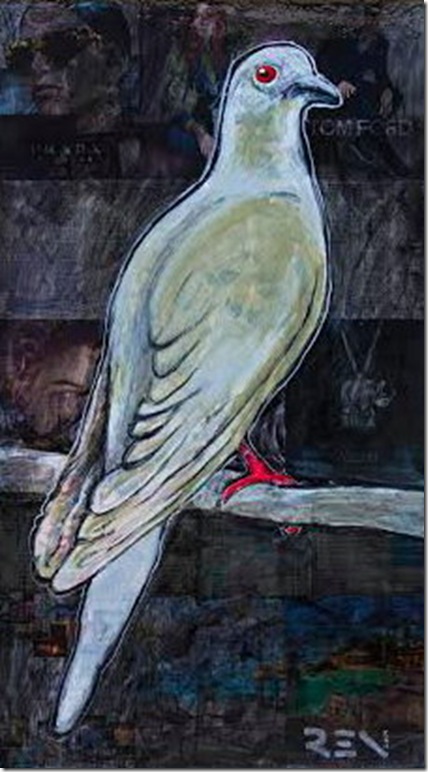 Agata Ren wants to raise awareness of endangered and extinct animals and plants with her art.

Her subjects include an Eastern cougar, a Northern rockhopper penguin, a Florida green turtle, and a south Florida rainbow snake.

And she is doing it with sparkle.

There is lots of glitter in her work, and bright colors and endearing portraits of animals and plants.

“I love sparkles. It’s fairy-like. (And) bling, people love bling. It has to do with the current time, bling and Pop Art is big today,” says Ren, who lives in Boca Raton.

For example, for a shiny gold sculpture called Dazzling Okapi, made from recycled materials, Ren painted the eyes and hooves a bright pink.

“The gold and pink is about Pop Art. It speaks to your imagination,” Ren explains.
“It says, ‘Look at me!’ ” 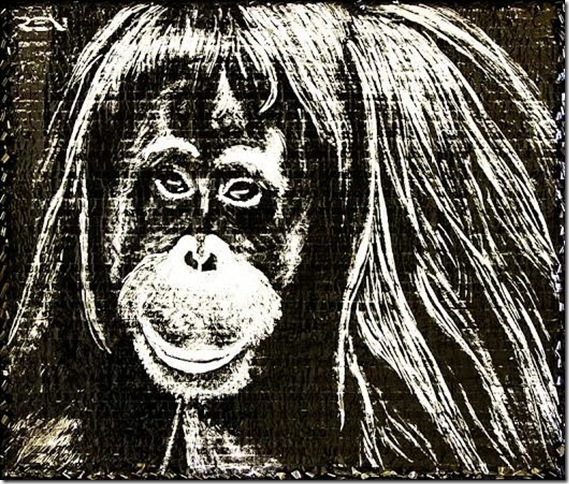 Geri, the Orangutan From the Entertainment Industry, by Agata Ren.

A 19-piece collection of Agata Ren’s art is on display at the Highland Beach Library through April 26.

More than anything the faces of the animals draw you in. Like the face of Geri, the Orangutan From the Entertainment Industry, which Ren painted in white on a canvas and frame made of old VHS tapes.

Or Pygmy Three-Toed Sloth, a cheery portrait in blue and white atop a wood grain background.

Or the family portrait of three wild Syrian asses.

“I want the first impression to be friendly and welcoming and charming,” Ren says.

“I want to invite people and once they start to interact, they might find other things in it … Once I have their attention with the main figure if they are interested, they might find things they didn’t expect.” 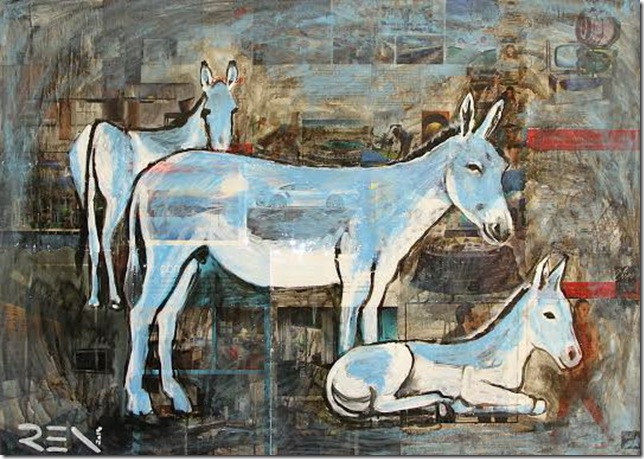 Look closely at the background of many of her paintings and you will see a collage of images from magazines, of things humans seem to be preoccupied with peering through the background.

“I use magazine collages because it does reflect media and the age of information. It shows what people are interested in and what products are being advertised,” Ren explains. “Once the collage is complete, I draw an animal and then I paint layers on top of layers of paint trying to quiet all those images that are triggers to humans. Once I cannot hear those images any longer, I paint the animal and let it speak loud for attention.”

The tree limb the pygmy three-toed sloth is gripping is also a collage that Ren has painted over.

She started this series of paintings of extinct and endangered animals in 2013 with a bright and colorful portrait of a dodo. 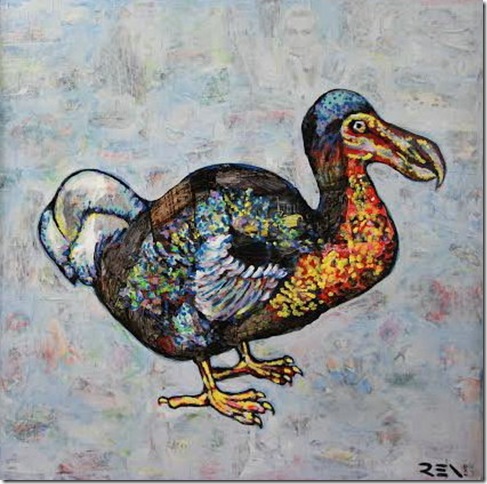 “I started (in) November 2013 painting recently extinct animals. I found it so sad that a whole species of animals would be extinct forever from our planet because of human impact and I wanted to create a monument for those beautiful creatures. Then later on, I included endangered animals as well to help them not to go extinct by showing them to people, creating awareness and hopefully change our impact in a positive way,” Ren explains.

She also paints endangered and extinct plants and flowers such as the Ashe magnolia and cup and saucer vine.

Not surprisingly, Ren considers her art “very green. My whole way of thinking is green.” In fact, she and her family will be building the first home in Boca made from reclaimed materials.

And so it makes sense that for her art, Ren uses mostly up-cycled material. 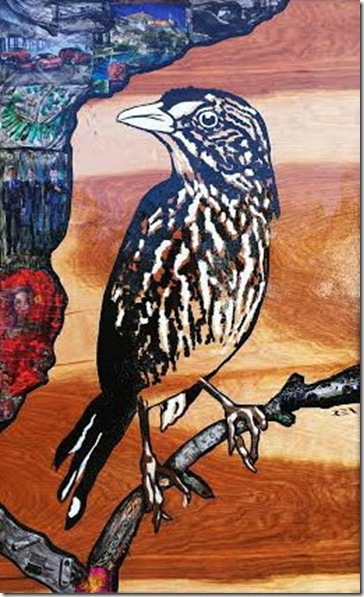 “I use in most of my paintings about 80% up-cycled material. For the VHS project it was probably about 98% of up-cycled material. I love the idea to repurpose material, to give it a rebirth rather then having it in a landfill. It just goes hand-in-hand with the idea why I paint endangered animals.”

Ren, who is from Germany, graduated from the University of Applied Sciences in Düsseldorf, Germany, in 2005 with a university degree equivalent to that of a U.S. master’s degree. She studied art, photography, design, illustration and film for six years.

Before settling in Florida in 2009, she traveled the world photographing and painting. She lives in Boca Raton with her husband and two daughters.

Film: Playwright August Wilson began his chronicle of the African-American experience throughout the … END_OF_DOCUMENT_TOKEN_TO_BE_REPLACED

Film: Just in time with the opening of movie theaters in Palm Beach County comes the season’s most … END_OF_DOCUMENT_TOKEN_TO_BE_REPLACED

Music: The very last concert Franz Joseph Haydn attended in his life was in March 1808, about a year … END_OF_DOCUMENT_TOKEN_TO_BE_REPLACED