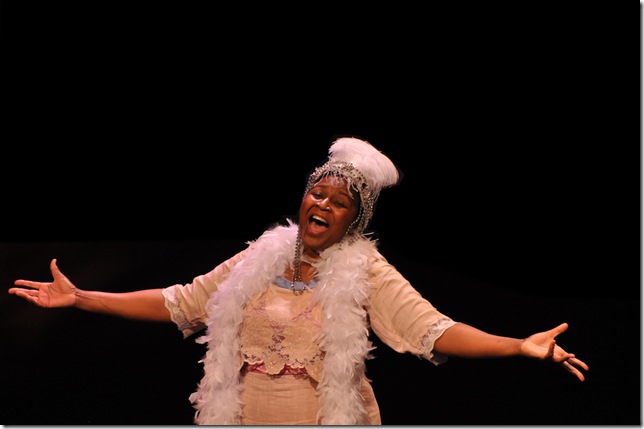 Hattie McDaniel packed a lot of living into 57 years. She wrote songs, sang on stage, radio and TV, performed in movies and on television, and is perhaps best known as the first African-American to win an Academy Award, for her stellar supporting role as “Mammy” in Gone with the Wind.

Accompanied only by talented musical director Toni Stamos on piano, Russell revives many of McDaniel’s top-flight tunes, from “Old Man River” to “I Thought I’d Do It,” from “St. Louis Blues” to “I Still Suits Me,” the song written specifically by Oscar Hammerstein and Jerome Kern for the 1935 movie, Showboat. In the film, McDaniel and Paul Robeson sing it as a duet. In the Delray show, Russell keeps switching between a straw hat and head scarf as she vocalizes both parts.

With sophistication and flair, Russell steps gently into the McDaniel role. She gets a big assist from scenic artist Cindi Taylor who has recreated the nostalgic, dusty innards of Denver’s Orpheum Theatre on the Delray stage.

With just a modicum of enticement from director Randolph DelLago, the actress picks up on the McDaniel role quickly and easily. The ancient props and costumes become metaphors for memories — of Hattie’s parents who had been slaves, her 12 siblings (she was the youngest of the 13), her five husbands and the years she spent making movies and earning so little, she had to keep her job as a maid and washerwoman.

The time is 1952, and Hattie is about to be diagnosed with deadly breast cancer. Amid the dust, she picks up an old hat here, a boa there and the head scarf she wore when she acted opposite Clark Gable in GWTW. Her life is making one final encore.

The character accompanies her memories with songs. When Hattie thinks of her childhood, she sings with a young girl’s warble. Soon, she matures, and her voice softly deepens.

Overall, Russell’s portrayal of McDaniel is subdued, and her voice follows suit. She sings “Danny Boy” with the tremor of a woman smitten by the man she hopes to spend her life with — Danny, the man she loves, but who loves to play craps. After a gunshot is heard offstage, he does not return.

Hattie recalls Danny until the end of her own days.

Russell does each of McDaniel’s tunes justice. She doesn’t overplay them, not even “Gimme a Pigfoot and a Bottle of Beer,” a comic look at African-American gustatory choices. The singer cooks up a nice take on Bessie Smith’s “Kitchen Man.” And Stamos opens “Birth of the Blues” with a toe-tapping, honky-tonk entry that makes this vocal one of the best in the show.

Hi Hat Hattie is not Russell’s first shot at recreating the life of a famed black performer. A couple of years ago, she trod upon this same stage in Ethel Waters: His Eye Is on the Sparrow. Neither Waters nor McDaniel had an easy life, but Hattie didn’t seem to suffer quite as much. Over the years, she befriended many of the white actors with whom she appeared in films. Three of her own siblings also took a crack at acting. In fact, her brother, Sam, appears as a butler in the 1948 Three Stooges short, Heavenly Daze.

Parr’s production doesn’t dwell on McDaniel’s problems. But it does focus on her near career-ending troubles with the NAACP and its boss, Walter White. Oddly, blacks were attacking her for consistently portraying domestic servants. White initiated a boycott of her films, something that drove her to the brink of suicide.

But Hattie draws upon the strength her parents instilled in her, and ultimately faces down the NAACP head. In this dramatic turnaround, Hattie sums up her feelings this way: “I’d rather play a maid in a movie for $700 a week than be a maid and make $7 a week.”

The play also notes parenthetically that McDaniel and fellow black activists managed to convince producer David O. Selznick to remove “the N word” from Gone with the Wind, perhaps saving the film from the wrath of contemporary political correctness.

Film: Playwright August Wilson began his chronicle of the African-American experience throughout the … END_OF_DOCUMENT_TOKEN_TO_BE_REPLACED

Film: Just in time with the opening of movie theaters in Palm Beach County comes the season’s most … END_OF_DOCUMENT_TOKEN_TO_BE_REPLACED

Music: The very last concert Franz Joseph Haydn attended in his life was in March 1808, about a year … END_OF_DOCUMENT_TOKEN_TO_BE_REPLACED