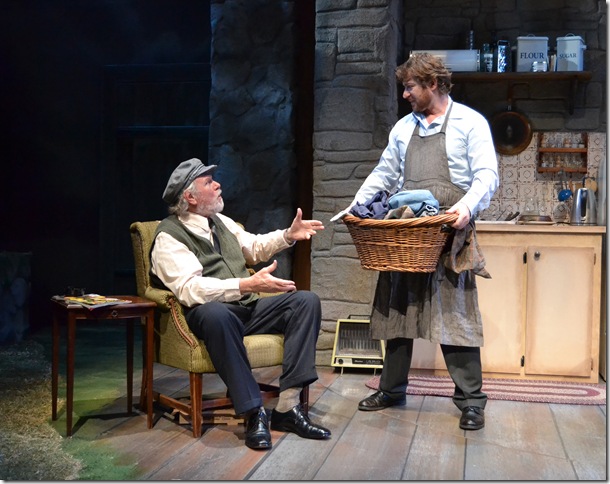 Alex Wipf and Nick Hetherington in Outside Mullingar. (Photo by Samantha Mighdoll)

For its fourth play of its 16th season, Palm Beach Dramaworks serves up a change of pace.

For starters, John Patrick Shanley’s Outside Mullingar is a comedy, in fact a romantic comedy. And rather than “theater to think about,” the West Palm Beach company’s motto, it is more theater to touch the heart.

“It’s a comedy, but comedies can be thought-provoking,” argues J. Barry Lewis, the production’s director. “It’s about how people find their way to one another.”

Shanley won the 2005 Pulitzer Prize for the Catholic school drama Doubt, but is probably best known for writing the screenplay for Moonstruck, an Italian love story that earned him an Oscar.

Outside Mullingar, which had a brief Broadway run in 2014, was prompted by his 60th birthday, when Shanley decided to write about his ancestors and their family farm in the Irish Midlands. And the obstacle-strewn romance between Anthony Reilly and Rosemary Muldoon, who have lived on adjacent farms all their lives.

“People have said that it’s the Irish ‘Moonstruck’,” says actress Kathy McCafferty, who plays Rosemary. “We’ve also talked about it being very similar to ‘Danny and the Deep Blue Sea,’” an early work of Shanley’s about a pair of stubborn would-be lovers from The Bronx. “Two people who are flawed and don’t seem to find a place in the world, hoping to find a place with each other.”

In addition to the romantic aspects, Outside Mullingar touches on many other themes, including the economic realities of possibly losing the family farm. “There’s a lot at stake, because you’re also talking about generations that are connected to, and have lived on, the land,” adds Nick Hetherington, playing Anthony. “There’s the potential for a huge amount of loss and that’s not a funny situation. But it’s funny the way it’s presented.”

“Certainly it deals with forgiveness, making peace with parents and children, that’s a pretty significant piece of it,” says McCafferty. “I also think it deals with the very real, relatable fear that your life might not work out the way you hoped it would.”

As in many of his plays, characters must risk a great deal to achieve a romantic bond. “Shanley talks about love being as fragile as it is,” notes Lewis. “That when a very sensitive soul makes a foray into full-out love and then the door gets slammed in his face, what happens to that fragile soul?”

As with most romantic comedies, it should be obvious from the start that Rosemary and Anthony were made for each other. “I don’t think it’s a surprise at all to realize that this is probably going to have a happy ending. It’s not what’s going to happen, but the how,” says Lewis. “If they’re going to end up happily ever after, which we hope that they do, but how does it happen? There seems to be an enormous number of hurdles along the way, from so many different angles that involve personality and people and family and land.” 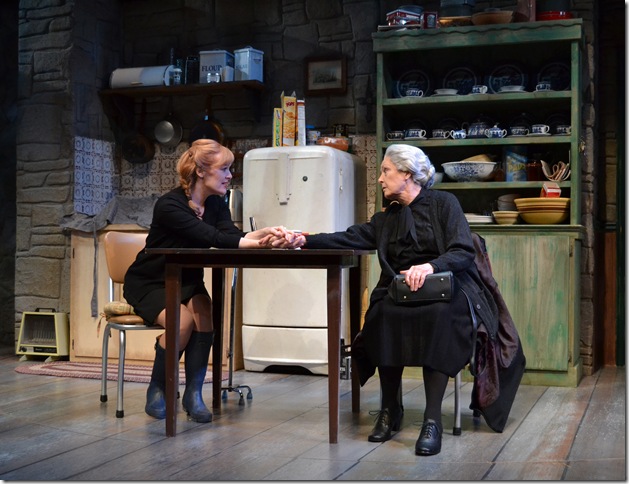 Kathy McCafferty and Patricia Kilgarriff in Outside Mullingar. (Photo by Samantha Mighdoll)

Both McCafferty and Hetherington are New York-based actors making their Dramaworks debuts. She saw the play on Broadway and recognized herself in Rosemary, drawn to the character for “having to be brave for love and fight for love. The connection to family is something I definitely relate to,” says McCafferty. “I see this play as being a test of faith, what happens to your faith when things don’t start to work out your way. That’s what I’m most drawn to in her, that journey of faith.”

“I’m a Shanley fan, so I read it early on when it first came out, maybe a year-and-a-half ago,” says Hetherington. “Sensitivity is something that draws me in. Anthony has one less layer of skin than most people around him. And it’s really fascinating watching people with all these things going against them, all that suffering, all those obstacles, how are they going to get the thing they most desire? For me the challenge is finding that balance, that sweet spot between the long-suffering and the levity, in an entertaining and truthful way.”

McCafferty agrees that Outside Mullingar has a surprising amount of comedy. “It’s an incredibly funny play, so that presents another challenge, getting to the truth underneath the comedy,” she says. “How people navigate love is just funny.

“It’s deeply funny and it’s a love story that anyone can relate to, at any stage of life. It is a joyful experience,” says McCafferty. “You see the reward of being brave in love and that’s something to be celebrated.

Film: Playwright August Wilson began his chronicle of the African-American experience throughout the … END_OF_DOCUMENT_TOKEN_TO_BE_REPLACED

Film: Just in time with the opening of movie theaters in Palm Beach County comes the season’s most … END_OF_DOCUMENT_TOKEN_TO_BE_REPLACED

Music: The very last concert Franz Joseph Haydn attended in his life was in March 1808, about a year … END_OF_DOCUMENT_TOKEN_TO_BE_REPLACED