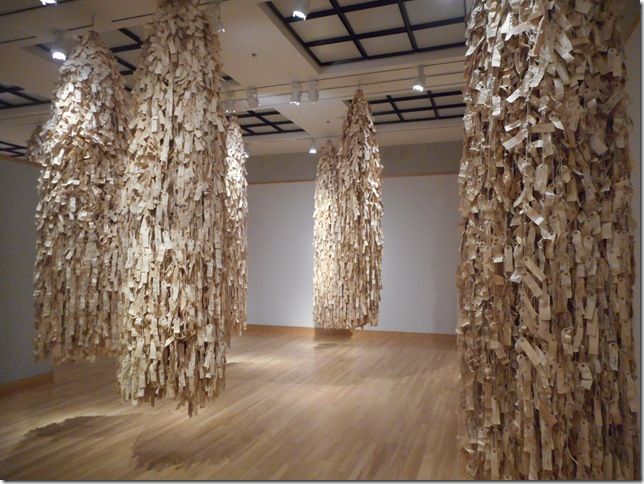 We are often moved by art, but what is art moved by? Tragedy. Joy. Death. Life.

Two dramatic exhibitions now on view at the Morikami Museum feature artworks born out of ashes and out of the necessity to cope with loss.

Running through Jan. 31, Wendy Maruyama: Executive Order 9066 revives a particularly sad time to mark the 70th anniversary of the closing of the last Japanese internment camp. Jimmy Tsutomu Mirikitani is meant as an exploration of an artist’s life through his work because it deserves to be known. Both are armed with truth and heart.

The 1942 campaign that dragged thousands of people of Japanese ancestry — even American citizens — out of their homes into internment camps is the core of Executive Order 9066. Maruyama doesn’t just touch upon this chapter; she drags it from the pages of the history books and plants it right in front of us in the form of name tags and suitcases used during the relocation.

Included in this exhibit are wall-mounted cabinets and objects made and owned by the internees. One example is the bird pins said to have been gifted to internee Yone Yoshioka from a fellow internee at Poston, Ariz. Each pin is attached to a twig using metal wire. An odd display consisting of a large black square features an opening from which a short Popeye film can be watched. The film is titled You are a Sap, Mr. Jap.

But the most commanding section is the 10 gigantic paper lamps suspended from the ceiling representing the 10 internment camps in the United States. Each consists of identification tags — sporting names and numbers — that were recreated by this third-generation Japanese-American artist. The names of all 10 camps are reflected on the floor, below each lamp. Maruyama called this The Tag Project. Its massive volume makes the event an undeniable fact and seems to restate it: Yes, this happened.

Among these camps, one based in California — Tule Lake — was home to the Japanese-American artist being explored in the second exhibit. Named after its protagonist, Jimmy Tsutomu Mirikitani features less somber adaptations of equally traumatic experiences. 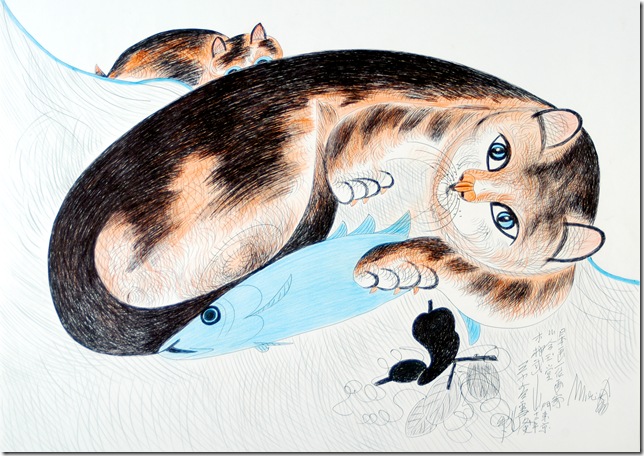 Colorful child-like drawings take on big serious subjects such as the atomic bomb and the Sept. 11 attacks. The compositions are similar, with the vivid colors making up for the simplicity in execution. Oversize structures appear overwhelmed by bright orange flames and black smoke clouds. Ant-size figures are shown trapped at the bottom of the frame. There are also slight differences suggesting the thought put into them. For instance, unlike those depicted in Hiroshima Peace Memorial, the figures trapped in the chaos of World Trade Center 1 are drawn lying down; very few appear standing.

The 29 artworks on view, created between 1999 and 2006, represent a small selection of the artist’s work, considering Mirikitani lived to the age of 92. But they constitute a powerful introduction to a man with a life story like no other. Mirikitani lost relatives and friends to internment camps and Hiroshima’s atomic bombing only to end up homeless in the streets of New York City selling art, before being reunited with a sister he had not seen in 60 years.

A series of landscape drawings reflect his feelings toward Tule Lake, the place of his incarceration following the attack on Pearl Harbor. The choice of soft peachy colors and minimal lines are the opposite of what we would expect. Nothing suggests hatred or hard feelings. There are no traces of anger or violence here. It is a surprisingly soothing response to the cruel event that separated him from his sister, Kazuko.

The painful memories are there though, in the two smallest pieces depicting a gravesite and a cross at the hilltop. Both reference the journey that relatives and former internees made to the camp site every two years. The gravestones have been marked red and a preserved flower appears pressed against the glass frame.

To survive in the streets, Mirikitani sold playful drawings depicting cats, flowers and fruits. They reflect undying optimism and an unexpected innocence. His felines have a distinctive long dark tail and almond-shaped eyes and it would be fair to assume it is the same cat, posing with different fish, in all the frames. Even the most cheerful drawing, Cat Taking Sun Bath in Autumn, cannot escape the artist’s dramatic background.

Despite the warmth of this lush, idealistic tropical scene, a question persists: How did he get past the pain? How did he manage to create anything resembling happiness?

The answer is the point both of these ongoing exhibitions aim to make.

Wendy Maruyama: Executive Order 9066 and Jimmy Tsutomu Mirikitani, are on display through Jan. 31 at the Morikami Museum and Japanese Gardens in Delray Beach. Tickets: $15, $13 for seniors, $9 for children and college students. Call 495-0233 or visit www.morikami.org.

Film: Playwright August Wilson began his chronicle of the African-American experience throughout the … END_OF_DOCUMENT_TOKEN_TO_BE_REPLACED

Film: Just in time with the opening of movie theaters in Palm Beach County comes the season’s most … END_OF_DOCUMENT_TOKEN_TO_BE_REPLACED

Music: The very last concert Franz Joseph Haydn attended in his life was in March 1808, about a year … END_OF_DOCUMENT_TOKEN_TO_BE_REPLACED