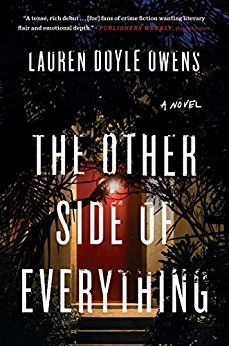 “I was living through the worst time of my life. I was going to kill myself.”

That statement is not from the west Broward mystery, The Other Side of Everything, the debut novel by Lauren Doyle Owens, a 10-year resident of the area. Instead, it’s what the author said about her own life.

“I didn’t kill myself,” Doyle Owens said in a recent interview. “Instead, I wrote this story.”

“This book is about being lonely, depressed and living in isolation. It’s about what it feels like to go through something and then break through to the other side,” Doyle Owens said. She said the gut-wrenching adversity in her life made her a novelist.

The book begins with the shocking death of a lonely, elderly widow, her skull bashed in and her house torched. The plot revolves around her three neighbors, each of whom is frightened by the violence so close to home. One neighbor knew the victim almost 50 years, since they moved to the same development near the same time. The second is a woman, around age 30, a talented artist, who has recovered from cancer, had a hysterectomy, is suffering through a rocky marriage and a growing drinking problem. She hasn’t painted in three years.

The last is a 15-year-old girl, whose mother recently abandoned her. She’s waiting tables at a nearby diner and trying to figure out how to save what is left of her family.

Soon there are two more shocking murders to solve. Someone is viciously using weapons improvised from common household objects. All of the victims are older women who live alone. Presumably, they do not have enemies.

Doyle Owens’ book authentically describes the physical surroundings of a neighborhood built in the 1950s, in a rundown quiet pocket somewhere between the “dense sprawl” between Miami and Fort Lauderdale. It also truthfully depicts the inner thoughts of people who are depressed, out of options and losing hope.

The action takes place in the fictional Seven Springs, Fla., in the aftermath of the Great Recession, when “the boarded-up pink houses had gone beige.” Doyle Owens terms it “a creepy atmosphere.”

In the book and in real life, the neighbors are “the originals,” seniors who bought homes in the ’50s, as well as today’s young married couples, and struggling middle-aged parents and their teenage children.

The novel is true South Florida, right down to the amphibians and reptiles who thrive in the heat and humidity. As in, “A toad laid some eggs in my potting soil.” Doyle Owens also compares green and brown lizards. And she writes, with chilling understatement, of the two-legged reptiles who prey on motherless teenage girls and elderly residents who struggle in quiet desperation in what is supposed to be a tropical paradise.

Doyle Owens is an interesting writer. She is very descriptive and chooses interesting details, but never makes the mistake of overwhelming plot and dialogue with a florid writing style. She draws the reader into a realistic story with intriguing character dilemmas, apart from the murder mystery and the fear that the killer is still out there. She also gives her story depth and more layers, but having protagonists from three generations living close to each other, but sometimes at odds with each other.

All of them live in a community where there are plenty of huge banyans to enjoy, but the sidewalks are cracked. And two weeks after the first murder, the yard stinks of rotting mangoes and is overgrown with weeds.

The writer deals with depression without making the reader want to drop the book in despair. There is a feeling that the characters will pull themselves out of the morass, and the reader is rooting for them.

Doyle Owens’ next book, Another Life, is about long lost sisters. Whether or not it takes place in South Florida, it should be well worth reading.

The Other Side of Everything, by Lauren Doyle Owens; Touchstone, $25.

Sharon Geltner is the author of Charity Bashed, a funny Palm Beach mystery and social satire, available on Amazon.

Lauren Doyle Owens grew up in Towson, Md., outside Baltimore. She had wanted to be a writer ever since she was small. She got a master’s in fine arts from Florida International University, where she met her husband. But an MFA didn’t make her a writer. It took surviving real life to do that.

“When I graduated, I was too young. I had nothing to say … Ten years later, I fell seriously ill. Now I had a point-of-view perspective. Now I could write. And writing really helped me pull myself out of my misery.”

Doyle Owens added, “I was treated for cancer at age 29. I had a hysterectomy. That was the same year I was to be married. I was diagnosed in January, had surgery in April. During the summer I had chemotherapy and was married in September,” Doyle Owens remembers.

She moved to western Broward County in 2005. She had never wanted to live in Florida, much less the suburbs. She would rather have lived in Seattle, or a city in California. Doyle Owens visited Holland, Germany, Switzerland and Japan. She preferred all of them to Broward.

Her fiancé bought a home at the top of the real estate market.

“It was in complete disrepair; it took years to get it into shape,” Doyle Owens recounted.

“When I wrote this book, I was really thinking of my own neighborhood, where I’ve lived for 10 years,” Doyle Owens said.

These days, Doyle Owens says she enjoys leaving work in Miami and coming to her peaceful home, “a little slice of paradise.”

Film: Playwright August Wilson began his chronicle of the African-American experience throughout the … END_OF_DOCUMENT_TOKEN_TO_BE_REPLACED

Film: Just in time with the opening of movie theaters in Palm Beach County comes the season’s most … END_OF_DOCUMENT_TOKEN_TO_BE_REPLACED

Music: The very last concert Franz Joseph Haydn attended in his life was in March 1808, about a year … END_OF_DOCUMENT_TOKEN_TO_BE_REPLACED